It came with a 120/70 ZR17 front tire and a 180/55 ZR17 rear tire. Stopping was achieved via 2 x 300mm discs, 4 piston calipers in the front and a Single 220mm disc, 1 piston caliper in the rear. The front suspension was a 41 mm inverted Showa Big Piston Front fork with top-out springs, stepless compression and rebound damping, fully-adjustable spring preload, while the rear was equipped with a Bottom-Link Uni-Trak® with gas-charged shock, top-out spring and pillow ball upper mount, dual-range (high/low-speed) stepless compression damping, 25-way adjustable rebound damping, fully-adjustable spring preload. The ZX-6R Monster Energy Special Edition was fitted with a 17 Liters / 4.5 US gal fuel tank. The wheelbase was 1400 mm / 5.1 in long. 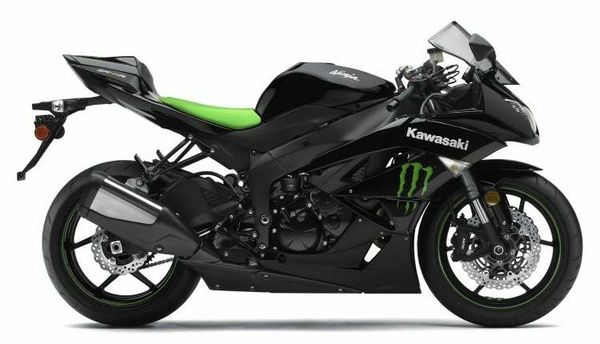 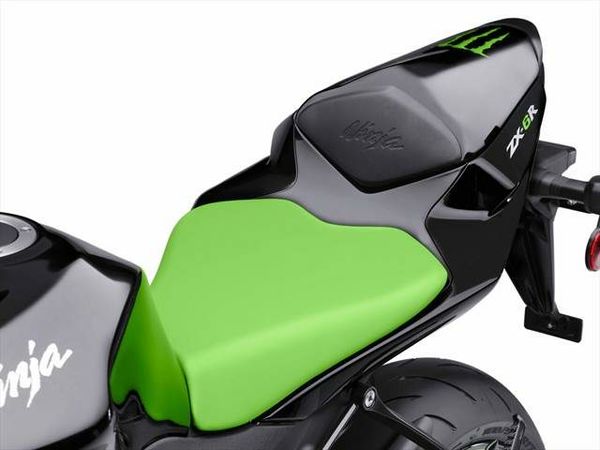 For riders looking to shock and awe their rivals, Kawasakis sinister looking 2009 Ninja® ZX-6R Monster Energy® Special Edition motorcycle is the weapon of choice. Dressed in all black, it promises a cranked-up heart rate for anyone with a pulse, thanks to the black bodywork, frame and wheels; highlighted by an aggressive Monster Energy graphics package. To truly push the envelope, a rider needs a calm yet responsive sportbike with precision control feel and confidence-inspiring manners. That machine is perfectly embodied by the new 2009 Ninja® ZX-6R. Thanks to an extensive overhaul by the Kawasaki engineers; weight shaving, improving mass centralization, refining engine and chassis behavior, adding a revolutionary front fork design; the new leaner, more precise Ninja ZX-6R delivers the elusive calm and confident handling that top racers need.

Fine-tuning the chassis and tightening its mass centralization resulted in lighter handling to make it even easier to tip this ZX-6R into a corner. To optimize front-rear rigidity balance, the engineers revised frame stiffness around the swingarm pivot and the rear engine mounts. The engine was rotated around the output shaft to offer a steeper cylinder bank angle and raise its CG by 16mm. A new exhaust layout with a short side muffler lowers the weight previously located under the seat and an exhaust pre-chamber further contributes to the new ZX-6Rs mass centralization

The new Ninja ZX-6Rs leaner physique is fundamental to its lighter handling. Both the engine and chassis were evaluated to reduce weight. The intake resonator box and supports for the instrument panel and mirrors are now unitized with the enlarged to optimize intake volume  Ram Air duct, contributing to weight savings and improving rigidity. New camshafts are now made of lighter SCM, and lightweight magnesium replaces aluminum for the engine covers. Revised internal gears  transmission, oil pump and starter  are lighter without compromising strength. Adjusting several mounting plates and the coolant reservoir locations helped shave additional weight.

Handling wasnt the only area of improvement on the new Ninja ZX-6R; its lighter engine received a host of changes focused on delivering precise throttle control and increased performance, particularly in the mid-range. A smoother power delivery was achieved through better combustion efficiency. The changes include; adding cylindrical guides to the top of the airbox to better guide the fuel charge into the intake funnels, increasing the distance between the main and sub-throttles by 10mm to reduce inlet turbulence, revised cylinder porting to improve cylinder filling and increasing secondary coil current in the ignition coils.

In addition to healthier bottom-end torque and smoother throttle response, the engines mid-range performance was increased via a similar number of refinements, including; new double-bore velocity stacks with inlets at two different heights, pistons with new profiles and improved crown finishing, and reduced mechanical loss by decreasing piston ring tension and revising the cam chain guides to better stabilize the motion of the chain. A new exhaust collector layout rounds out the major changes.

The stronger mid-range torque provides greater drive out of corners and is harmonized with the engines silky smooth high-rpm performance. This linear throttle torque delivery results in improved controllability and offers the rider precise throttle control at all rpm. This predictability pays dividends when making mid-corner power adjustments. When combined with the reduced need to downshift provided by its healthy mid-range performance, the predictable throttle response makes it easier for riders to maintain their rhythm when stringing corners together.

In keeping with its racing heritage, the ZX-6R employs a cassette-type transmission that simplifies gearing changes at the track, reducing set-up time and allowing more time for riding. A slipper clutch allows quick downshifts without upsetting the rest of the chassis when reducing speed on corner entry.

Corner-entry controllability receives a major performance boost, thanks to the first production-use of Showas revolutionary new BPF (Big Piston Front fork). The BPF utilizes a large-diameter internal piston, which permits a reduction in damping pressure, for smoother action and better front end feedback  especially under braking and initial corner turn-in. Additionally, the BPF eliminates many of the internal components used in a cartridge-type fork, simplifying construction and resulting in a lighter overall fork weight.

The response from Kawasakis acclaimed triple petal disc brake package with radial calipers was improved as well. The 220mm rear petal disc is now 10mm larger and features a revised brake lever thats now coaxially mounted with the footpeg for increased mid-stroke braking efficiency and improved feeling. Its master cylinder reservoir was relocated forward of the swingarm  freeing up space around the footpeg, reducing parts and contributing to weight savings. Trackside maintenance is easier too, thanks to the revised front brake hose routing with a three-way joint at the lower triple-clamp to simplify bleeding the brake lines.

All of these revisions give the Ninja ZX-6R unflappable composure under braking and help provide the precise control and feel that allows Supersport racers to enter corners harder. To better capitalize on this lighter machine and its precise control response, the rider interface was appropriately fine-tuned to enhance feedback from the bike to the rider.

The relationship of the seat-to-pegs-to-bar rider triangle was adjusted slightly, with the handlebars moved closer to the rider and turned in slightly for a more intuitive riding position. The fuel tank cover is more flared around its top edge, providing a larger contact patch and contributing to improved rider feedback  similar to the ZX-10R. A new narrower rear sub-frame and seat leading edge, plus a 10mm lower seat height provide a slimmer riding position and a shorter reach to the pavement.

A new fairing and a less-complex one-piece front fender  previously a three-piece unit  offer improved aerodynamics and airflow to the radiator, better wind protection and help minimize the effect of crosswinds. The new inner rear fender, mounted above the swingarm, reduces turbulence and helps keep the tail clean. Like its bigger ZX-10R sibling, the ZX-6R received a new instrument panel that provides information at-a-glance and a race-quality adjustable Öhlins steering damper with relief valve and twin-tube design.

Highly confidence inspiring, the precise engine and chassis control offered by the new Ninja ZX-6R enables riders to push harder and maximize the excitement that comes from actively controlling such a high-performance track-focused machine.

This time around, Kawasaki seem to be truly serious about hunting down the R6, CBR 600RR, GSX-R600 and even the Daytona 675. The 2009 ZX-6R is indeed an all-new bike  it shares nothing with its predecessor. And to begin with, the new bike looks really good  a perfect mix of aggression and sobriety.

The engine sounds relatively subdued when you start the bike, though the sound is still pleasant. And the riding position and ergonomics feel just right  you immediately feel comfortable on this bike.

On the move, the new engine is docile and smooth at low revs  if you insist, it will even putter along at 2,000rpm, in sixth gear, at 30km/h. But, of course, thats not what the ZX-6R is meant to do. The bike really comes alive between 8,000-16,000rpm and in that rev range, a handful of throttle instantly translates into hard acceleration and insane speeds. With ram-air, the ZX-6Rs 599cc inline-four makes 134 horsepower at 14,100rpm and, yes, the bike feels very responsive  the throttle twist-grip seems to be directly connected to the rear wheel. And it averages about 17.5km per litre of petrol, which is not too bad.

The new, fully-adjustable big-piston fork (BPF) from Showa is quite a revelation  the Kawasakis nose is always absolutely glued to the tarmac and the ride quality is not bad either. And the Nissin bakes, with radial mount callipers at the front, are very powerful  just two fingers on the brake lever are quite enough to bring the bike to a super-quick halt  but youd better be careful while braking hard in wet weather conditions and/or during an emergency.

The not-so-good: Styling too similar to the ZX-10R Readability of the instruments Wind protection provided by the fairing is inadequate