It came with a 120/70 ZR7 front tire and a 180/55 ZR17 rear tire. Stopping was achieved via 2x 310mm discs 4 piston calipers in the front and a Single 210mm disc 1 piston caliper in the rear. The front suspension was a 43 mm upside-down KYB fully adjustable, adjustable compression, rebound and preload. while the rear was equipped with a Uni-Trak adjustable compression, rebound and preload.. The ZX-9R was fitted with a 20 Liters / 5.0 US gal fuel tank. The bike weighed just 216 kg / 477 lbs. The wheelbase was 1410 mm / 55.7 in long. 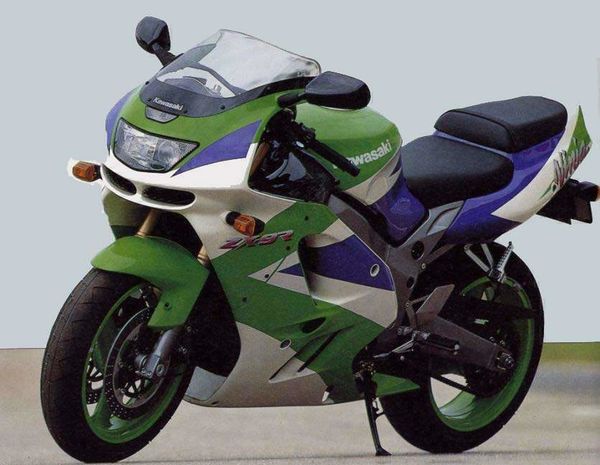 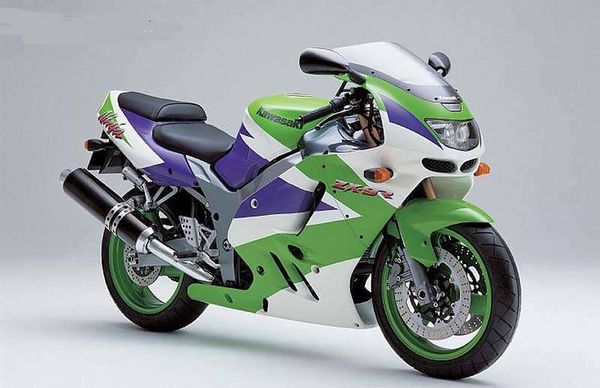 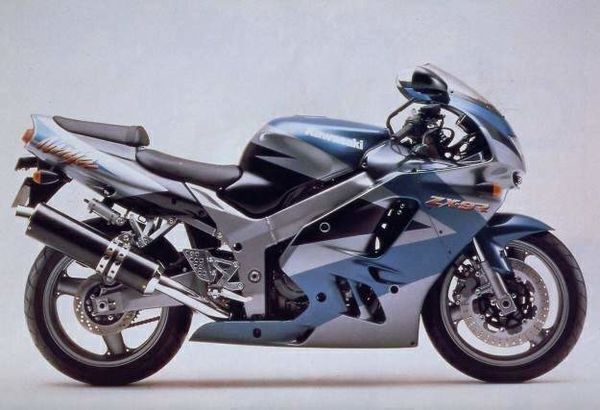 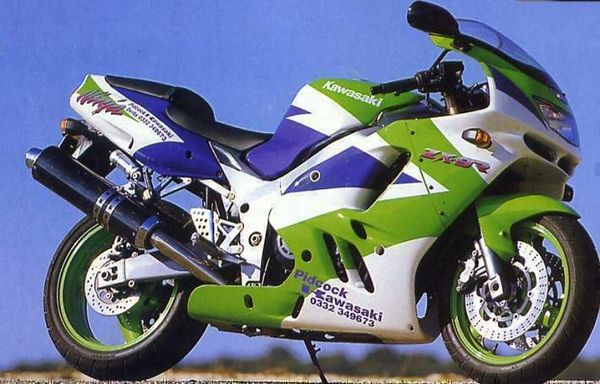 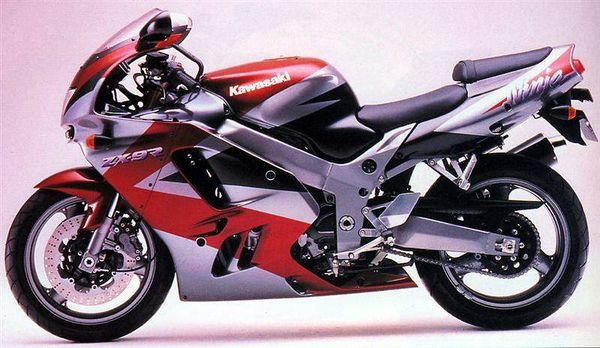 Kawasaki's tradition of building outstanding 900cc superbikes suggested that a hot new contender would appear in the mid-1990s. The z1 of 1973 and the GPZ900R Ninja of 1984 had firmly established the Big K's reputation for powerful, rapid and bullet-proof 900cc fours. And in 1994 came the model that was intended to maintain that reputation for another decade: the ZX-9R. The superbike world had become increasingly specialized since the days of the Z1 and Ninja, when a single brilliant new machine could outperform all opposition and be a top all-rounder at the same time. Nevertheless, Kawasaki designed the ZX-9R to fit between the firm's race-replica ZXR750 and sports-touring ZZ-R1100. Its style and emphasis were on performance, but the 9R was less extreme than some super-sports rivals. It was certainly one very rapid motorcycle, for all that. The Kawasaki's engine was an enlarged, 899cc version of the 749cc, liquid-cooled powerplant from the ZXR750. It had a ZZ-R1100 type ram-air system, big 40mm carburettors plus detailed smoothing of the induction and exhaust systems. The result was a peak output of 137bhp at 10,500rpm, and thrillingly strong power right through the rev range.

The Lauch The Kawasaki Ninja ZX-9R is unleashed on a sweaty, diarrhoeic Leonard in Malaysia. Poor lamb Dateline: Shah Alain Circuit, 7 December 1993. The day dawned misty and hot, rather like the night had been. After three months of British winter, arriving in the Malaysian monsoon season is a shock to the English system. After the cold crisp air of Blighty, breathing the tropical atmosphere is like being locked in a lavatory with a boiling kettle. The weather is drastically changeable; one minute it's hot and sunny, the next, water is gushing from the sky as if God's pulled the chain. And after a week of Malaysian food, yup, I've got toilets on my mind. Kawasaki had flown 140 journalists from all over the world to test their new supersports bike, the ZX-9R, the new Ninja; even two Australians were invited - a polite one who didn't drink, and a normal one. Superbike World Champ Scott Russell and newly-signed works team-mate Tel-boy Rymer were there to keep the journalistic ego thoroughly deflated and show how fast a new Ninja can be ridden. Kawasaki was represented by the whole panel of the ZX-9R's designers headed by the legendary Ben Inamura, the man who has designed every big four-stroke kWack since his first project twenty years ago, the Zl. Out in pitlane stood two bikes, each poignantly representing a watershed in Kawasaki motorcycle history: the Zl (engine number 00000001), and an original GPZ900 Ninja. The ZX-9R was placed optimistically next to them. In a more relevant sense, the bikes which stand next to the ZX-9R are the Honda CBR900, Yamaha FZR1000 and Suzuki GSX-R1100. These are the bikes which the new ZX-9R is up against in the marketplace. I've only been home a couple of hours and someone has already called me to ask if it's 'better' than last year's market leader, the FireBlade. I couldn't answer in a word. Actually 1 couldn't answer at all. After about three sentences, the phone was left dangling and 1 was back on the bog, forming more loose opinions about Malaysian food. Next time I'm taking butties. The bike is the ZXR750's big brother, in image at least. The engine is more or less the same dimensions, the gearbox (but for the primary gear ratio) is the very same. The bikes share the same castings (but are machined differently). The ZX-9R is considerably more powerful - 139bhp at l(),5()()rpm at the crank with 71 ft-lb of torque at just 9()0()rpm. But simply sitting on the Ninja tells you this new bike is a different pot of noodles. I didn't need two days at a track to figure out that this is no proddie racer with lights. In fact it's written in between the lines of the spec sheet anyway. With a dry weight of 215kg, this bike is 30kg (661b) heavier than a Honda FireBlade.

I had five sessions, twenty minutes each on the ZX-9R around Shah Alam. I hated the track and I was indifferent about the bike. Ignoring the gearshift, the tire letting go at a whiff of throttle and soft rear suspension, I came away a little subdued.The Ninja was supremely stable, it turned in quickly, but was heavy to flick back; my hands and wrists ached at the effort. Ground clearance good. Handling overall, predictable and neutral. It was fast enough and picked up well. Was I having fun? No, not yet. It was all too much like hard work. I reserved my judgement of the bike until after the road riding - two days, a meet-the-natives thrash from Shah Alam, up to Port Dickson on the coast and back via Melaka to Kuala Lumpur.

On the Road to Mandalay

After half an hour on the road, I was beginning to wonder why we'd gone to the track at all. The men from Kawasaki had been saying it all along - 'city bike', 'street bike', 'road bike'; nobody ever mentioned a 'track bike'. Whose idea was it anyway? In retrospect, the ideal launch would've given us the first three days on the road and the last on the track. An air-conditioned track. The problems weighing so heavily on our minds at Shah Alam evaporated (along with most of my body fluids) on the road to Port Dickson. Or rather, it didn't show as badly. The gearbox up to 8000rpm would change down acceptably - bit noisy, bit clumsy. Neutral to first selection was still akin to dropping a bowling ball, but I didn't expect that to change with the scenery. I could live with it. The soft rear damping which held back the more throttle-happy chappies at the track, started to work in a more positive way, allowing the tire to stay in contact with the bumpy road. We were galloping at speeds which would've had a ZXR rider bucking clean out of the saddle. On full rebound adjustment, the rear was just about under control, allowing just a little pogo-ing, though it never even suggested a yaw or a weave. On British roads, the suspension will be fine, though fat blokes might need a stronger spring. I had no complaints about the tires' road performance. You can appreciate the motor's midrange spread on the road. It felt a little flat under 8000rpm on the track; on the road it just has huge power everywhere and country roads are no place for 8000rpm+ action. Loping along, riding the torque is what this bike's about. It's much more ZZ-R11 than ZXR7 in power delivery. And when the road opens up, hang on, because it's a short trip to the redline. An outstanding feature of the bike, only really appreciated in normal riding, is the relaxed and comfortable riding position. There's no Suzuki-style scrunched legs, your weight is well distributed, with a bias on to your wrists. It isn't as severe as the ZXR, nor are you hugged into the tank so closely. It's a good compromise and again underlines the bike's aim to be an 'all-rounder'. My complaint would be that it doesn't allow you to alter your riding position, which can be tiring. The fairing/screen is well-designed for a 5ft 11 in rider (me). The protection goes up to the base of my helmet at cruising speeds, which is about right to minimise buffeting and cover the body. On the subject of comfort, pillions have been given no consideration whatsoever. No grab rail, nothing. The finish of this £8100 motorcycle is good, as good as any other Japanese motorcycle. The equipment  is adequate: a temp gauge and a fuel gauge, nicely presented. The combination of a wide spread of power, neutral and obedient handling and balanced riding position adds up to one of the fastest roadbikes ever built. Not in itself - a ZZ-R1100 is quicker, I'm sure - but much more importantly, in what it allows you to do. You can use this bike. As a track bike, if you get the chance to a give it a go, you'll not keep with the FireBlades. But it won't scare you either. The third Kawasaki 900 in twenty years isn't about to make the splash its forebears did. Not with GSX-Rs and FZRs in the world already. But like those models, it's good enough to run and run.