Power was moderated via the Wet multi disc. 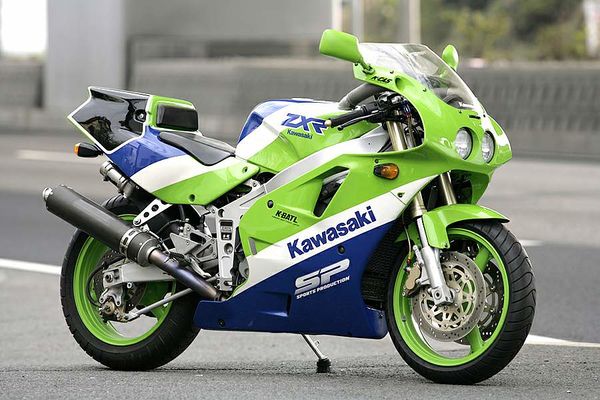 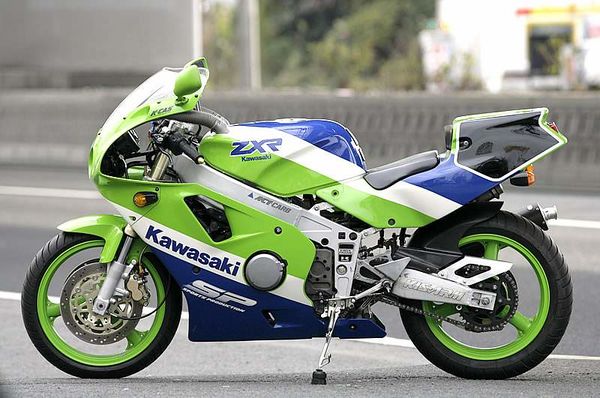 Kawasaki's ZXR400 is a scaled-down version of the larger ZXR750 sportsbike, in looks and intent. A race styled twin headlight fairing is mounted on a stiff aluminum frame, with race-spec suspension and a high-performance inline-four cylinder engine. The engine is dated, but strong for its size. Like all 400cc engines, the ZXR needs to be revved to produce its best power, but a keen rider will reap the benefits of careful gear selection. A slick six-speed gearbox helps, as does the ZXR's light clutch. Ridden on track, the ZXR400's light-weight, accurate chassis and race-developed brakes allow extreme cornering at high speeds. The 41mm (1.6in) front forks and the rear shock are adjustable for preload and damping. Performance Bike 1990 The howling begins just after the motor passes its rough patch in first gear on the way to its 14,500rpm redline. Crouched behind the fly-splattered screen, with a sci-fi Hoover pipe at either ear, I could hear the air-box resonating louder than the exhaust. All the way up through the gears the two sounds vied for supremacy  discordant wailing screams that never quite drown each other out. As the bike goes past the radar at 135mph anyone standing nearby can hear two bikes, not one. It's an addictive fix for the rider. Such are the delights of an airbox mounted in front of the fuel tank. When Kevin Raymond wrote about the ZXR last month he, not surprisingly, declared himself transported by it to a state of ecstasy. This is a fairly typical reaction to riding any super-snnrt 400: each one is amazing on its own, and from that point of view you could stop reading now and buy the one that's the nicest color, or has the cheapest price tag  which is the ZXR so you might as well start reading again anyway. It's only under the giant magnifying glass of a group test that a few bits of the ZXR are less It looks like a bargain because it is. than wonderful. Namely, the bit stopping the rear tire from rubbing against the mudguard: like its giant 750cc relative the ZXR400 has the hardest suspension in its class. Initially this was a bit of a problem for us because Kevin, who lives at the end of a bumpy 30 mile fen track, had praised the ZXR's stability. We found the bike stable all right but the choppy ride created approximately the same physical symptoms over a 100 mile ride as a light assault by a trainee mugger specialising in wrist, buttock and kidney. Kevin pointed out that the bike he rode last month, lent by Roy Pidcock Motorcycles, had far less rear preload. So if you want your ZXR to feel more compliant, get out the C spanner. The bike's beautiful steering response is, according to Kev, hardly affected. In the end we never bothered adjusting the preload on our bike because we were having so much fun riding it. Kawasaki UK have deliberately priced the ZXR cheap to make sure anyone contemplating handling sharpness and light weight of a 400 will go to a big K showroom first. The ZXR has both qualities in abundance. On a day's testing at Cadwell Park, everyone liked the Kawasaki because of its stability under braking (you can really pin it down hard and feel exactly how much more grip there is to go), clear feedback to the rider and pokey motor. The stiff suspension was paying off by allowing smoother braking, cornering and accelerating. On the road the ZXR is just a very, very quick-through-the-bends bike because it changes direction so fast and feels so safe doing so. It's tempting to climb all over the thing just for the hell of it but there's no real need  it tips in with the barest nudge of a footrest. It would be pretty difficult to hustle a heavier, longer wheelbase 750 or 1000 round a country lane at anything like the same rate, which makes the little ZXR the absolute ideal tool for anywhere with smooth tarmac, lots of corners and not many straights. Anyone living north of Derby or south of Paris who's thinking of buying a big bike should try one of these first. Cadwell was also the best place for the ZXR's motor. Slick, smooth gearchanges, 10,000rpm plus at all times, crisp throttle response. On the road this ideal is not always practical and although the Kawasaki has a strong torque curve it lacks instant zap. It's really got to be spinning to 8 or 10,000rpm before the action starts, but most riders liked this definite powerband. Round town the ZXR feels harsh and slightly vibey, needs a fair bit of clutch slip (a jerky process below 4,000rpm) and clunks going from first to second. The low, swept-back bars don't help either, though once outside a 30 limit there's no problem with the riding tion. Should you be unfortunate to find yourself on a motorway, the low screen will keep your speed down and the engine's desire to creep above 10,000rpm will keep it up. How you resolve this problem is entirely up to you. With such a big price differential between the ZXR and the FZR400, it's tempting to think there are some areas where you'd have to accept a lower standard. Apart from the choppy ride which spoils a basically excellent riding position and the lack of highly fashionable bump damping adjusters (so what?), there aren't any areas of compromise. Power, nan-, dling, braking and steering are all top line stuff. The ZXR also has an economical motor, the biggest tank range, the best mirrors, the most easily-removed bodywork, the best pillion seat (ha ha) and a high build quality. It looks like a bargain because it is.