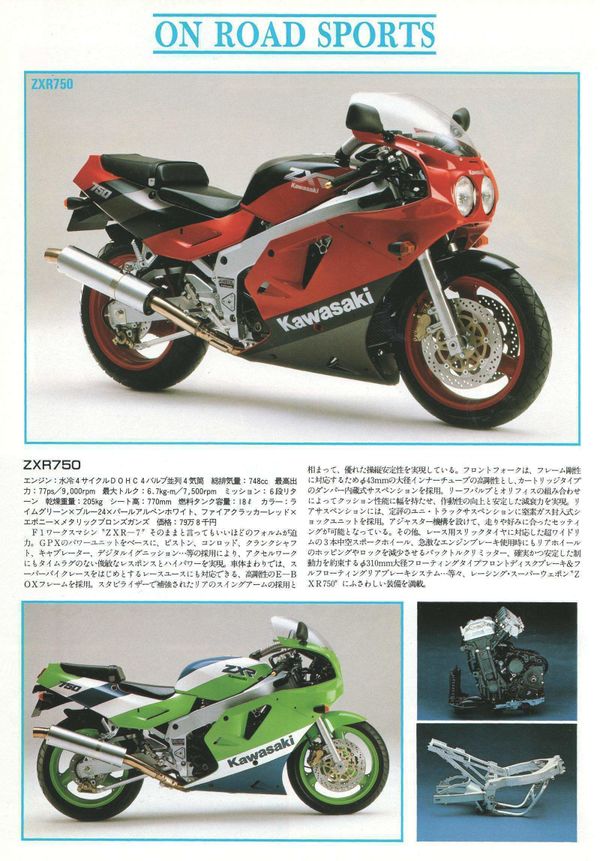 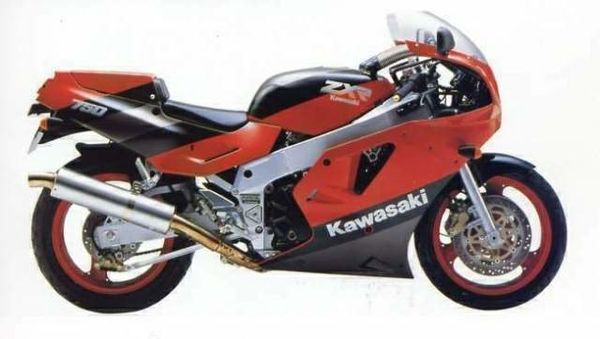 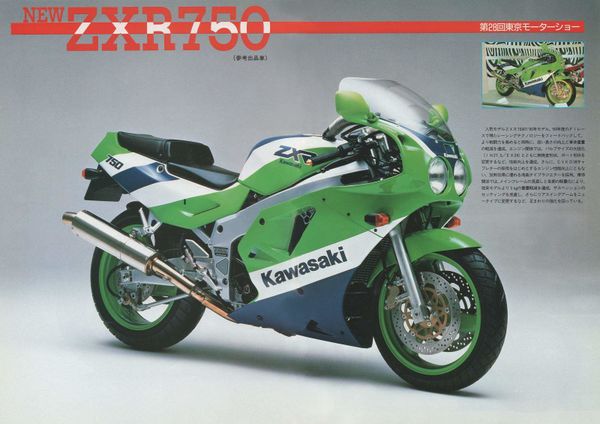 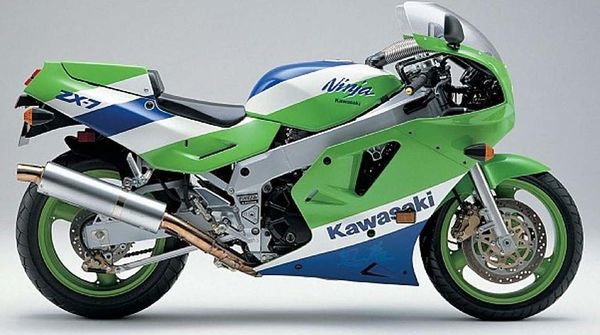 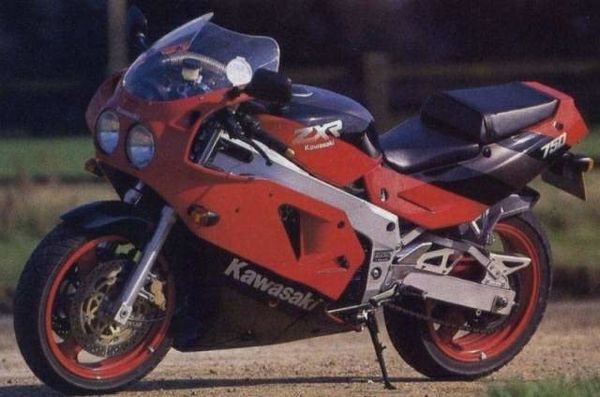 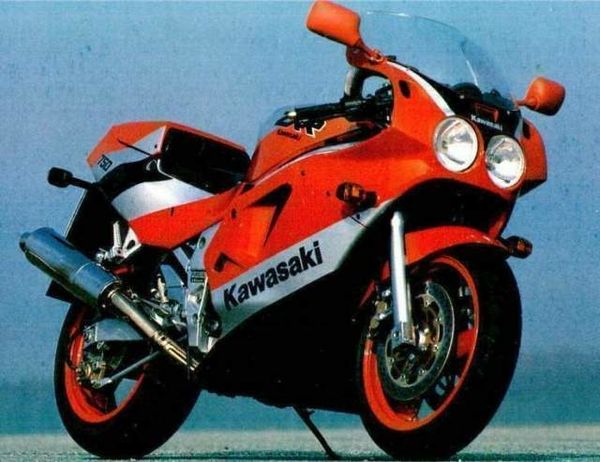 The ZXR750 is Kawasaki's entry-level World Superbike contender for the racer on a budget in 1989. It is also a very fine sports roadster. Instead of building expensive limited edition World Superbike specials like Honda's RC30 and Yamaha's OWOl, Kawasaki decided to mass manufacture a cheaper, more basic 750 that they op could sell to the ordinary motorcyclist. Race kits are available like for the track fiends but essentially the ZXR is a road bike that can be transformed into a racer, not the other way round.

Limited edition specials have never interested Kawasaki and their decision to mass produce the ZXR at reasonable cost led to a refreshing design brief. Instead of assembling an expensive, hugely powerful engine, they only mildly tuned their GPX750 road bike engine. They then installed it in a trick, all new sports chassis with styling that made it look like the factory endurance racer. That way racers who wanted tuned engines could spend money on the factory racekits while the road rider got a proven motor in a new, sharp handling package.

That the ZXR750 only produced 108hp compared to the 106hp of the much older and traditionally styled GPX750 proved a disappointment to some people. It shouldn't have done because the ZXR's cycle parts allow all of the 108hp to be enjoyed to the hilt. The ZXR is one of the few modern 750s that can be ridden to its maximum in comparative safety. Even without blinding horsepower it provides maximum riding thrills. The suspension, although multi-adjustable, is sports stiff and this, combined with the cramped and spartan riding position, can be punishing on anything but dead smooth roads. The rider is stretched over the high and wide tank to the clip-on handlebars. The seat is hard and any bumps initially absorbed by the harsh springing tend to be transmitted through to the rider's chest and crotch.

That aside, once the suspension and ride height have been set up to suit the individual and the terrain, the ZXR is very surefooted, stable and predictable. The steering is definitely not quick but its neutral to heavy action encourages hanging-off with the rider transferring his weight around the turns like a real racer. The slightly top heavy feel disappears at speed. Above 100mph the enforced riding position starts working for the rider, the wind lifting the pressure off the wrists and the handling becoming increasingly lively and responsive. The engine was extensively revised in 1990 and features a lot of parts previously only available in the racekit. Fed by big, semi-downdraft carbs, the current model wears a new cylinder head, larger valves and smaller, lighter pistons. The factory's engine tuners have extended both the powerband

and top end horsepower, though it remains an engine that has to be revved hard to give of its best. Equipped with typically strong Kawasaki brakes and excellently finished with quality paint and snug-fitting bodywork, the ZXR is an interesting variation of the race-replica theme offering a proven roadster engine in a race-orientated chassis. Strangely, the kitted versions run by privateers in World Superbike races have struggled against the much more expensive RC30s, OWOls and Ducati 851s. The factory have a moderately successful Formula-One spec version called the ZX7 Stinger but that's a hand-built, mega-expensive raceshop creation bearing little resemblance to the mass produced bike.

Ride Magazine Review BECAUSE Kawasaki got most of it right first time. By modern standards a ZXR's 205kg and 92 back-wheel horsepower are more road than race but that's fine by us. Or it would be if you could still buy a new one. By this age (nine) most sports bikes are knackered. Worn bearings, suspension and neglected brakes turn once taut sports weapons into plodders. The ZXR750 has always been a hairy motorbike. Launched in 1989 as a poor-man's Honda RC30, its claimed 107bhp, alloy beam frame and endurance racer styling put it top of most riders' Christmas list. Who cared if the 'Hoover tubing' air intakes didn't go anywhere or improve performance, or the

suspension threw you out of the seat when you ran over a small leaf? The ZXR looked the business and had all the right gizmos for a late-80s sports bike. Kawasaki sold boatloads. You don't see many in showrooms but there are plenty still around - normally in the hands of devoted owners. Actually, ZXR owners are fanatics and those with early H-models are the worst. The color-matched seat, wheels and master cylinder covers on this one aren't the work of a one-off loony, there are dozens like this. Kar rode it back from the dealer. "It wasn't as uncomfortable as expected," he said, "for the first few hundred yards at least. Then I hit a bump, then another, and another. I don't remember the journey there being rough." Unlike most biker legends, the ZXR suspension horrors are true. On smooth roads you never think about it, but on bumpy stuff it's always on your mind. Following Tom on the GSX-R, the Kawasaki's back wheel spent more time airborne than on the ground. Meanwhile my battered knackers retreated upstairs in a desperate act of self-preservation. Tom normally likes bikes that put up a fight, but not this one. "On decent roads it steers better than the Suzuki, dropping into corners with a nudge on the bars. Thing is, where I live the roads are bumpy and I want to have children one day. A ZXR would finish me off."

Adrian reckoned it felt more like an overweight 600 than a sports 750. "The riding position is much more accommodating than the Suzuki's and would be comfy if the suspension let you stay in the saddle long enough. You sit in, rather than on, the bike because the footpegs are lower," he says. After all the aggressive styling and violent chassis behaviour the engine's a bit of a let down: smooth and free-revving but not as exciting as a 750 should be. Most of the power lives above 8000rpm but there's no big kick like the Suzuki, making the ZXR feel tame in comparison. Not being fast by Yamaha YZF-R1 standards isn't always a handicap for a road bike. After all, 150mph isn't exactly slow.  Most ZXRs are bought by riders climbing the performance ladder - for them the Kawasaki still feels suitably sporty. And with the suspension sorted, it has the added benefit of rock steady stability. Early ZXR build quality was superb and it takes serious abuse to kill one. Our bike had some rough edges but I've seen a lot of newer bikes in worse nick. Which is why they've always been strong sellers. Not long ago a nice ZXR750H1 cost much more than the equivalent GSX-R750. Things have evened up recently and prices are falling, but for now you'll still need at ^, least three grand for a nice one.