Power was moderated via the Wet, multi-disc with mechanical drive Cassette style.

It came with a 120/65 ZR17 front tire and a 180/55 ZR17 rear tire. Stopping was achieved via 2x 320mm floating discs 4 piston calipers in the front and a Single 220mm disc 2 piston caliper in the rear. The front suspension was a 43mm Marzocchi "UPSIDE DOWN" telescopic hydraulic fork with rebound-compression damping and spring preload external, and separate adjustment while the rear was equipped with a Progressive Sachs, single shock absorber with rebound and compression damping and spring preload adjustment Single sided swing arm material Aluminum alloy. The F3800 Ago was fitted with a 16.6 Liters / 4.3 US gal fuel tank. The bike weighed just 173 Kg / 381.4 lbs. The wheelbase was 1380 mm / 54.3 in long. 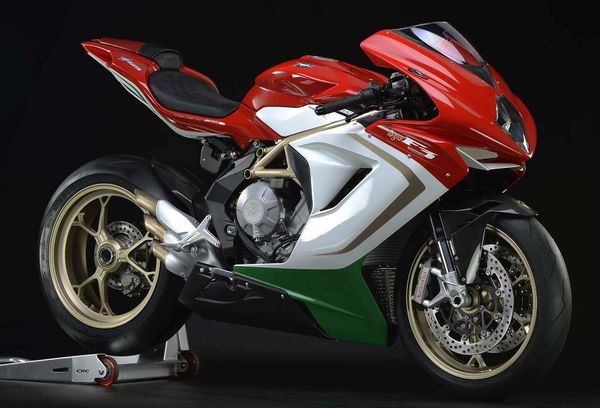 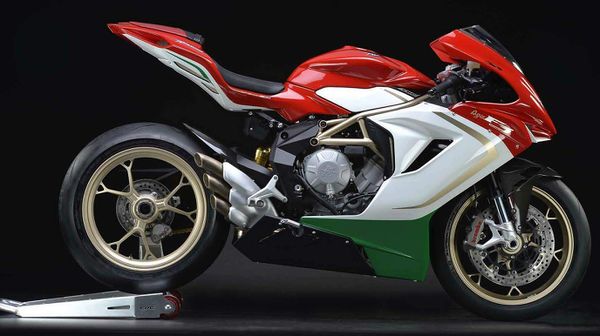 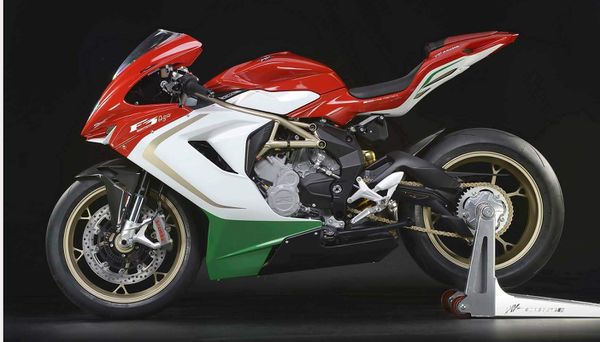 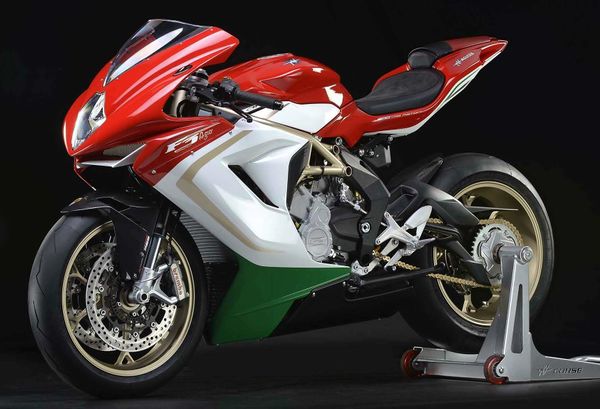 The MV Agusta F3 800 Ago, a special edition motorcycle to celebrate one of the greatest motorcycle racers of all time, Giacomo Agostini. On hand for the unveiling of his special edition machine, Mr. Agostini signed the very first model, which sports his signature Tricolore and gold racing livery, and is fitted with copious carbon fiber bits. No mechanical work has been done to the MV Agusta F3 800,

The exhilaration of a 1000cc Superbike with the handling of a 600 Supersport. The torque of a v-twin and the rev limit of a four-cylinder.

The MV Agusta F3 800 is the new performance frontier, the avantgarde three-cylinder motorcycle proudly Made in Italy.

More power, more torque, more adrenaline. The result is a motorcycle with exceptional handling, an advanced electronics package and the new 800cc engine with 148 HP and 88 Nm of torque. Coupled with the incredibly low weight of 173 Kg, it offers a power to weight ratio that allows it to do battle directly with litre class Sportbikes.

The MV Agusta F3 675 redefined the concept of middleweight Supersport bikes with the perfect balance between engine and chassis. The engine is the epitome of Italian technology and the chassis offers class leading performance both on the road as well as at the track. The MV Agusta F3 800 pushes the boundaries of mid-range Supersport to Superbike replica level, revolutionising the sector with a bike that represents an undisputed technological and performance milestone.

ENGINE The bore diameter remains unaltered at 79.0 mm; the stroke has been increased from 45.9 mm to 54.3 mm resulting in a displacement increase from 675cc to 798 cc. The power output increases an incredible value of 148 HP at 13,000 rpm coupled with a peak torque value of 88 Nm at 10,600 rpm. The rev limiter has been set to intervene at 13,500 rpm. The timing system is double overhead cam with four titanium valves per cylinder to benefit the high RPM performance. The fuel injectors are also new which guarantee a higher flow rate and increased power compared to those of the F3 675.

The three-cylinder engine is the pinnacle of motorcycle engineering: it's extremely light and compact (weighing just 52 kg) and uses a âclosed-deckâ shell mold cast crankcase with integrated cylinders. The water and oil circuits are integrated into the actual crankcase castings and their respective pumps are located inside the engine with obvious advantages in terms of styling as well as compactness. Among the innovations on this three-cylinder MV Agusta F3 800 is the counter-rotating crankshaft, a technical solution that prior to the F3 675 was only available on MotoGP motorcycles. The objective? To reduce the rotational inertia effect during quick directional changes and to improve the vehicle balance with the resulting ease of handling of the F3.

The considerably higher performance is reflected, for the same bike mass, in an increased power-to-weight ratio (1.17 kg/HP) compared to the F3 675. And that's not all; the response to acceleration under all conditions as well as the smoothness of the power delivery at mid range rpm are remarkably improved. These two crucial factors immensely increase the pleasure of riding on the road and decreasing lap times on the track. The 148 HP power output translates into a top speed of around 269 km/h coupled with a modification to the final drive ratio which has been increased from 16/43 to 17/41. Lastly, the mechanical slipper clutch system designed and developed by MV Agusta allows the best performance to be achieved even under hard braking. ELECTRONICS The three-cylinder MV Agusta project has brought the most advanced electronics ever seen to the middleweight category. The MVICS (Motor & Vehicle Integrated Control System) platform combines total electronic control of the throttle and throttle body with traction control. The Full Ride By Wire is to all intents and purposes the technological basis of the MVICS platform: the system makes it possible for the ideal throttle body aperture to be defined at any moment in time, so it is not dependent on the angular rotation of the twist grip. There are in fact no mechanical constraints between throttle and butterfly: the injection mapping and ignition are what defines the optimum fuel-air mix to give the best performance at all times and under all load conditions.

The MVICS offers a multimap approach, with three maps devised by MV Agusta technicians and one that can be fully customised by the rider, who mixes the parameters available to obtain the closest solution to his needs.

Traction control is by now a vital pre-requisite: it uses the same operating criteria as the much admired system employed on the F3 675, with 8 different levels that are easily selected using the handlebar controls and the compact, fully digital, dashboard. CHASSIS The excellent handling of the F3 675 are present on the MV Agusta F3 800. Beginning with the wheelbase of a mere 1,380 mm which is a record achievement that acts as the basis of the exceptional ease of handling of this revolutionary three-cylinder.

The frame is the result of a clever combination of a main structure in ALS tubular steel and a middle section comprised of a pair of cast aluminum side plates, as well as the extended swingarm (576.5 mm) which has been designed to provide maximum traction.

The sophisticated Marzocchi front forks with 43 mm diameter legs and 125 mm of stroke offers adjustable spring preload and both compression as well as rebound adjustment. The fork and shock valving is dedicated in order to take full advantage of the higher performance 800cc engine.

The Sachs mono-shock absorber with a travel of 123 mm has a separate piggyback nitrogen reservoir and is fully adjustable for spring preload, compression and rebound. The brake system has been upgraded as well utilizing Brembo monobloc (M4.34a) front calipers to guarantee unrivaled braking performance even under the most severe conditions, especially at the track. There is no change in the diameter of the two front discs (320 mm) and the rear brake system remains a two-piston caliper mated to a single 220 mm diameter disc. The tires fitted as standard are Pirelli Diablo Rosso Corsa; 120/70-ZR17 on the front and 180/55-ZR17 rear. COLORS AND PRICES The new F3 800 is available in 3 color combinations: â¢ Pearl white/black â¢ Red/silver â¢ Matt metallic black

(Every country could have a price variation due to local import duties and taxes.)