Power was moderated via the Single plate with integrated flexible couplings.

It came with a 120/70 ZR17 front tire and a 180/55 ZR17 rear tire. Stopping was achieved via 2x 320mm discs 4 piston caliper in the front and a Single 282mm disc 2 piston caliper in the rear. The front suspension was a Telescopic hydraulic fork with Ø 45 mm and TIN surface treatment, preload adjustable while the rear was equipped with a Single arm suspension with progressive linkage, rear shock absorber adjustable in rebound and pre-load (hydraulic). The 1200 Sport 8V was fitted with a 23 Liters / 6.0 US gal fuel tank. The bike weighed just 229 kg / 504.9 albs. The wheelbase was 1485 mm / 58.5 in long. 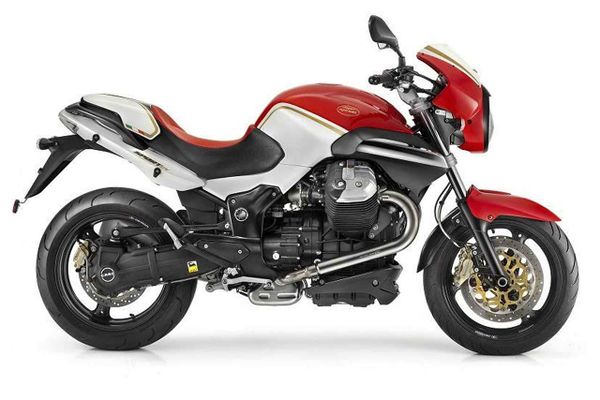 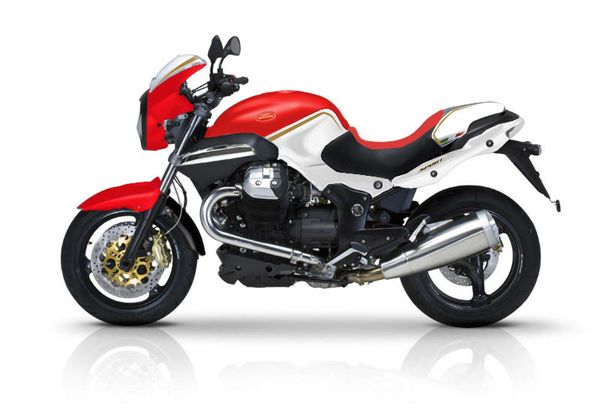 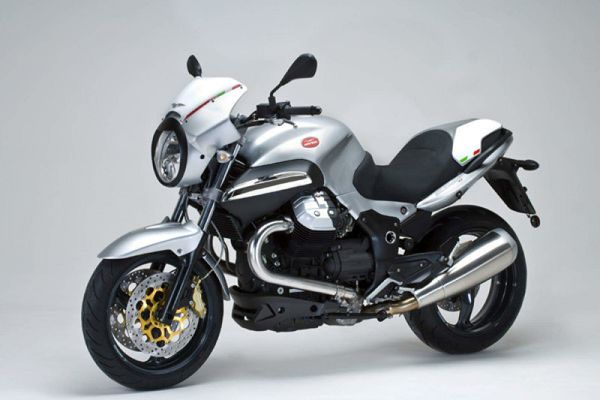 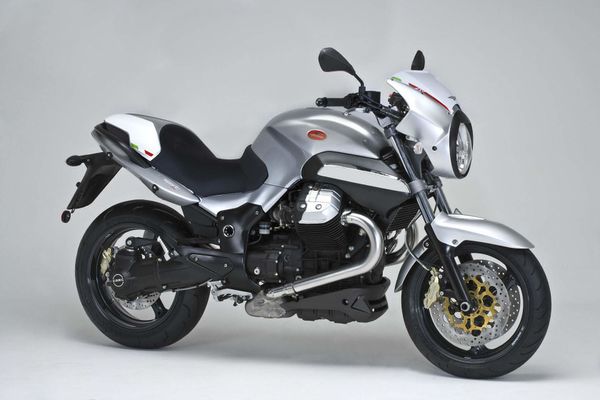 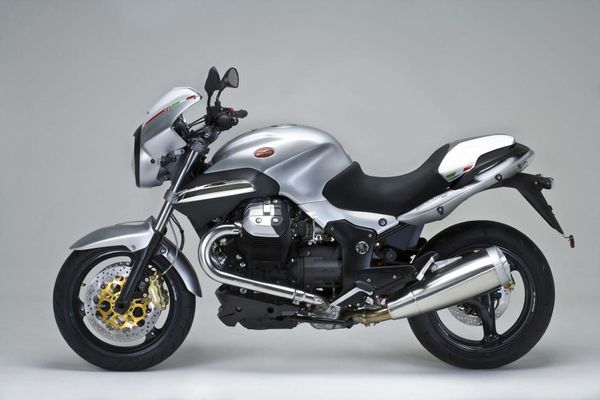 The look we already know but the 105 CV of grunt from the Quattrovalvole engine is all new. The power delivery is silky smooth and, on the open road, the bikes true sports character shines along with numerous technical innovations and a new sense of style. The new over and under exhaust system communicates the innate power and innovation of the engine as does the new triangular base of the silencer and the new clear rear lamp cluster. Better performance ensures that the new 1200 SPORT 4V will become an icon for riders seeking real sports performance, not just show. Good taste is assured by the style that gives this Moto Guzzi its character. This style can be seen in the screen and the saddle that house racing number plates like competition models, it can be seen in the white-faced instruments, in the Brembo Gold Series brakes and in the set-back aluminum footpegs.

Although the new Moto Guzzi 1200 SPORT 4V has a decidedly sports type set-up, it is also an excellent tourer with every detail well designed for the rider and pillion passenger to travel in the utmost comfort. The saddle is well padded and offers great support, weight distribution is ideal and with a low centre of gravity, the 1200 SPORT 4 V can easily change direction very quickly on those twisty roads that offer the rider such satisfaction.

The superb handling is due to the exceptional rigidity of the twin cradle steel frame, the forks and the fully adjustable shock absorber that guarantee both comfort and excellent road holding. Those of you that go touring will really appreciate the protection offered by the windscreen and how this sports bike so easily becomes a real Grand Tourer complete with heated hand grips, panniers, top box and satellite navigation system.

No matter the speed, the brakes provide very wide safety margins and consist of twin 320 mm discs with radial mounted four-piston calipers at the front and a single 298 mm disc at the rear. The brake sizes are the same on the ABS version.

In classic black or elegant titanium grey, the 1200 Sport 4V also stands out with its subtle green, white and red stripe that celebrates the bikes Italian heritage.

Review We're not used to Guzzi coming up with new models, so when the long established Italian firm unveils something fresh it's big news. But one development that's slipped under the radar has been its significantly reworked for 2009 1200 Sport.

The main difference, aside from some minor detail changes between this and the current model is the 1151cc V-Twin motor, which now has a four-valve head instead of two, which gives the 1200 Sport 4V a bit of extra shove. This is the engine that's also used in Moto Guzzi's Stelvio adventure bike and the Griso 8V cruiser (although why that's called an 8V and not a 4V is not clear).

With its extra valves, revised fuel-injection mapping and new exhaust, which features a new cat and a triangular-section end can, power is taken up 10 hp from 95 hp to 105 hp. Maximum torque is up too, from 74 lb-ft to 77 lb-ft, but it's produced 750rpm higher up the tacho.

Accelerate hard and the best thing about the Guzzi is the sound of thunder from the huge V-Twin engine. It's amplified beautifully by the acoustics of one of the many tunnels that litter our route near the factory on the banks of Lake Como; as the revs build the airbox growls and the exhaust pulses a deep, bass-laden soundtrack. This is music you'll never grow bored of.

Initial acceleration is urgent, but then the Guzzi hits a bit of a flat spot in the midrange until it gets going again above 5000rpm. As the tunnel lights flash by ever faster the Guzzi's speed is impressive and the whole sensation of acceleration and sound is very reminiscent of an early Ducati 916.

The new valve system for the 1200 Sport delivers a claimed 10 horsepower boost, with an extra 3 lb-ft of torque. Compared to the two-valve Sport 1200, the 4V offers much more get up and go, if you're willing to work the engine hard. But for those who prefer more grunt and fewer revs, the two-valver is still the one to go for and has much more going on below 5000rpm. You'll still find the two-valve 1200 Sport in dealers, so if you want more grunt from your Guzzi, hurry up while stocks last, as they say.

The Guzzi hides its weight well when moving - and it has a lot to hide as it squashes the scales at a hefty 240kg (529 lbs). Flicking the 1200 Sport 4V from side to the takes minimal effort and is helped along by the leverage from its revised wide, upright bars, which wouldn't look out of place on something like a KTM Super Duke or Aprilia Tuono.

The tubular steel chassis and adjustable front and rear suspension give good feedback through the long sweeping bends and offer up plenty of stability. You're rarely troubled by the existence of the maintenance-free shaft drive system, unless you're pushing hard, at which point the Guzzi with pitch and weave on and off the throttle.

Brembo's Gold Series brakes give an impressive amount of bite and feel, especially when you consider the bike's weight. In an attempt to offset the cost of the more expensive engine the wavy brake discs of the two-valve model are replaced by basic round ones. It may have lost some bling in this department, but the 4V is no worse for it from a performance point of view.

Riding position of the Moto Guzzi 1200 Sport is roomy and comfortable, although this tester complained of a long reach to the bars. Despite being a heavy bike, riding in heavy rain on roads so glassy you could have a shave in them, I'm actually still enjoying myself. What separates Moto Guzzi's idea of a sportbike from most others is that 'sport' in Guzzi speak doesn't mean a zillion horsepower and riding around at 180mph on hard suspension with your feet around your ears. Their idea of sport is altogether more gentile and well-rounded. Think of Guzzis as the two-wheeled equivalent of the cool and classy Maserati.

The 1200 Sport's ample proportions make it a very roomy and comfortable place to be. One of the biggest criticisms leveled at the two-valve Sport was the bar position, there's too much of a stretch to reach them. New bars for the 4V see them moved backed towards the rider; it's better but they're still a bit too far away for them to be completely comfortable.

The seat is wide, long and plush for rider and pillion alike and is easily comfortable enough to go touring on. Guzzi will sell you the same panniers and top box etc as you'll find on the Stelvio and Norge, heated grips and there's a massive 23-liter (6-gallon) fuel tank for big mileages too. Lazy steering geometry means that straight-line motorway stability is epic, even on typical unbroken Italian surfaces.

The throttle response is perfect, so navigating this big V-Twin is simple and there's plenty of grip from the brilliant Metzeler Sportec M3 tires. Having the more 'top-endy' four-valve motor to use in our wet conditions is a blessing too, as there's less low-down grunt to unhook the rear tire when you get on the gas.

Guzzi seem to be doing a lot right nowadays, and incredibly, the UK is the firm's the fourth-biggest market (behind Italy, Germany and the US). We seem to love Guzzis for their quirky Italian-ness and they seem to suit our roads, too. What better bike to cruise out on a Sunday morning blast on heavily-policed, bumpy roads than a swift, supple, great-sounding Italian sportsbike like the Moto Guzzi 1200 Sport 4V? It's a superb, characterful all-round, soulful motorcycle with a sporty twist. Source