Power was moderated via the Twin plate, dry type.

It came with a 110/90 V18 front tire and a 130/90 V18 rear tire. Stopping was achieved via 2x 300mm discs 2 Brembo piston calipers in the front and a Single 270mm disc Brembo 2 piston calipers in the rear. The front suspension was a Telescopic with preload adjustment while the rear was equipped with a Dual Koni shocks 5-way preload. The California III injection was fitted with a 25 Liters / 6.6 US gal fuel tank. The bike weighed just 250 kg / 550 lbs. 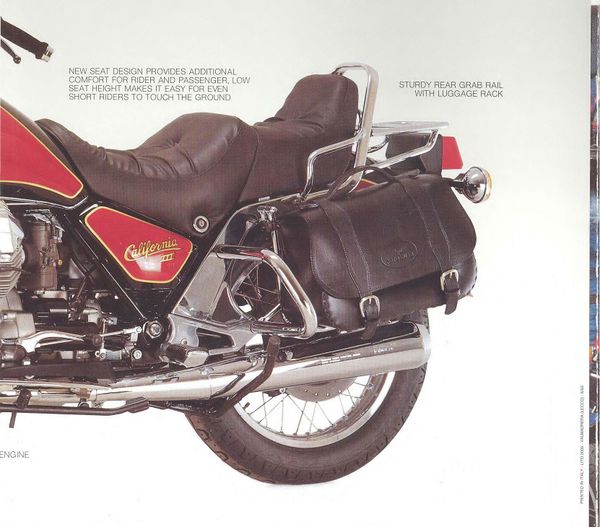 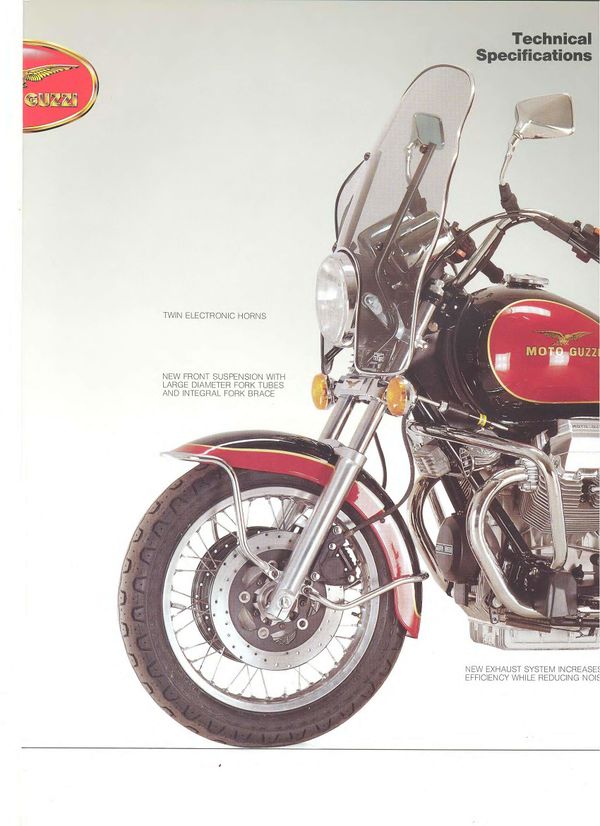 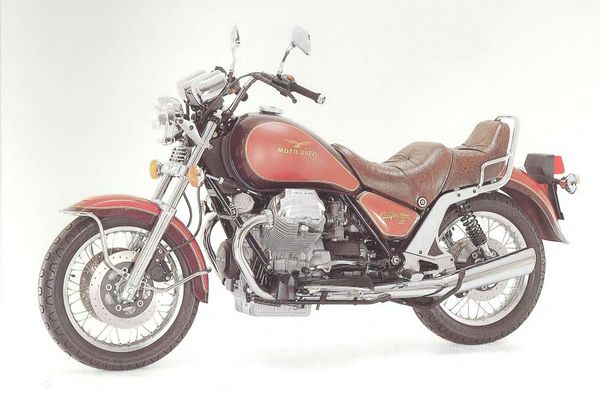 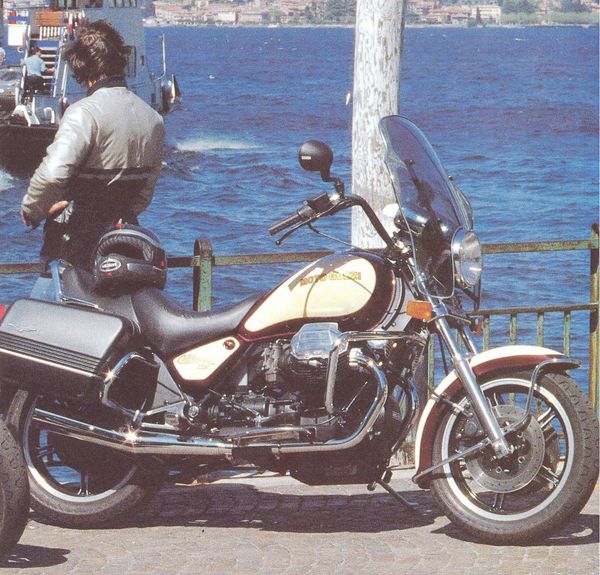 Though not as well known in America as that other Italian motorcycle maker, Ducati, Moto Guzzi has been a small but solid fixture in this market for about three decades, and has been making motorcycles for 76 years. Though the numbers have always been small, its distinctive V-twins--which are placed across the frames with the air-cooled cylinders jutting out into the wind stream on either side of the bike--have become familiar sights simply because they are so durable. The 90-degree V-twin design, which has always been paired with shaft final drive---a natural because it plugs right in using this engine configuration with no extra gear pairs to change directions as on a tandem V-twin---and has been applied to various applications including police bikes, tourers, the LeMans and Sport sportbikes, and, of course, the California-series Cruisers. Guzzis are sometimes called "Italian BMWs" because of their similar layout (think of a Guzzi engine as an older pushrod BMW with its cylinders folded up to a 90-degree V) and concern for practical virtues like dependability, comfort and ease of maintenance. While other Italian motorcycles are sometimes thought of as fun but flighty, Guzzis have a reputation as fun and functional. This character has remained even as motorcycling has trended toward greater specialization and despite ownership changes at Moto Guzzi. Though the machines have evolved and grown--Moto Guzzi twins displace 1064cc these days---the qualities that distinguished them as survived. America, 613 W. Lillington St., Angier, NC 27501, 919/639-3180 or 800/USA-MOTO) to ride to the Honda Hoot at the other end of the state. Our test unit was decked out in 75th-anniversary livery, but is otherwise a standard California, which now means that it has Weber fuel injection instead of carburetors. There is a fast-idle ("choke") lever next to the left handlebar grip, but we couldn't tell you if it does anything. The Guzzi always started promptly (providing you retracted the sidestand, which prevents the starter button from doing anything) and settled immediately into a smooth idle. The only difference between a cold engine and a warm one was that when cold it bogged slightly the first time you applied any load, requiring a bit more throttle to compensate. The exhaust has a crisp, deep, distinctly Italian note and cadence. The California has the typical large flywheels of Guzzis, which means that a clumsy clutch hand or sloppy job of matching engine and transmission speed gets you a lurch. We normally dislike heavy flywheels for this reason, but the Guzzi's smooth clutch and response to throttle made it easy to adapt quickly and within an hour we forgot all about the heft of the flywheels. Because of the crankshaft orientation, torque reaction cants the machine slightly to the side when you rev the engine. This has no effect on handling, but it's another quirk in the character of the bike. The engine layout also means that longer-legged riders might bump the cylinder heads, particularly the left one, which is set slightly farther back than the right.