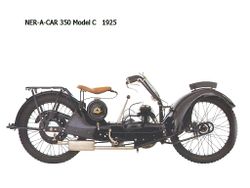 The NER-A-CAR has quite a clever name, being founded by Carl Neracher it was a symbol of his name, and of his dream to build a motorcycle that was as near a car as possible. The long and low NER-A-CAR was built first in Syracuse, New York and then later in Britain. It initially came with a 221cc two-stroke engine and later with a 350cc four-stroke single. Although it was a very practical bike, being very stable due to its innovative hub-centre steering, the Ner-a-Car was not commercially viable. It began production in 1921 at the astounding rate (likely not sustained) of 150 per day, and ended production in 1926.

The perceived need for an "every-mans" motorcycle and its consequent design is a theme that can be traced through the first six decades of motorcycle development resulting in numerous intriguing machines ranging from Neracar as offered to the Vespa via the Velocette LE and arguably the machine that finally addressed the requirement, the Honda C50. Conceived by J Neracher, the radical Neracar entered production at the Syracuse, New York factory during 1920. Clearly influenced by contemporary automotive design the new motorcycle was powered by a 211cc two stroke single cylinder engine, which utilised friction drive. The drive-train was mounted in a very low position between two side rails which at the front carried a pair of sprung and pivoted arms and at the rear formed the forks for the rear wheel. Steering was facilitated by a hub centre system, which according to proponents of the design endowed the machine with exceptional handling and stability, although rumours to the contrary persist. The majority of the engine and transmission were covered with steel panels, only the cylinder and head being visible, which combined with an extensive front mudguard to help keep the rider clean. A sprung saddle mounted in line with the top of the rear wheel and foot-boards contributed further to rider comfort. Production continued at the Syracuse plant until 1923 and was then taken up by Sheffield Simplex in the United Kingdom until 1927. A bucket seat option endowing the machine with even "nearer to a car" qualities was offered between 1925 and 1926. British built examples continued initially to use the two stroke engine, although this was subsequently replaced by a four stroke 347cc Blackburne side valve single accompanied by chain final drive instead of the friction system previously employed. In this form the machine achieved a degree of success, appealing particularly to professional women in rural areas such as midwives as well as the clergy.