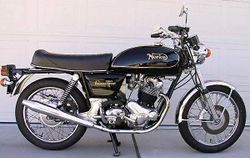 The Norton Commando was introduced in 1967 at the Earls Court Show. The first production machines completed in April 1968 had bending frame problems, removed with the introduction of a new frame in January 1969. The original model, called the 'Fastback' was joined by the production racer 'S Type' which had a high level left-side exhaust and a 2.5 gallon petrol tank.

Production of the machine was initially complex and located across different parts of England, with the engines produced in Wolverhampton, frames in Manchester, while components and final assembly was at Burrage Grove, Plumstead. In late 1968 Plumstead works was subject to a Greater London Council compulsory purchase order, and closed in July 1969. With assistance of a Government subsidy, the assembly line was moved to North Way, Andover; with the Test Department in an aircraft hangar on Thruxton Airfield. Frame manufacturing was transferred to Wolverhampton, where a second production line produced about 80 complete machines each week. Components and complete engines and gearboxes were also shipped overnight, from Wolverhampton to the Andover assembly line.

The S version was a production racer, featuring an OHV tuned engine, front disk brake and was finished in bright yellow - known as the Yellow Peril. In March to June 1970 the updated S called the Roadster had the 750cc OHV engine, low-level exhaust, upward angled silencers and reverse cones. September 1970 saw the introduction of the classic Fastback Mk2, which had alloy levers with modified stands and chain guards. The 'Street Scrambler' and the 'Hi Rider' were launched in May 1971, with the 'Fastback Long Range' with increased petrol tank capacity from July 1971.

The 'Combat' engine was introduced in January 1972 saw the appearance of the 'Mk4 Fastback', updated 'Roadster' and the '750 Interstate'. The 'Combat' delivered 65 bhp at 6500 rpm with a 10 to 1 compression ratio, but the stressed 750cc twin proved extremely unreliable, with main bearing failures and broken pistons common.

The 'Combat' engine combined with quality control problems gave the company a bad reputation, which was highly covered in the press. By the middle of 1972 BSA Triumph group were in serious financial trouble. The UK Government decided to bail the company out with a financial rescue package, providing it would agree to merge with Norton Villiers. Norton Villiers Triumph was duly formed and the new company got off to a shaky start.

The engine was a oil & air cooled twin, four-stroke. A 73.0mm bore x 89.0mm stroke result in a displacement of just 745.0 cubic centimeters. Fuel was supplied via a overhead valves (ohv).

The bike has a 4-speed transmission. Power was moderated via the Wet multi-plate. 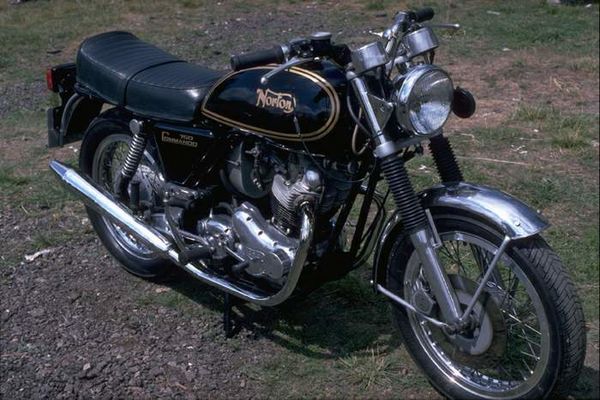 Norton introduces new Commando 750 Interstate style, a long distance strider with the speed of a sprinter. This bike has a 22.7 liters tank, full size buddt seat optional styled to match saddlebags, luggage rack and fairing. The big news for the 1972 Norton Commando line was the addition of a new, highly-tuned version of the 750 twin, called the Combat engine