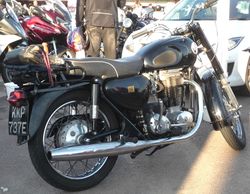 The last ES2 was introduced in late 1964. A Matchless-based machine with Norton badges, it was produced for two years before final discontinuation, coincident with the commercial failure of the AMC Group.[1][2]

The slow but immensely likeable Featherbed-framed 350 Model 50 and 500 ES2 Norton ohv singles were dropped and in their place appeared the Model 50 MkII and ES2 MkII, or, with Norton badges hastily tacked on the side, the Matchless G3 and G80. They failed to fool anyone, let alone the buying public. In 1966 the heavyweight singles were all but a memory...