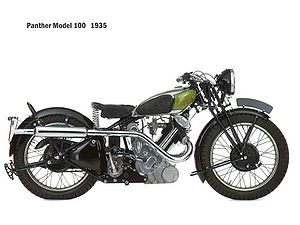 Phelon and Moore was established during 1904 in Cleckheaton, Yorkshire and from the outset produced machines with a sloped cylinder that replaced the front frame downtube built under a patent filed by Joah Phelon in 1901 . During the First World War the company supplied a large number of machines to the services, particularly the Royal Flying Corp and usually with a sidecar attached, a role that was to become synonymous with the marque. During the 1920's the company introduced a model named the Panther, a title that was quickly adopted as a brand-name for all their products.

As the 1930's opened the firm had a modern, balanced product line. The 250 Panthette vee twin had been replaced by a range of Villiers powered lightweights displacing between 147cc and 247cc which, thanks to their low cost and sound engineering sold well in a difficult market. These were complimented by three large capacity singles, the Model 50 displacing 499cc and the 594cc Model 60 and 85 Redwing. These handsome machines all featured the sloping cylinder, and a twin port head with the exhausts terminating in a pair lozenge shaped silencers equipped with fishtail outlets which combined to give the machines a rakish air. The modern styling was enhanced by a nicely profiled saddle tank and the dry sump lubrication system ensured that there was no unnecessary clutter spoiling the motorcycles lines under the saddle. The over head valve engine transmitted its power via a three speed gearbox and chain final drive.