A petcock is a small valve used to control the flow of liquid or gas. 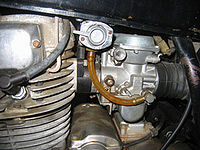 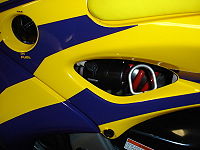 Petcock integrated into Sportbike fairing on a Honda CBR600F3

Most older motorcycles have a fuel petcock valve mounted on or nearby the fuel tank to control the supply of gasoline.

Common petcocks have the following positions on them:

The petcock typically has three positions: on, off, and reserve. The reserve position accesses the bottom portion of the fuel tank. Its functionality is especially useful on older or more basic motorcycles, which may not possess a fuel gauge. Many motorcycles now have an automatic, vacuum operated, petcock, with on and reserve as well as a prime position, which is used if the fuel level is run so low that the engine cannot be started.

When operating a motorcycle the fuel management process often proceeds as follows: when regarding vintage motorcycles, the petcock is set to the off position when the motorcycle is not being operated. This is to eliminate fuel overflow and leakage via the carburetor. Before starting the engine the petcock is turned to the on position in order to provide gasoline to the fuel delivery system.

While operating the engine there will reach a point at which fuel consumption causes the level of gasoline in the fuel tank to fall below that which can be accessed by the petcock in the on position. At that time continued operation of the engine can be maintained. This operation is achieved by accessing the remaining fuel in the fuel tank via rotating the valve in the petcock to the reserve position.

In the United Kingdom it is known as a petrol tap. Triumph Bonnevilles have two petrol taps, one on each side of the tank.