Power was moderated via the Automatic centrifugal dry.

It came with a 2x 120/70 -13 front tire and a 140/70 -14 rear tire. Stopping was achieved via 2x 258mm stainless steel discs, One disc brake per wheel, c 2 piston caliper in the front and a Single 240mm disc in the rear. The front suspension was a Articulated quadrilateral consisting of four aluminum arms sustaining two steering tubes, and leading arm suspension geometry with offset wheel axle. Stroke: 95mm. Electro-hydraulic suspension locking system. while the rear was equipped with a Dual effect hydraulic shock absorbers and adjustable spring pre-load.. The MP3500 HPE Business was fitted with a 12 Liters / 3.2 US gal fuel tank. The bike weighed just 261 kg / 577 lbs. The wheelbase was 1549 mm / 61.0 in long. 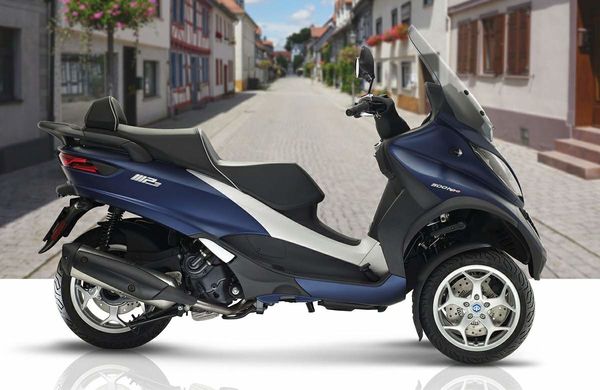 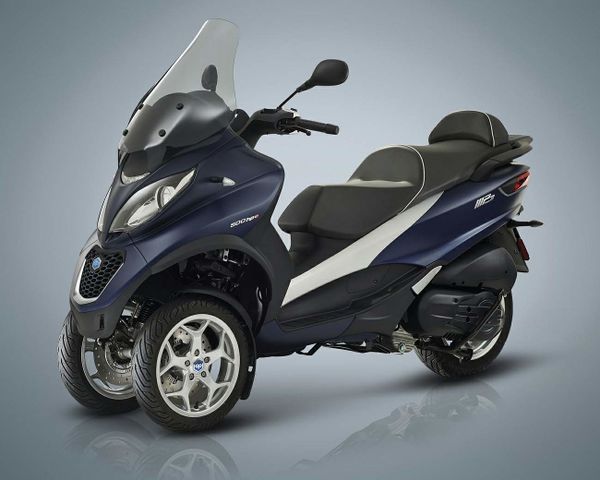 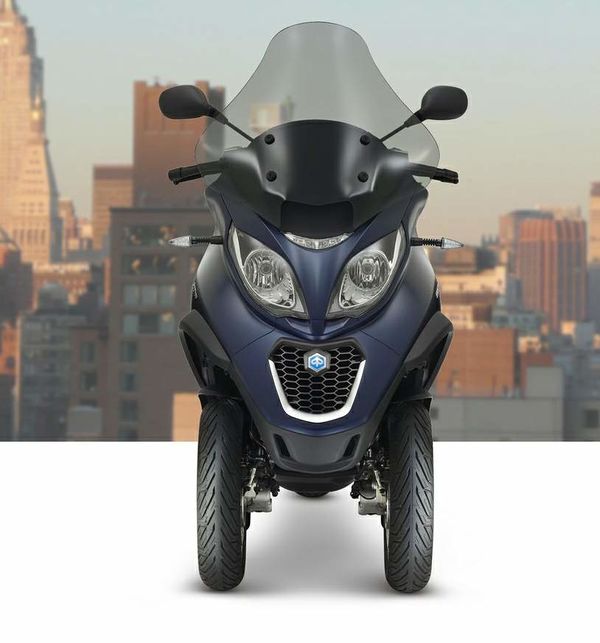 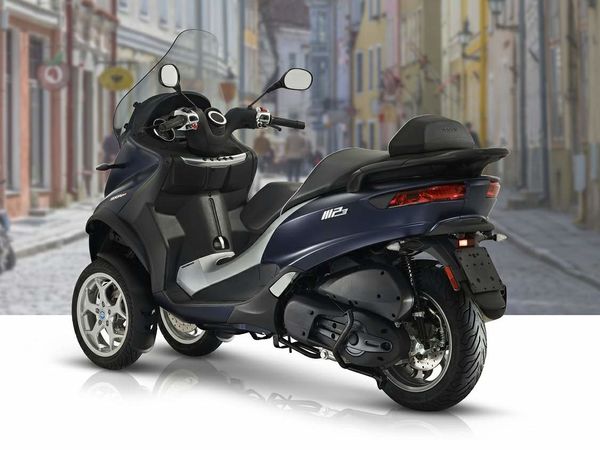 The new Piaggio MP3  the ideal commuter scooter debuts in the 500cc version with powerful yet highly economical engine. Because of its three-wheeled design its actually classed as a tricycle, and can therefore be ridden on any road, with a standard car licence. It is the first three-wheeler in the world to boast an anti-lock braking system (ABS) integrated with ASR traction control (Acceleration Slip Regulation)  A Piaggio Group exclusive and technological first in this category. The two front wheels are larger in diameter  now 13 inches  with a new design which benefits both the dynamic handling and the more dynamic look of the MP3s front end, which has become even more prominent. The new 500cc engine adopts the ride-by-wire engine control system that gives the rider the option to switch between two maps  standard and eco. Fuel consumption is down by 15% on the standard map and a further 10% on the eco, making this vehicle up to 25% more fuel efficient. This new model also boasts PMP* (Piaggio Multimedia Platform) allowing you to connect through a Bluetooth, iOS or Android smartphone, in order to open up new and different functions including average fuel consumption and navigation to your nearest authorised service centre. The entry level model of the Piaggio MP3 range is available in the two engine sizes (300 cc and 500 cc) in the Bianco Pastello and Nero Carbonio opaco color schemes, both with black saddle in contrast with the wheel rims and passenger grab handles in matt grey. The versions: different styles, same safety

The Piaggio MP3 is available in the entry level Piaggio MP3 300/500 LT and the Business and Sport versions, with dedicated equipment and color schemes. The new Piaggio MP3 500 Special Edition LT is also available. THE PIAGGIO MP3 RANGE GROWS AND IS COMPLETED STABILITY AND EASE OF RIDING COMBINED WITH AGILITY, BRILLIANT PERFORMANCE AND REDUCED CONSUMPTION. TOP SHELF SAFETY AND COMFORT AS ALWAYS FOR THE THREE-WHEELED PATRIARCH OF THE CATEGORY AND BEST SELLER FOR MORE THAN 10 YEARS

YOURBAN ALSO UPDATED TO COMPLY WITH EURO 4 EMISSIONS STANDARDS, THE MOST COMPACT AND CITY PIAGGIO MP3 MODEL Piaggio MP3 is the worlds first 3-wheel scooter, the concrete response to the demand for easy-to-handle, extremely safe city vehicles to get about in the city or reach the city centre from the ever growing suburbs. The two front wheels and the exclusive patented suspension system, conceived and developed by Piaggio before any other global manufacturer, combine the safety of a car with the simplicity and practicality of a scooter and the fun of a motorcycle with dynamic riding on corners. This is why Piaggio MP3 is able to satisfy a truly global demand: from drivers looking for a more practical yet safe alternative to the experienced motorcyclist able to appreciate the advantages and technical features of a vehicle that has, on its own, created a new market segment of which it is the undisputed leader. Two wheels ahead of the rest: a definition which not only indicates the peculiar characteristic of Piaggio MP3, but also suggests technological superiority that the revolutionary Piaggio Group three wheeler has managed to affirm. Two front wheels to travel in total safety in any weather or road surface conditions and at the same time have fun riding just as on a conventional two-wheeled vehicle. For the first time, with Piaggio MP3, automotive safety meets motorcycle riding pleasure. In the wake of the great public success achieved since 2006, the year the first model was introduced, Piaggio has developed and implemented several versions and engine capacities to meet all daily mobility requirements: from the Yourban version, the most sleek and urban Piaggio MP3 model, to the LT (acronym for Large Tread) models that stand out for a number of characteristics such as the front track widened to 465 mm, motorcycle-type turn indicators, an LED daylight running light inserted in the upper part of the leg shield and the pedal on the footrest that activates the integral braking. Characteristics which allow the Piaggio MP3 LT, in the 300 and 500 cc engine capacities, to be ridden at any age as long as the rider is a normal car drivers licence holder (Class B)*.

license. For example, in Italy, France, Great Britain, Spain and some other European Union countries, this is possible pursuant to European Directive 2006/126/EC, as long as the rider is at least 21 years of age, rides in the national territory and complies with any additional national regulations. PIAGGIO MP3: A COMPLETE RANGE

Piaggio MP3 is available in two different engine sizes (300 and 500 cc, Euro 4), each of which is available in two different versions  Sport and Business  to complete a true family three-wheeled vehicle that is capable of meeting any and all daily mobility needs. In this already wide range, now you can find the Piaggio MP3 300/500 Sport LT, an entry level version both for the 300 and 500 engine size which  simplified in its features  is available at an extremely competitive price for an even wider range of customers who want to benefit from all the safety content offered by three-wheeled technology. Piaggio MP3 500 (in its three versions: Piaggio MP3 500 Sport LT, Piaggio MP3 500 Sport LT ABS/ASR e Piaggio MP3 500 Business LT ABS/ASR) is now the flagship of the 3-wheel vehicle range supplied by the Piaggio Group. With power of 28.5 kW at 7250 rpm and torque of 45.5 Nm at 5000 rpm, it is fully capable of meeting any town, city or country mobility needs. Piaggio MP3 300 (available in the Piaggio MP3 300 Sport LT, Piaggio MP3 300 Sport LT ABS/ASR and Piaggio MP3 300 Business LT ABS/ASR versions) maintains all the aesthetic and technical characteristics that place Piaggio MP3 a step ahead of the competition, combining it with a high performance engine and reduced consumption. The 300 cc 4-stroke, 4-valve, liquid-cooled engine with electronic injection delivers maximum power of 15.5 kW at 7250 rpm, with a torque output of 22.5 Nm at 6000 rpm. These are figures that translate, on one side, into excellent response in acceleration during constant city stop-and-go riding and on the other into a top speed which is more than capable of handling motorway riding, guaranteeing the possibility of long range travel in total comfort.