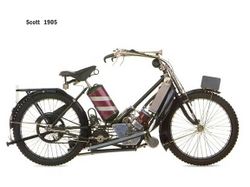 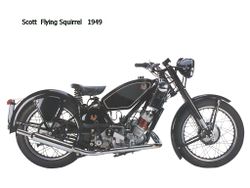 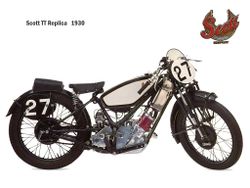 Alfred A. Scott founded the company in 1909 in Shipley, England. Scott was a pioneer in the engineering field with two stroke engines, liquid cooling and rotary inlet valves. Some other innovations of the Scott in 1911 were the first motorcycle to have a kickstart, a foot actuated gear changer and was one of the first bikes to have a chain final drive.

Most riders of the day rode big four stroke air cooled powered motorcycles and usually shied away from the cheap smelly little two strokes until an early Scott humiliated bigger four stroke bikes at a hillclimb.

Alfred A. Scott died in 1923. Production continued but the company suffered without his determination and ideas and the company went into receivership in 1931. A new owner tried to revive the company and built a few bikes in future years, the last one in 1972.

Like the other great Yorkshire motorcycle manufacture, Panther, the Shipley based Scott concern built machines of a type unique to themselves. The basic design of the engine had been established in the pioneer period when Alfred Angas Scott had first introduced his twin cylinder, liquid cooled two stroke to the world with a unit construction two speed gearbox, chain final drive and a kickstart during 1908. This model, displacing 333cc had a very limited production run, with only six machines being built by the Jowett concern.

Subsequent machines, now built at Scott's own factory at Shipley, benefited from increases in capacity and mechanical refinements but retained the layout originally introduced in 1908. 1912 and 1913 marked a high point for the firm, taking victory at the TT in both years.

The design of the Scott resulted in a machine that was light in weight which combined with the rigid triangulated frame design to endow the machine with excellent handling, whilst the engine produced enough power to make brisk progress possible. Unfortunately Alfred Scott had left the company during 1915 and little thought was given to new model development, a situation that would eventually cause the company problems. Despite this lack of development the company offered a bewildering array of models throughout the twenties and thirties, all based on one basic frame and engine design which combined with different components to produce the range.