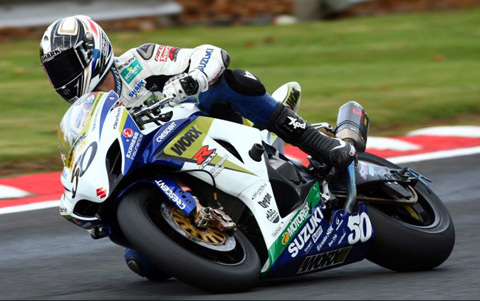 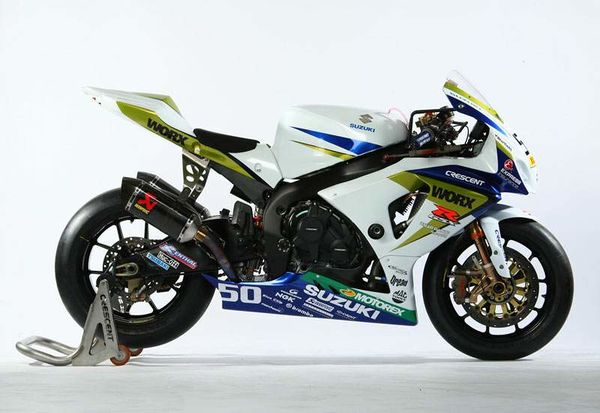 The team at Crescent Performance down in Verwood in Dorset knows all about Suzukis and have added an Akrapovic carbon end can and connector pipe (keeping the original header pipes), re-mapped the fuelling using a Power Commander V and made a few chassis tweaks to make the already nimble-handling bike steer a tad quicker still. Add the lustrous Dream Machine paintwork and you've got a bike that sounds, looks, fuels, and handles better and is lighter than the standard bike. For regular track day riders you also get a removable headlight cover with Guintoli's race number '50' on it.

Each bike has a seat cowl signed by Sylvain Guintoli which is then lacquered over, so even if someone copies the paint, it wont be pukka! There's a signed certificate of authentication that comes with the bike. Source

French motorcycle road racer Sylvain Guintoli began his professional career as a scooter racer in France. He arrived on the 250GP scene as a wildcard rider in 2000. He then joined the series full-time the year after. In 2002 he became a back-up rider for the Gauloises Yamaha Tech 3 Team, which then competed on the now extinct Yamaha YZR500 two-stroke. Guintolli was only given one opportunity to race that season at the Czech Republic round, where he finished in 17th-place.

The following season he reentered full-time competition with the Aprilia team in the 250GP class. He would continue with the team for four consecutive years, culminating with a ninth-place finish overall at the end of 2006. The year after, the Frenchmen returned to the MotoGP class aboard a Tech 3 Yamaha M1. In 2008, he switched to the Pramac Ducati team, finishing in 13th at the end of the season.

Unable to secure a premier GP ride, Guintoli moved to the British Superbike Championship (BSB) for 2009 with the Worx Crescent Suzuki Team. Guintoli started the season strong but broke his leg early in his campaign, forcing him out of competition until the final round in Portugal. Extract from Motorcycle USA.