Power was moderated via the Hydraulically operated, diaphragm-spring clutch. 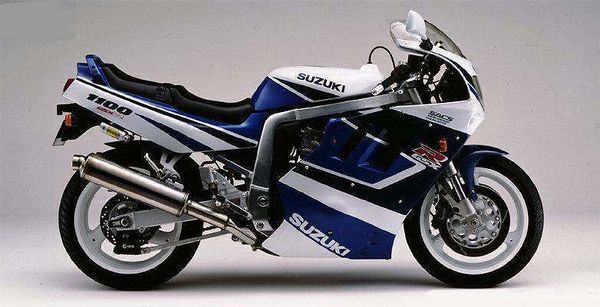 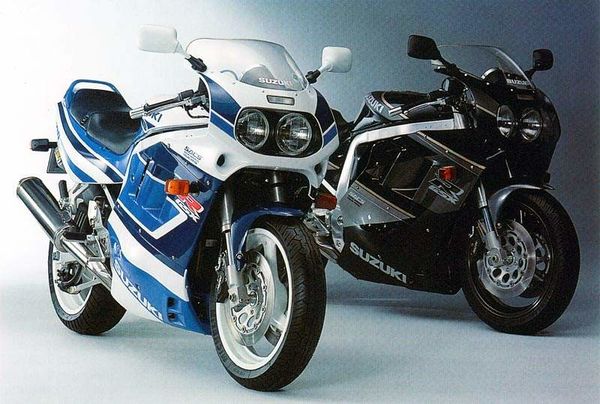 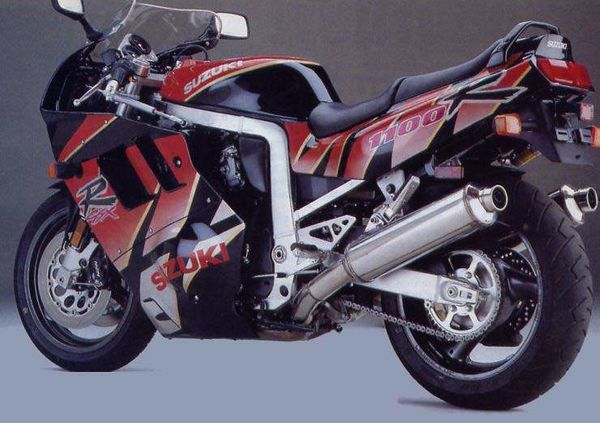 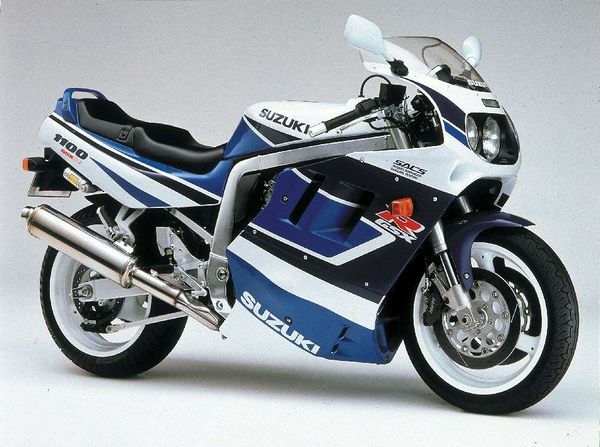 The twin headlights were now enclosed and the steering geometry revised. Rims increased in size to accommodate 120/70ZR17 and 180/55ZR17 radials. Suspension was much more compliant with multiple levels of adjustability for both the front forks and rear shock absorber. The forked rockers were replaced with separate rockers and shim adjusters in the spring retainers. Carbs increased from the 36mm Mikunis to 40mm and the intake ports were revised. Peak power was unchanged. The gearbox used additional oil jets for 3rd, 4th and 5th gears for extra cooling.

Color us fickle. Denigrate our long-term memories: Lecture us about steadfastness, devotion to purpose and commitment. Take us to task and beat us roundly; if a relationship with a sport bike were a marriage, our testers would all be divorced. The year started simply enough with the six-shooter showdown, a five-way dash-off between the latest 600s, with the CBR winning the game, set and match with balance, power and flash. We loved those 600s: light, nimble, rev-happy and relatively inexpensive. What more could you want? Next up was a two-way battle between the GSXR750 and ZX-7, so heated we instantly forgot the 600 class and joined ranks with the thousands of American sport riders currently piloting three-quarter-liter sport bikes. After all, the GSXR sprinted in the 10s at the dragstrip, and both bikes handled well enough to warrant number plates and slicks. "Yep," we all said, "these 750s are it. What more could you want?" Well, if what you want is more, the 1991 Excess Express just pulled into town and now we're mumbling, "What 750s?" We've again changed horses in the middle of the stream, and we've slid onto a couple of thoroughbreds. We cut the two most serious open-classers from the herd, lassoing Suzuki's GSXR1100 and Yamaha's FZR1000 for this month and saving the more sport-touring-oriented ponies for our next issue. As we did with the 600s and 750s, we visited the racetrack, dragstrip, top-speed location and public streets with these two and came away starry-eyed for the third month in a row.

FICKLE WITH GOOD REASON But don't be too harsh on us. Consider this before passing judgment: The Streets of Willow packs nine turns into about 1 mile, with only one 400-yard straight to stretch a bike's legs. If you aren't pointing the bike out of a tight corner, you're standing it on its nose to get into a corner. This course offers more turns than a Robert Ludlum novel, and because it's so tight and technically demanding, the fastest bikes are the ones able to get into and out of corners in minimum time. Grab the brakes, nail a downshift and flick the bike to a late apex, dial in enough throttle to arrest the lean but not enough to slide the rear tire, then do it eight more times before the lap is over. The best our light, lithe FZR600 could manage was an ultraquick 1:03.21-minute lap time on a pair of race-compound Pirelli radials. Imagine our surprise when the GSXR1100 stopped the watch with a 1:02.90 run, followed with an impressive 1:03.10 lap by the FZR1000. Aren't these liter bikes supposed to be cumbersome, hard to handle, overweight, overpowered? To put these times in perspective, consider that we've only gone faster on the Moriwaki Zero RC30 and a Yamaha TZ250, neither of which is street-legal. What these two accomplished at the Streets of Willow flew in the face of common knowledge: big bikes are fast, little bikes maneuverable. Motorcycle manufacturers work hard to blur the line between big and little, attempting to blend big horsepower with a nimble chassis while keeping mass and dimensions low and tight. Yamaha's FZR1000 is 14 pounds lighter than Suzuki's GSXR1100, and Yamaha has done a better job of incorporating the smaller profile of a 750 in an open-classer. Few will mistake the GSXR for anything but an 1100, unless they just stepped off a mid-'80s superbike such as a VFR1000 or GS1150ES; compared to the Yamaha, the Suzuki has a higher seat and bars, with a wider, taller fuel tank between the knees; Suzuki hasn't masked the bigness of a liter sport bike as well as Yamaha. The Yamaha feels like a traditional racer, with clip-ons mounted beneath the upper triple clamp to stretch the rider out over the large fuel tank, a real steel tank as opposed to the plastic tank cover on the FZR600. The foot-peg placement provides an extra inch of distance between the seat and pegs compared to the GSXR's layout, though the passenger pegs offer minimal legroom to anyone perched out back. The front seat's width makes up for its lack of padding, offering a relatively comfortable perch and affording a low 30.5-inch seat height. On the other end of the ergonomic spectrum sits the Suzuki, with a short reach to the relatively high-placed clip-ons (mounted above the upper triple clamp), slightly less room between seat and pegs and a wider, comfier seat, 32.1 inches off the pavement; passengers get more legroom, plus a grab rail the Yamaha lacks. Suzuki's devotion to function so evident in the GSXR750 isn't as apparent here. Instead, an almost sport-touring riding position greets the pilot. The stubby screen and full fairing deflect most of the wind attacking the rider, leaving a clear stream of air contacting his chest and helmet; the Yamaha does a bit better here because of its lower bar placement and fuller bubble, deflecting air over the rider's chest, leaving only the helmet in the breeze. Both bikes offer adequate if not luxurious comfort during a day-long ride. Both Yamaha and Suzuki enter 1991 with resculpted bodywork, the Yamaha featuring a single headlight where last year there were two; we're happy to report the single headlight illuminates well, and Yamaha deserves credit for including running lights in the front turn signals, a feature that helps drivers identify motorcycles at night. The Suzuki lacks this feature but adds a small running/parking light above the twin headlights hidden behind a pane of real glass. Aside from the racier front ends, both bikes have restyled body panels, most notably the Yamaha which displays part of the frame on each flank and comes from the factory with a subtle blue, gray and white paint job; the Suzuki is available in boy-racer blue and white or red and black. Amateur aerodynamicists love the sleeker fairings on this year's bikes, so we plugged in our radar gun to see what the results would be in simple numbers. Both bikes surpassed last year's best efforts, the Yamaha stretching to 166 mph in the desert morning, the Suzuki a tick behind at 163 mph. The FZR's tall, arcing bubble 5 provides a wonderful spot from which to watch the pavement rush by, considerably less turbulent than the GSXR's comparatively blunt windscreen. Neither screen is optically correct, blurring badly near the upper lip; racers will certainly change screens. Other than the distortion, both bikes work perfectly at the upper limit: stable, secure and at home.

Subtle differences between the two emerged as the miles stacked up. Both Suzuki and Yamaha provide the basics to hammer around a track or down a dragstrip, but day-to-day life points to the Yamaha as the winner of this high-strung comparison. The five-valve plant runs smoother and quieter, and while it lacks the midrange punch of the GSXR, it's still plenty strong for us mortals. The FZR's fairing-mounted choke lever isn't as handy as the Suzuki's bar-mounted lever, but the electric fuel-petcock switch, also fairing mounted, is easier to reach than the Suzuki's under-tank unit. The Yamaha buzzes the bars less than the Suzuki (and we prefer the thinner Yamaha grips), and we appreciate the extra legroom despite a seat that isn't quite the Suzuki's equal. Yamaha needs to update the FZR mirrors, however; the GSXR provides a better view rearward and a smaller blind spot. Neither bike offers a centerstand or horn worth a beep, but keep in mind that the Yamaha's $1500 higher price tag carries a year of full-coverage insurance. The FZR habitually returned better fuel mileage than the GSXR, but only by two or three miles per gallon. The Suzuki's diaphragm-spring clutch, while strong and willing to accept abuse, feels nonlinear at the lever; the pull is relatively heavy and the engagement point difficult to judge. Combined with the Suzuki's inconsistent front brake, neither hand is too sure of what it's doing all the time. Veteran riders will find themselves concentrating on the clutch engagement point just as though it were their first ride. The Yamaha feels better at the bars, thanks in part to the newly contoured switches but mainly to the consistent control action. While it's true the Yamaha's bars are lower, the seat is lower as well, which reduces the pressure on the rider's hands and wrists to a level close to that of the more-upright Suzuki. In the end, it's refinement that sets the Yamaha ahead, and refinement isn't measurable in any finite terms we know of. Given the choice, the majority of our testers side with the Yamaha, though not without plenty of feet shuffling, qualification and second thoughts. It comes down to a pair of motorcycles tied together during performance testing so closely that the dragstrip session was decided by .04 second and even the street testing left us without a solid resolution. After stacking over 4000 miles on the GSXR and FZR we did reach one solid, inescapable conclusion: liter-bike fans will love the 1991 Excess Exp