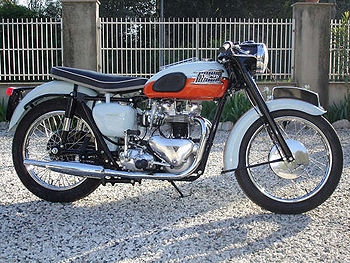 Triumph Bonneville is the name given to three distinct model lines of this notable British motorcycle. They share a parallel twin four-stroke engine configuration, but the latest motorcycle to carry this name is of a totally new design and is manufactured by the modern successor of the original Triumph company.

The early 650 cc capacity production Triumph T120 Bonneville, often known as the duplex frame model, was replaced in the early 1970s by the T140 Bonneville which was the same basic machine but with a 750cc engine. Later T120 Bonneville’s used a new frame which held the engine oil instead of a separate tank; this development of the Bonneville became known as the oil in frame version.

The current model Triumph Bonneville uses a modern engine and is unrelated to the original T120 and T140 in design. Since the arrival of this motorcycle, the earlier T120 and T140 have been popularly named 'Meriden Bonneville’s' and the modern version is known as a 'Hinckley Bonneville', reflecting the location of the two factories and to differentiate between the distinct types.

The original Triumph Bonneville was named after the Bonneville Salt Flats in the state of Utah, USA, where Triumph and other motorcycle companies made attempts on the world motorcycle speed records. It was popular (particularly in its early years) for its performance, compared to other bikes available. Although later enlarged to 750 cc, in the late 1970s and early 1980s it suffered when compared to more modern and reliable Japanese motorbikes from Honda and other manufacturers. The T120 engine, both in standard configuration and especially when tuned for increased performance, was popular for installing in café racers such as Tribsas, and particularly Tritons.

The original Triumph Bonneville was a 650cc parallel-twin (two-cylinder) motorcycle manufactured by Triumph Engineering Co Ltd and later by Norton-Villiers-Triumph between 1959 and 1974. It was based on the company's Tiger 110, and was fitted with the Tiger's optional twin 1 3/16 in Amal monobloc carburetors as standard, along with that model's high-performance inlet camshaft. Initially it was produced with a pre-unit construction engine which enabled the bike to comfortably achieve 115 mph without further modification, but later (1963), a unit construction model was made which was more compact and added slightly to the stiffness of the set-up, together with additional bracing for the steering head and swinging arm. The steering angle was altered and improved forks were fitted a couple of years later, which, together with the increased stiffness enabled the overall performance of the Bonneville to match that of its rivals.

Developed from the later 'oil in frame' (based on that of the BSA A65) version of the T120, the first few T140s, designated T140V, featured a larger capacity engine of 724 cc, a five-speed gearbox option and indicators, but still retained drum brakes and kick-start. Shortly after, the engine was further bored-out to 744 cc and front disc brakes were fitted (single discs before 1982). In 1975, along with engine modifications, the gear change lever was moved from right to left to comply with regulations introduced for the American market. Several T140 models followed featuring various modifications and refinements until production ceased with the closure of the Meriden works in 1983.

The new Triumph Bonneville produced by Triumph Motorcycles Ltd was released in 2001, and has a 790 cc parallel-twin engine of the same configuration as the original "Bonnie" as they are collectively known. The T100 Bonneville received the 865cc motor when it debuted. All 2007+ Bonneville’s have the 865cc motor. 01-07/08 Bonneville engines use a carburetor (as opposed to fuel injection), chain-type final drive, and other features consistent with the original production Bonneville. Except in The United States, All models from 2008 will be fitted with Electronic Fuel Injection to comply with emission regulations, in the United States EFI will debut in 2009. The Bonneville serves as the base from which all of Triumph's "Modern Classics" line is derived, which includes the T100, Thruxton, and Scrambler, America, and Speedmaster.

In 2006, Triumph Motorcycles Ltd. launched the "Sixty-Eight" line of Bonneville accessories. These include both vintage and modern aesthetic modifications to include seats, seat covers, cam covers, sprocket covers, petrol tank covers, tank badges, panniers, and other items. The Sixty-Eight line provides a complete set of OEM parts that allow Bonneville owners to create a truly distinctive and unique motorcycle for less cost than traditional customisations. As of 2007, all Bonneville motorcycles have the larger 865 cc engine which offers slightly more power than the 790 cc unit but with no additional weight.

The Bonneville is held by many to be a "nostalgia" bike that serves as a reminder of the 1960s-era Bonneville’s, and is marketed towards the demographic of motorcycle riders who previously owned older-model Bonneville’s, but who also want the convenience of electric starting mechanisms, fewer oil leaks, and better fuel economy. Thus, "new" Bonneville’s have a reputation for being ridden by older motorcyclists and those who enjoy this bike's timeless appeal. This claim is, however, unsupported by any concrete data, and some have reported that in major urban settings, Bonneville’s have begun to acquire a following among the 35-and-under crowd.

Many different versions of the original Bonneville were produced; suffix letters were given to denote the exact model. Listed below in chronological order are the main types and their features:

In the 1970s the Triumph Bonneville was closely connected to the actor Henry Winkler and his role as the "Fonz" on the hit show "Happy Days". Actually the machine ridden by Henry Winkler was a Triumph TR6 Trophy, not a T120 Bonneville. The high rise exhausts give this away.

In 1968, the stunt man Evil Knievel chose the Triumph Bonneville for his attempt at jumping the Caesars Palace fountain. And today, the Triumph continues to thrive with the connection it maintains with many high-profile figures, such as Tom Cruise, Matthew McConaughy, Hugh Laurie, Nicholas Cage, Pink, and Joseph Fiennes, choosing to ride Triumphs. A black Triumph Bonneville, ridden by Richard Gere, featured prominently in the popular 1982 movie, An Officer and A Gentleman. Recent requests from leading motion picture and television studios to Triumph Motorcycles have resulted in key motorcycle placements within blockbusters including Mission Impossible II, How to Lose a Guy in 10 Days, Daredevil, Tuck Everlasting, Torque, "The Punisher" and Terminator III.

The T120 Bonneville is unveiled at the Earls Court Bike Show. Its name commemorates Johnny Allen's land-speed record runs at Bonneville Salt Flats in 1956. It went on sale in 1959.

Success on the race track leads to the production of a special edition Bonneville Thruxton model, which in turn paved the way for production of hoe-grown cafe racers.

Capacity increases from 650cc to 750cc. A strike at the Meriden factory results in no bikes being produced, and marks the beginning of the end for the original Bonneville.

The last official Triumph Bonneville rolls off the production line at Meriden. Limited numbers of the bike continue to be produced by LF Harris of Newton Abbot between 1985-88.

A reborn triumph builds on success in the 1990s by launching a new Bonneville. The model sports a 790cc parallel twin power plant, and blends retro-styling with modern components.

Subtle changes are introduced to keep the model fresh. Capacity increases to 865cc, and spin-off models are introduced, including the T100, Scrambler and a new Thruxton.