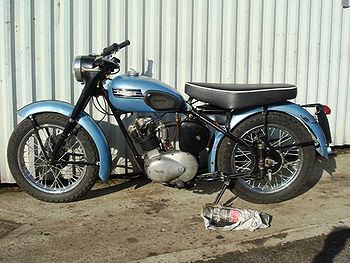 Triumph's Tiger Cub was designed unashamedly to appeal to admirers of the company's sporting twins. With the hand of master stylist Edward Turner in evidence, they were an attractive alternative to a string of lightweights powered by Villiers two-strokes. The 'Baby Bonnies' provided a desirable apprenticeship on two wheels for a generation of youths and a ride-to-work bike with style. After 1960, when learners were restricted to bikes of less than 250cc, the Cub's appeal was enormously enhanced.

Although by the 1950s Triumph was very much associated with twins, thanks to its trend-setting Speed Twin and later derivatives pre-war much of its production had centered on sports singles. The first post-war single was the much more mundane Triumph Terrier - a 150cc machine very much aimed at the commuter market, which Triumph has tended to forsake in recent years. Looking much like the Cub that followed, the Terrier was designed as a baby version of the twins and was distinguished from many of its cheaper competitors by an air of completeness and quality. Its weakest points were rear suspension by plungers and a big end assembly that proved rather too short-lived. The engine was built in unit with a four-speed gearbox and enclosed in a streamlined casing.

The first Cub, the T20, was simply a larger version of the Terrier, using the same plunger frame and cycle parts. A weak area of the frame that persisted for years was the swan-necked and unsupported headstock. This was braced by the tank, which was constructed in such a way that if this was replaced with another type of tank, the frame could prove very flimsy.

Apart from an increase in bore and stroke to give a capacity of 199cc, the engine unit changed little from the original Terrier including its irritating drawbacks. It was particularly difficult to change the chain and a new sprocket meant major dismantling, while the alternator caused electrical problems. The clutch and big end also had to be redesigned.

The Cub's bottom end was changed in 1956 to a plain bearing, but this also proved troublesome, especially in the hands of novice riders who would rev the engine before it had warmed up properly. Big end life in such circumstances was depressingly short and Triumph suffered many warranty claims before this fundamental flaw was sorted out.

A competition (off-road) version called the T20C appeared in 1967, sporting a high-level exhaust and modified wheels and suspension. The basic styling remained that of the larger Triumphs.

There were numerous mechanical and styling changes over the years. Variations on a theme included sports and off-road versions, while in 1966 the Bantam Cub appeared - a hybrid with the baby Triumph engine in a BSA Bantam frame. The last Tiger Cub was the Super Cub, launched in 1967 and dropped a year later. But the Cubs had laid the seeds for its replacement by becoming the inspiration for the 250cc BSA C15, which appeared a decade later.