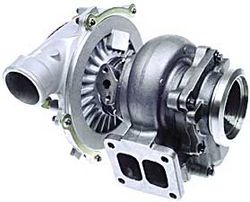 A turbocharger is an exhaust gas driven compressor that forces air into the combustion chamber. This allows for a denser fuel charge to be forced into the engine, which allows a much higher power to weight ration than a normally aspirated engine. The effect is the same as a belt or gear driven supercharger, but without the parasitic drag penalty a belt or gear system adds. The disadvantages of a turbocharger are “turbo lag” and heat. Because the turbine has to spin at extremely high rpm’s (some newer models spin at over 150,000 rpm’s) there can be a lag time while the velocity of the exhaust gas increases enough to spin up the turbo. This is mitigated in newer turbochargers by variable inlet vanes and electronically controlled waste gates. The heat issue is due to the close proximity of the hot exhaust gasses and the inlet compressor turbine. The heat can be controlled somewhat through the use of an intercooler. These are normally an air to air heat exchanger that cools the intake charge using air in the slipstream of the vehicle as a cooling medium.