Difference between revisions of "Suzuki GT500"

The Suzuki GT500 replaced the T500 twin in 1975. The new model looked very much like the classic T500, once sensationally fast and well-built machine, but in the mid-seventies already becoming out of vogue being a smoky and loud two-stroke. Its days were numbered. Suzuki made a good effort trying to modernize the once very popular model by releasing the GT500, which had a bigger tank, electronic ignition and a front disk brake.

Confusingly, the T500 was renamed to GT500 already in 1971 in Japan, but the rest of the world didn't even know about it. 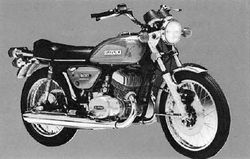 Another example of parts simplification was the use of the GT750 fuel tank on the GT500. A plastic insert replaces the unnecessary radiator access flap on the front of the tank. The larger tank gave extended range to the 500 but didn't necessarily make the machine more beautiful. A new seat accompanied the change of tank. 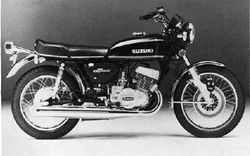 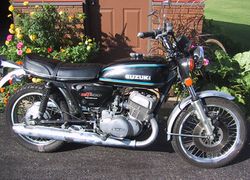 Thus modified the Suzuki 500 twin saw out its days and in 1977 the GT500B was the end of the line and only a few examples of this model were ever delivered by the factory. The last few GT500s on the showroom floor were heavily discounted and moved away to make way for the new four cylinder four stroke range.

The 1977 B-model was delivered in red and blue color this year, but in USA and Canada they also sold a black version of the GT500.

Significantly the GT triple range, which had stifled development on the Titan, died with it.