AJS introduced a new chain driven overhead cam single cylinder racing motorcycle for the 1948 season. Named the 7R it became a legend in its own lifetime winning numerous races at all levels including the Manx and Grand Prix, a tradition that it continues today in classic events.

The driving force behind the 7R was Jock West, then the AMC sales director who championed the concept of an over the counter 350cc racing machine at boardroom level and would later support the development of the Matchless G50 derived from the 7R. Like its major rival from Bracebridge Street, the 7R benefited from the experience gained with each passing season with refinements being incorporated into the following year's model. The models 29bhp rose steadily over its production life with the final models producing in the region of 39bhp. Of equal importance in aiding the 7R maintain its position at the front of the field was the attention paid to reducing the frontal area and consequently improving the machines overall performance. A side effect of the sliming down of the fuel and oil tanks and the reduction in the overall height of 7R was that it ended up as being one of the most attractive motorcycles ever produced.

This particular machine dates from the final year of 7R production and consequently represents the 7R at the zenith of its development. It was raced by Tommy Robb during the 1960's. The fuel tank was modified by Jim Sheahan of Bracknell for the TT at Tommy Robb's request in order to allow him to adopt a more natural riding position. During the 1965 TT Tommy finished 14th with an average speed of 89.51mph securing a bronze replica. The bike was subsequently sold to Bob Deacon who raced it for a number of years before part exchanging it for a Yamaha at Len Manchester Motorcycles of Melton Mowbray. It was purchased from there by David Hunt who raced it on the Island in the 1970 50th Golden Jubilee Manx Grand Prix, finishing 31st out of 56 finishers with an average speed of 85.378mph. Its next outing on the Isle of Man was the 1976 Manx, where it averaged 86.39mph on its way to securing 44th place.

A break in competition occurred for the 7R until 1982 when the she took part in the TT Parade and subsequently started to compete in Classic Club meetings until 1991 and also took part in the 1989 Kennings Championship, finishing second overall. After Mr Hunt retired from competition the bikes engine and gearbox were used by Eric Kirk for the 1991 Manx who went on to race the complete machine at the 1994 Manx. For the 1995 Manx she returned to the Island with Robert Hirst in the saddle finishing 8th with an average speed of 91.51mph and would return for the Manx every year until 2002. Following her retirement she has been used for the occasional parade.

The most popular AJS racebike was the single-cylinder 350cc 7R, known as the "Boy Racer". Introduced in 1948, the 7R was hugely successful and was later enlarged to 500cc to make the Matchless G50.

The bike has a 4-speed, manual transmission. Power was moderated via the dry, multiplate.

It came with a 2.75 x 19 front tire and a 3.50 x 19 rear tire. Stopping was achieved via drum in the front and a drum in the rear. The front suspension was a telescopic fork while the rear was equiped with a dual shocks. The 7R was fitted with a 1.59 Gallon (6.00 Liters) fuel tank. 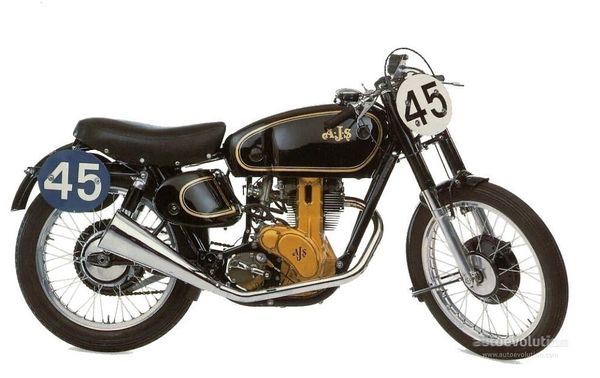 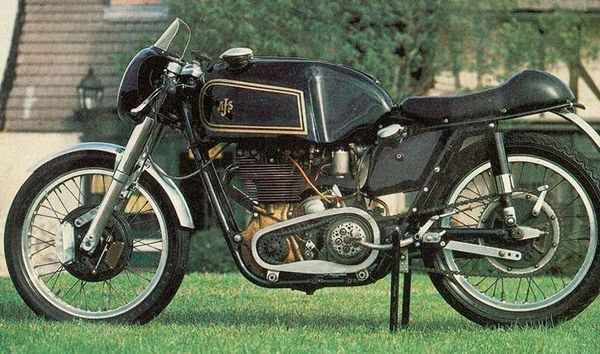 The 1952 AJS 7R has, at its heart, an air-cooled, four-stroke, 349cc, single cylinder powerplant mated to a four-speed manual transmission, and can produce a claimed 40 horsepower at 8000 rpm. This machine has had repeated success at the Junior Isle of Man TT, making it one of the most sought after machines in its class. Standard features include a telescopic front fork, dual shocks as a rear suspension, a dual seat, a large, 23-liter (6-gallon) fuel tank, a small windscreen, a blacked-out frame and laced wheels.