The bike has a Straight cut gears and integrated flexible coupling transmission. Power was moderated via the multiple wet clutch.

The big news for the mighty Aprilia Tuono in 2017 is more refinement. Everyone seems to agree, for now, that 1077cc of V-4 power is enough to get the job done, so the Tuono gets a full-color TFT dash, a Euro-4 compliant muffler, and cruise control.

Tuono V4 1100 is the latest and most spectacular evolution of a sport naked dynasty, born in 2002 out of Aprilias intuition to strip down and fit a handlebar on their flagship superbike (which at the time was the V-twin RSV mille), thereby combining all the advantages of a chassis par excellence with the fun of sitting up and dynamic riding. The patriarch of the new supernaked category was called the Tuono 1000 R, the first ultra high performance naked. In 2013 an even more refined and powerful version was introduced: Tuono V4 R ABS which offered the new features which had already been successfully introduced on the second generation RSV4, such as the higher performance engine (170 HP), the revamped and recalibrated aPRC system and a Race ABS system capable of withstanding even the extreme stress of the track. The know-how acquired in years of victorious competition at top levels and the experience of the Tuono history now allow Aprilia to exceed limits which had previously seemed insurmountable: introducing the new Tuono V4 1100, an exclusive thrill generator and fun in its purest state. New 175 HP engine with a powerful maximum torque of 120 Nm, revamped chassis setup to achieve better agility, fine tuned aPRC, new look, the possibility of connecting your smartphone to the vehicle through the PMP platform and two distinctly outfitted versions (Factory and RR) that have the same, strictly Aprilia character in common.

Simply incomparable, now more than ever. There is no other naked bike as sporty and effective as the Tuono V4 1100; its close derivation from the seven times World SBK champion is clear when you look at the beautiful double rail frame made from pressed and cast brushed aluminum elements, a structure that boasts unrivalled balance between torsional stiffness and flexibility; the new 65° V4 engine is set inside it in all of its purity and uniqueness, just like a precious stone set in a ring. In order to make the Tuono V4 1100 more agile on the road, without losing its legendary fierceness on the track, the headstock angle was changed from 25.1° to 24.7° and the trail went from 107.4 mm to 99.7 mm. These sleeker chassis dimensions combine with the 6 mm longer aluminum swingarm, the various suspension setups and the consequent adjustment of the electronic controls, including the wheelie control feature, to obtain a rock solid chassis at high speeds but more agile in direction changes. Tuono V4 1100 RR is fitted with a high quality suspension: the upside-down Sachs fork with 43 mm stanchions has separate "one by one" hydraulic adjustments in compression and rebound as well as spring preload adjustment on both stanchions. The Sachs shock absorber with built-in piggy back allows the hydraulics to be adjusted in rebound and compression, as well as spring preload adjustment. The new standard calibration on both units is functional to the increased performance of the V4 engine and the revamped chassis dimensions and it also takes into consideration use of the bike on the road without any prejudice to the possibility of personalisation in order to obtain maximum accuracy and precision in true racing style riding. The more refined Factory version of the Aprilia Tuono V4 1100 comes with par excellence standard equipment unique in its category, borrowed from the king of superbike, the Aprilia RSV4 RF. The suspension section is made up of a trio of Öhlins elements (fork, rear shock absorber and steering damper) characterised by ultra fine tuning possibilities and a base setup that has been calibrated to give the rider maximum performance feedback in sport riding.

The braking system on the new Tuono V4 1100 range has a pair of refined Brembo monobloc M432 callipers on the front which mounts pads with the best possible friction coefficient that grip lightweight aluminum flanged discs (for Tuono V4 1100 Factory). The wheel rims are the same for both models: their lightweight quality contributes to a maximum reduction of the gyroscopic effect, all to the advantage of great handling. Tuono V4 1100 Factory is shod with the sportier Pirelli Diablo Supercorsa, with a wider 200/55 on the rear, in any case approved for street use and available for the Tuono V4 RR as well. The top of the line in electronic controls The Tuono V4 1100 range has received all the upgrades to the already exceptional aPRC system that was first seen on the RSV4 RR and RSV4 RF. As everyone knows, aPRC (Aprilia Performance Ride Control) is the patented control systems package derived directly from the winning technology in the world Superbike championship, the most complete and refined of any on the market, which provides tire circumference self-calibration features and wheelie control. The third generation of aPRC, standard equipment on the new Tuono V4 1100 units, fully integrates with the fine full Ride-by-Wire multimap electronic management of the revamped V4 engine. As always, the Tuono V4 benefits from a specifically developed calibration, but it has been evolved even further in order to provide maximum thrills on the road and maximum performance on the track.

The Tuono V4 1100 RR and Tuono V4 1100 Factory aPRC includes: - aTC: Aprilia Traction Control, adjustable on the fly (without having to release the throttle) to 8 settings thanks to a practical joystick on the left side of the handlebar, now has even more fine tuned and higher performance operating logic. The percentage of slippage allowed also differs depending on the speed in the turn: the system's performance is smoother and guarantees high support in long sweepers at high speeds without penalising grip coming out of slow turns; - aWC: Aprilia Wheelie Control, with 3 selectable settings, has been recalibrated to be even more sporty in map 1, whilst still guaranteeing a slight lift in quick acceleration and subsequent smoother descent of the front wheel to the tarmac; - aLC: Aprilia Launch Control, the assisted starting system for use on the track only with 3 settings; - aQS: Aprilia Quick Shift electronic gearbox for ultra-fast shifting without closing the throttle or using the clutch. In addition to the third generation aPRC, the Tuono V4 1100 range is fitted with the highly advanced Race ABS system, developed in collaboration with Bosch to guarantee maximum safety on the road, without sacrificing any performance on the track. The 9MP system, which weighs in at just 2 kg, uses an actuation strategy called RLM (Rear wheel Lift-up Mitigation) that, as the name suggests, mitigates rear wheel lift in more abrupt braking situations; it can also be disengaged and it is adjustable to three levels easily by accessing the control menu on the instrument cluster. - Level 1: this is dedicated to track use but is also approved for street use. It acts on both wheels to guarantee the best possible performance, even in the most intense braking conditions at any speed. It takes nothing away from the pleasure and performance of "extreme" riding. With this strategy RLM is disabled. - Level 2: this is dedicated to sport riding on the road, acts on both wheels and is combined with the RLM tip over system which engages progressively based on the vehicle speed. - Level 3: this is dedicated to riding on surfaces with poor grip, acts on both wheels and is combined with the RLM tip over system. Each of the three Race ABS maps can be combined with any one of the three engine maps (Track, Sport, Road) to allow riders with varying experience and skill levels to find the best possible combination. Higher performance than the V4 The primary goal of the changes made to the already extraordinary Aprilia Tuono V4 engine was to increase torque, especially at medium-low revs in order to increase effectiveness and riding pleasure on the road. To achieve this goal the engine capacity was increased to a full 1077 cc thanks to the new cylinder bore which was taken from 78 to 81 mm. This increase in displacement also resulted in higher top performance: the power peak went from 170 to 175 HP and places the Tuono V4 1100 range at the top of its segment (already at 8,000 rpm almost 20 HP more than before are available). This makes the new sport naked from Noale a complete weapon for thrills and effectiveness with superlative torque values that dominate on the road and uncompromising top performance to dominate on the track. The Tuono V4 1100 is the only naked powered by a 65° V4 engine° with unique characteristics. The narrow V architecture made it possible to build an engine with incredibly reduced longitudinal bulk which favours centring the weight and creating a compact chassis. As in previous models, the monobloc crankcase with integrated aluminum cylinder liners ensures maximum rigidity and consistent performance. The upper half of the engine case is now made with a new shell fusion and has been lightened and reinforced; it also now has an optimized ventilation system in order to reduce power loss due to air pressure inside the engine crankcase. Also, the crankshaft now has connecting rod pins reduced to 36 mm in diameter, the pistons are new and the Pankl connecting rods are lighter by a total of 400 grams. The other technical particulars which made this engine so popular have remained unchanged, such as the removable gearbox and the innovative timing system kinematics: the chain camshaft drives only the intake camshaft which in turn drives the exhaust camshaft via a single gear. This solution allows for extremely compact heads especially in the area beneath the frame spars, much narrower than would otherwise be possible. A countershaft dampens vibrations even more than in a 90° V engine. Full Ride by Wire technology eliminates any direct connection between the throttle grip and the throttle valves, which are entirely controlled by a latest generation Marelli control unit that also controls the ignition and the four injectors. Each bank is fuelled by two throttle bodies managed by a dedicated servo unit. This means that the aperture of the throttle valves and consequently the quantity of fuel injected can be controlled independently. This solution opens up practically infinite possibilities for power delivery control.

The new and powerful engine ECO now allows the three maps to be more easily managed, each one of which corresponds to a different engine power output and now also to a dedicated engine brake management map. The two classic engine management maps, Track and Sport, are now joined by a Road map which is full power instead of the previous generation Tuono V4's limited power map. All three maps are more manageable and less aggressive than the previous version, allowing a better relationship between the opening of the throttle and the torque sent to the wheels. This is a solution that provides further advantages, such as reducing rear tire wear and better management of the significant power that the new Aprilia V4 is capable of developing. 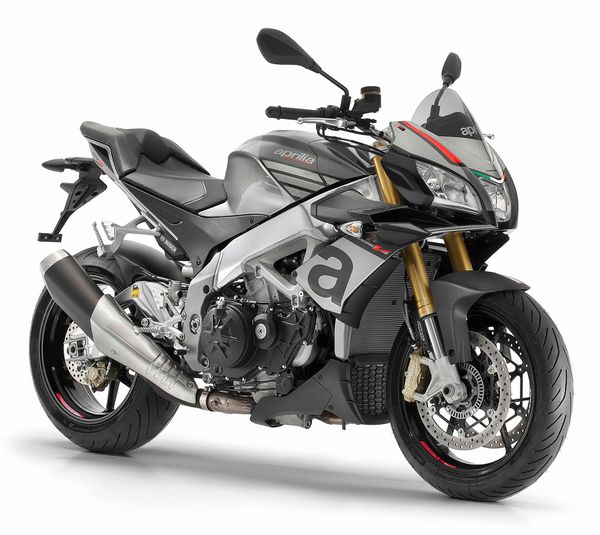 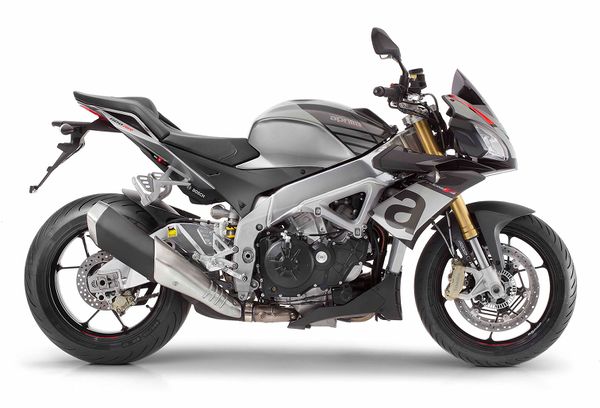 The 2015 MY Aprilia Tuono V4 1100RR comes as a descendant to the successful Tuono V4 R. The house of Noale have focused mainly on improving the V4 engine, and they have succeeded. To do this, the cylinder bore was enlarged, from 78 to 81mm, resulting in a new engine displacement of 1077cc. Putting it in numbers, the new V4 produces 175 horsepower and 120 Nm of torque as opposed to the 167 horsepower and 115 Nm of torque of the Tuono V4 R.

Of course, the Italian engineers have fitted all the technology from the RSV4 on the Tuono also, making it a suiting two-wheeler for open-road and track Sundays alike. Technologies such as the Aprilia Performance Ride Control (APRC) and the "Race ABS" make the Tuono perform like no other, under stressful situations on the track, or on a simple highway haul, it will be able to put a smile on the face of those who enjoy a zero-compromise streetfighter.