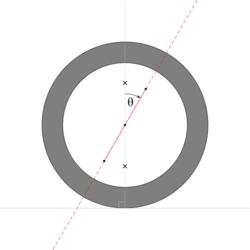 θ is the caster angle, red line is the pivot line, grey area is the tire. A positive caster angle is shown with the front of the vehicle being to the left. 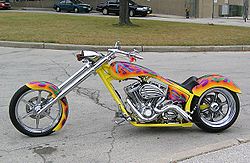 Caster angle[1] or castor angle[2] is the angular displacement from the vertical axis of the suspension of a steered wheel in a car, bicycle or other vehicle, measured in the longitudinal direction. It is the angle between the pivot line (in a car - an imaginary line that runs through the center of the upper ball joint to the center of the lower ball joint) and vertical. Car racers sometimes adjust caster angle to optimize their car's handling characteristics in particular driving situations.

This topic when specifically applied to bicycles and motorcycles is more commonly referred to as rake and trail. This is discussed in the article on Bicycle and motorcycle geometry.

The pivot points of the steering are angled such that a line drawn through them intersects the road surface slightly ahead of the contact point of the wheel. The purpose of this is to provide a degree of self-centering for the steering - the wheel casters around so as to trail behind the axis of steering. This makes a car easier to drive and improves its directional stability (reducing its tendency to wander). Excessive caster angle will make the steering heavier and less responsive, although, in racing, large caster angles are used to improve camber gain in cornering. Caster angles over 10 degrees with radial tires are common. Power steering is usually necessary to overcome the jacking effect from the high caster angle.

The steering axis (the dotted line in the diagram above) does not have to pass through the center of the wheel, so the caster can be set independently of the mechanical trail, which is the distance between where the steering axis hits the ground, in side view, and the point directly below the axle. The interaction between caster angle and trail is complex, but roughly speaking they both aid steering, caster tends to add damping, while trail adds 'feel', and returnability. In the extreme case of the shopping trolley wheel, the system is undamped but stable, as the wheel oscillates around the 'correct' path. The shopping trolley/cart setup has a great deal of trail, but no caster. Complicating this still further is that the lateral forces at the tire do not act at the center of the contact patch, but at a distance behind the nominal contact patch. This distance is called the pneumatic trail and varies with speed, load, steer angle, surface, tire type, tire pressure and time. A good starting point for this is 30 mm behind the nominal contact patch.

Arthur Krebs applied the first positive caster angle to automotive front-train in his 1896 car, English patent : "To ensure stability of direction by means of a special arrangement of fore-carriage, that is to say, to re-establish automatically the parallelism of the two axles of the vehicle when there is no tendency to keep them in any other direction, or after a temporary effort has caused them to diverge from said parallelism. [...] The axle of the fore-carriage is situated a suitable distance behind the projection of the axis of the pivot-pin in order to ensure the stability of direction above referred to."