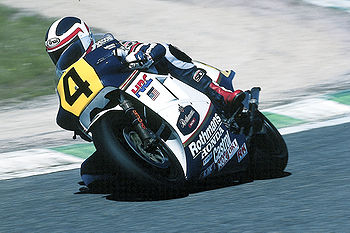 Friendly, enthusiastic and wildly talented on the track, Freddie Spencer rocketed to fame in 1983 when he became the youngest ever 500cc World Champion. On 4th July - the USA's Independance Day, at the age of 20, he became the youngest ever 500cc GP winner at Spa riding the Honda NS500. Two years later he recaptured the title as well as the 250cc championship winning an amazing 14 races. Ironically, he consider becoming a Protestant minister before turning professional as a rider.

Born in 1961, he first raced at the age of five in TT Scramble dirt track events in Dallas, Texas, USA. By the time he was 11, Freddie had already won ten state titles in short and dirt track racing. In 1972 he made his first foray into road racing, riding in the 0-250cc 'Stock' class on a 100cc Yamaha at Green Valley Raceway in Dallas. By 1977 he had won 12 national road racing championships, competing in both AMA and WERA sanctioned events.

He turned professional in 1978, winning every race in the AMA 250cc Grand Prix novice class. The following season he went on to win the 'Expert' division - finishing in 1st place in all but one race. In 1980, he signed with Honda America to race in the AMA Superbike Championship. He also had his first taste of international racing that year and won the opening races of the Trans-Atlantic Match series on a production based Yamaha TZ750, beating World Champion, Kenny Roberts and former title holder Barry Sheene - both of which had full factory support.

In 1980, he also competed in the European GP in Belgium for the official Yamaha team, qualifying in 6th position. The following year, Spencer signed with the main Honda squad to race in selected GP events as a lead-up to his first full World Championship series in 1982.

In 1983 he returned with a vengeance, winning the 500cc GP title by two points winning 6 races and 6 pole positions on the last race of the season. he played a major role in the development of the new four-cylinder NSR500 for Honda in 1984. Unfortunately, due to teething problems he started only five races but still won four and finished fourth in the championship.

In 1985 he became the only rider to win the 250cc and 500cc titles in the same season. In the smaller class he raced in ten events, took pole six times and won seven races. At 500cc level he qualified first nine times, set nine new lap records and won seven out of eleven races. Incredibly, he also won all three major divisions, 250cc, 500cc and SBK at the AMA National at Daytona. He remains the first and only rider to do so.

Unfortunately, the strain of such competition too its toll and Freddie was struck with severe tendonitis in his forearms. The 1986 season was a disaster and after three years of struggling to finish, the ailement finally finished his professional racing career. He competed again in 1993 but it was a fiasco and at the age of 32 he finally retired.