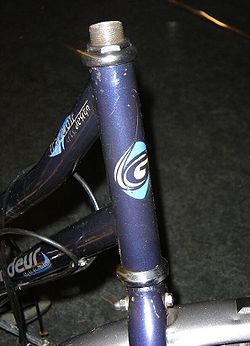 A bicycle head tube with a partially installed bicycle headset, the locknut has yet to be fitted onto the fork steer tube.

In vehicle frames, most commonly of a bicycle or motorcycle,[1] the head tube is the outer tube within which the steer tube pivots.

The head tube holds the bearings which allow the front fork steer tube to pivot freely.

In motorcycles, these bearings are also referred to as headset, or steering head bearings[2] or steering neck bearings.[3] These are usually tapered roller bearings.

In motorcycles, the steering axis angle is called the rake and is measured counter-clock-wise from the vertical when viewed from the right side. A 0° rake would be vertical. For example, Moto Guzzi[4] offers: