In 1969 Sachs took control of the firm and the Hercules name stayed, most notably used in association with the W2000 of the mid 1970s - The world's first commercially built Wankel rotary engined motorcycle. Hercules took on a very Japanese-look in appearance looking much like the venerable Honda CB750K from forks to fuel tank and seat. Its 294cc or 882cc (depending on how you measure) motor produced a claimed 27 bhp at 6,500 rpm and gave a top speed of almost 90 mph. But the rotary, which was marketed under the DKW brand in Britain, did not sell well, and recent production with the marquee has been limited to two-stroke motorcycles smaller than 100cc.

German industrial giant, Fichel and Sachs, had manufacturing rights to the Wankel rotary engine. To promote this radical new design they had their subsidiary motorcycle company, DKW, design and build the first mass produced rotaty motorcycle. Unfortunately 1974 was the period of gas shortages, and while the DKW was fast, gas mileage dipped to under 30 mpg when ridden hard. Sales were disappointing and production ended. These machines were marketed as Hercules in North America. The next machine to have a rotary engine would be the Suzuki RE5.

The engine was a air cooled single disk wankel.

The bike has a 6-speed transmission. Power was moderated via the Wet multi disc.

Presented in 1974, the Hercules W-2000, built as a "limited trial" machine to test the public acceptance of a new power source for motorcycles, is the first Rotary-powered offered for public sale through a dealer network. 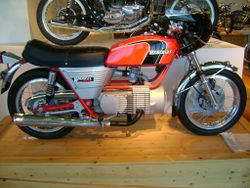