The engine was a air cooled single cylinder, four-stroke. A 38.1mm bore x 38.1mm stroke result in a displacement of just 49.0 cubic centimeters. Fuel was supplied via a overhead cams (ohc).

The bike has a automatic transmission. Power was moderated via the Dry-type, multi-plate shoe.

It came with a 80/90-14 front tire and a 90/90-14 rear tire. Stopping was achieved via single disc in the front and a expanding brake (drum brake) in the rear. The front suspension was a telescopic forks with hydraulic damping while the rear was equipped with a unit swingarm. The NSC50R was fitted with a 1.45 Gallon (5.50 Liters) fuel tank. The wheelbase was 49.41 inches (1255 mm) long. 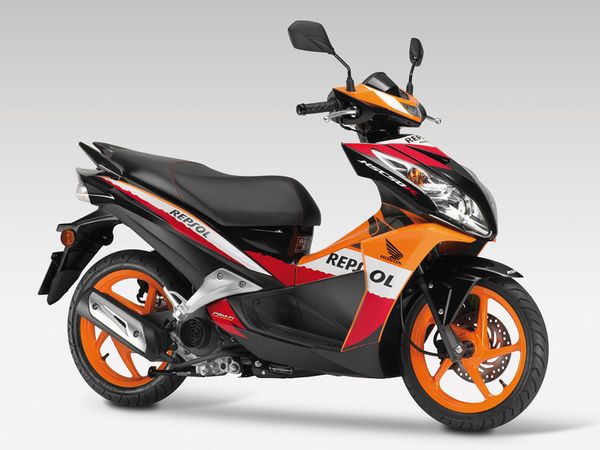 How about a slender and swift 50cc scooter proudly displaying the iconic Repsol livery? Honda knows a lot of fellows are into such a combination, and that's why the 2012 NSC50R was built. Economical and easy to maneuver, this scoot also comes with Honda's acclaimed Combined Braking System for enhanced stability when braking.

Add in the beefy 14" cast aluminum wheels for a smooth ride on bumpy roads, plenty of room for a passenger and the lightweight build which makes squeezing through slower traffic a breeze, and you've got an exceptional entry-point scooter for daily urban and commuting fun.