From CycleChaos
(Redirected from JAP)
Jump to navigation Jump to search 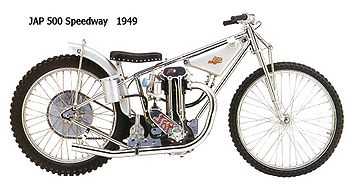 JAP are the initials of Mr. J.A. Prestwich who was responsible for the design and manufacture of engines used in a great many famous motorcycle brands and had numerous racing successes. JAP engines were still used in speedway bikes well into the 1960's. Complete motorcycles were built from 1904 to 1908, and subsequently the factory concentrated on supplying its proprietory engines to other manufacturers. After 1945, production was taken over by the Villiers Motorcycles factory.

JAP engines were also used in a wide range of industrial and other non-motorcycling applications including railcars and early Reliant 3-wheelers.