The Kawasaki police motorcycles have been produced in four series:

All series have been equipped with windshields, saddleboxes, pursuit lights, and folding floorboards rather than footpegs. All are a single-rider version of the Universal Japanese Motorcycle design popular until the advent of specialized motorcycle designs divided the market into cruisers, sport bikes, touring bikes and other specialized applications. All series are also designed to carry radio communications equipment and are wired for electronic sirens.

All have inline, 4-cylinder, normally-aspirated four-stroke, overhead-cam engines and chain drives, and larger generating systems than similar civilian models. C- and P-series Police Specials were also equipped with tires designed to stay on the rim in case of deflation. These "run-flat" tires, supplied by Dunlop, increase safety significantly by enabling the rider to safely slow to a stop if the tires are damaged in a high-speed pursuit.

The most obvious difference between the KZP and the earlier series was the addition of a fiberglass fairing, carrying the front lights and windshield and also containing storage for small items. This has become the most identifiable police-service motorcycle design in the world, as the fairing has a profile unique to the KZP. Earlier Kawasaki police motorcycles had a windshield with a shape similar to that found on the older Harley-Davidson Electra Glide motorcycle then popular with law enforcement.

The C-series borrowed features from the American police motorcycles with which it was designed to compete. These included a spring-cushioned saddle, and a speedometer equipped with a solenoid to trap the indicator needle against the glass when the pursuit lights were activated, to mark the speed at which a lawbreaker was traveling at the time. Both of these features were eliminated in the KZP, which was equipped with a standard speedometer and tachometer.

Mechanically, there were few changes within the series. The KZP has over 95% parts compatibility across the entire production run, and in fact the throttle twist assembly, which holds the switches for the pursuit lights and siren, kept the "M" position used by the C-series to lock the speedometer needle. A major change was in 2002, when the chain size was changed from 630 to 530, saving weight and increasing acceleration.

The most obvious change in the P-series was the introduction of LED lighting in 2003.

Kawasaki produced Police Specials for the North American market in a plant in Lincoln, Nebraska, with the last one rolling off the assembly line in September, 2005. They are still in use with many major law enforcement agencies, and are the motorcycle of choice for private companies providing funeral and VIP motor-escort services.

As a 600-lb motorcycle, the KZP is reported by riders to be stable and responsive, with fast pick-up and comfortable ride. However, this is not a motorcycle for beginning riders, due to sheer mass and power. Private purchasers are advised to take advanced riding courses, especially those offered by police instructors familiar with the characteristics of the KZP.

The primary crash-protection feature is the chrome-plated crash bars at the front of the frame and surrounding the saddleboxes and rear fender.

The top of the windshield is considered the worst feature, being in the primary vision zone of riders between 5'8" and 6' in height.

The second-most-reported complaint is with the throttle twist grip, which requires considerable torque to operate (characteristic of multiple-carburetor motorcycles). The use of manually-operated cruise controls has become common.

The saddle is comfortable even after long rides, and the floorboards allow the feet to be moved to different positions for comfort. The radio mount is not suitable as a passenger seat, but can be removed and a regular two-rider seat may be mounted. 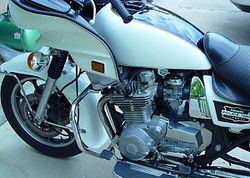 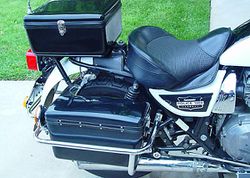 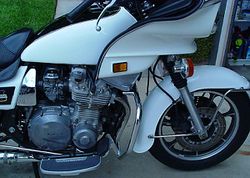 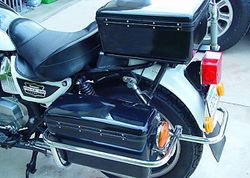 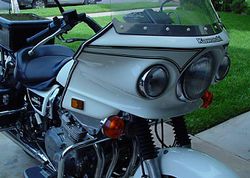 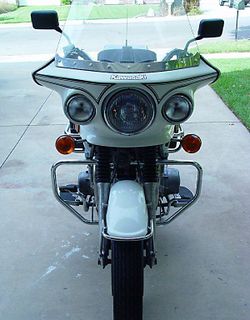