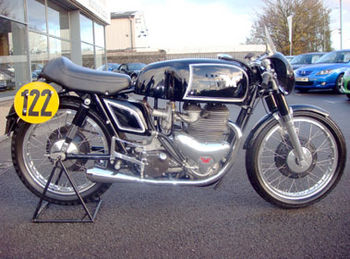 The progenitor of the MatchlessG45 made its first appearance at the 1951 Manx Grand Prix when Robin Sherry rode a machine clearly derived from the G9 twin to a highly creditable 4th place. The same motorcycle returned to the Island in 1952, firstly in the hands of Ernie Ring in the 1952 TT who failed to finish and then in the Senior Manx Grand Prix where it set new race and lap records on it's way to securing victory in the hands of Derek Farrant.

Following these successes development of what was now typed the G45 continued under the direction of H J Hatch with a view to putting the machine into production for the 1953 season. From AMC's marketing point of view a racing twin clearly derived from the roadgoing G9/Model 20 machines could help them establish their twin cylinder range in an increasingly competitive market and experience gained with the racing machine could be applied to "hotter" variants of the G9/Model 20 intended for the North American market.

The new model benefited from the development work already carried out on the 7R utilising that models cycle parts in largely unaltered form to house the engine and transmission. At first sight the engine itself appeared familiar resembling as it did the roadgoing G9 power unit and retaining the 66mm x 72.8mm dimensions of the road model. However there were considerable differences, the crankshaft was of an alloy steel forging and featured shrunk on flywheels. The cylinder heads which accommodated a pair of Amal GP carburettors were alloy castings and were topped by electron rocker covers (which enclosed a considerably revised valve train) as were the separate cylinders which featured deep finning to aid cooling. Items such as the camshafts, which were of a more radical profile, valve springs, valves and pistons also differed markedly from the road going engine. What is possibly more surprising is what was retained from the road going power plant. The timing gear and oil pump, the majority of the main bearings and the conrods were all taken from the production engine and in use gave very little trouble. In fact the most common cause for engine failure in what was a generally reliable power unit was the special alloy pushrods. A chain primary drive took the power from the engine to a Burman racing gearbox.

The G45 achieved some remarkable successes on the track during the mid fifties, including two Senior wins in the New Zealand Grand Prix a fifth in the 1955 Dutch TT and two sixth places in the 1955 and 1956 TT's, however even when the machine was at its height it did not seem to get the support from AMC that one would have imagined. A minor redesign occurred during 1956 with revised head castings and an improved valve train being introduced but little else was done to develop the machine despite its potential, development instead shifted to an enlarged version of the overhead cam 7R single which emerged in 1958 as the Matchless G50 entering production in 1959