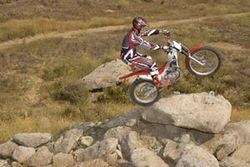 Montesa became Spain's first major motorcycle manufacturer when it was founded in 1944 by Francisco Bulto, who soon afterwards left to found Bultaco, and Pedro Permanyer. The earlier bikes included successful two-stroke road racers and the memorable Impala roadster. In recent years the Barcelona firm has been better known of its successful series of trial bikes, including the Cota. During the 1980s Montesa ran into financial problems leading to an association with Honda, whose engines have been used by Montesa since then.