A sidecar is a one-wheeled device attached to the side of a motorcycle, scooter, or bicycle, producing a three-wheeled vehicle.

The first mention of a sidecar is in a cartoon by George Moore in the January 7, 1903 issue of the British newspaper "Motor Cycling". Three weeks later a provisional patent was granted to Mr. W. J. Graham of Graham Brothers, Enfield, Middlesex. Early plans to have the sidecar removable have never been very successful. A motorcycle with a sidecar is sometimes called a combination, an outfit, a rig or a hack. 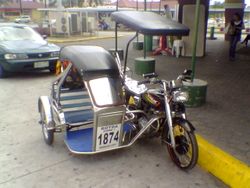 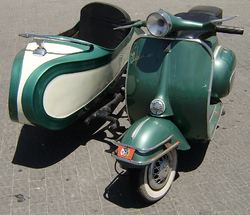 A sidecar motorcycle is a three wheel vehicle with the side wheel not directly aligned with the rear motorcycle wheel, and is usually powered by the rear wheel only. This is different from a motorcycle trike, where both rear wheels are powered and share a common axle. However, either P.V. Mokharov of the Soviet Union or H.P. Baughn of Great Britain seem to have to been the first to employ a driven sidecar wheel in 1929. Baughn two-wheel drive outfits were so successful in trials events in the early 1930s that there were attempts to have the ACU ban them from competition. A great many companies experimented with two-wheel drive in sporting events and indeed many companies employed them in military vehicles prior to the commencement of WWII. Currently, the Russian manufacturer Ural produces several models with two-wheel drive that can be engaged as desired.

The sidecar consists of a frame (which is rigidly fixed to the motorcycle's frame on one side and is supported by the sidecar's wheel on the other side) and of a body. The body typically provides one passenger seat and a small trunk compartment behind. In some case the sidecar has a removable soft top. In some modifications the sidecar's body is used for carrying cargo or tools (like a truck's platform). The sidecar is typically mounted so that the motorcycle is closer to the center of the road (sidecar on the right for right-hand traffic.)

A sidecar makes the handling of a bike asymmetrical. Without a brake on the non-driven sidecar wheel, the sidecar will pull towards the bike under braking, and towards the sidecar under acceleration. While a sidecar pilot is described as driving rather than riding, with all but the heaviest rigs, the comparison to a car is weak. Driver and passenger body position affect higher speed handling, especially on dirt or other uneven surfaces. If the sidecar and bike geometry are not coordinated the combination will be unstable, especially at speed, with shimmy becoming a dangerous problem. The motorcycle's steering geometry will be set up for a tilting single track vehicle, and may have undesirable characteristics when used with a sidecar.