It came with a 120/70-ZR17 front tire and a 180/55-ZR17 rear tire. Stopping was achieved via Dual hydraulic discs in the front and a Single hydraulic disc in the rear. The front suspension was a Cartridge-type, coil spring, fully adjustable spring preload, rebound and compression damping while the rear was equipped with a Link-type, gas/oil damped, fully adjustable spring preload, compression and rebound damping. The wheelbase was 55.12 inches (1400 mm) long. 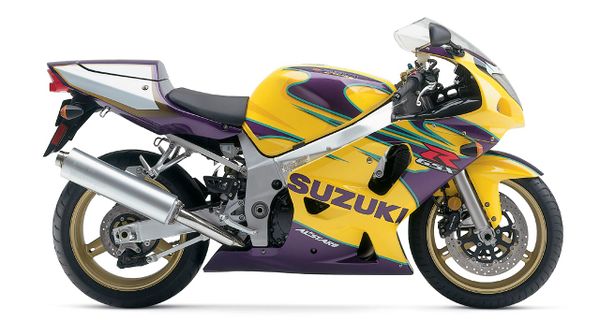 The 2003 MY Special Edition of the GSX-R600 celebrates Suzuki having won the 2002 AMA 600 Supersport title, and its livery is inspired from the Suzuki Alstare World SuperSport color scheme. You will basically spend your money on a bike which is identical (on the tech side) with the current model year, but which will proudly show off the yellow and purple livery with its green pinstripes and the golden rims.

As for the rest, you're in for top-notch WSS-derived performance, with 115 hp and a new ECU with revised mapping and better processing power.

The 2008 Suzuki GSX-R600 gets a new look with more effective aerodynamics and a new fairing with three horizontally-mounted halogen headlights. Main beam uses all three lights, with a position lamp above the main headlight to keep the traditional vertically-stacked look of the Suzuki GSX-R-600. They sit above the central two ram-air intakes in a fairing which is wider at the handlebars to reduce turbulence. Theres also a larger 17-litre tank to provide fuel for the 16,000rpm redline engine, which features three engine maps selectable on-the-fly, like the Suzuki GSX-R1000. It also has a new Suzuki fuel injection system, and is housed in an aluminum-alloy frame, with a new rear subframe which saves 125 grams. There are fully-adjustable Showa forks and rear shock, 14-position adjustable footpegs, an electronic steering damper which reacts to the speed of the motorcycle, and a seat height of 810mm. Lighter alloy wheels are the same dimensions as the previous Suzuki GSX-R600, but save 430 grams between them. The front brakes are dual radial-mount opposed Tokico front calipers with 310mm discs. The single-piston rear Tokico caliper works with a 220mm disc.

Review When I think of Suzuki motorcycles the first two models that instantly come to my mind are the GSX-R and SV-class motorcycles. Both are extremely capable and popular motorcycles in their respective classes, performing well on both the street and track. I have owned a healthy number of GSX-Rs and have spoken with many happy SV owners at many a track and local bike nights.

One motorcycle in the Suzuki line-up that never really gave me that warm fuzzy feeling, however, was the Katana. The Katana was Suzuki's answer for an inexpensive entry level motorcycle with sportbike looks and sport-touring comfort. While I am sure there are plenty of happy Katana owners out there, the somewhat alien-looking styling of the bike has always turned me off.

Well, for 2008 the Katana has received the axe to make room for the all new 2008 GSX650F. The new Suzuki is purpose built as a low-cost middleweight for the novice rider or the economical commuter looking for a comfortable ride with a sporty design. The GSX650F is based off the European Bandit 650 naked bike. It's an inline-Four with minimal upgrades from the Bandit such as full fairing, remapping for more revs and suspension which has been slightly tweaked.

A first glance of the blue and white GSX650F revealed the classic color combination and appearance of its close family relative, the GSX-R. It's no coincidence the front fairing shares a strong resemblance to the previous generation GSX-R600 and 750s. While it will not be mistaken for an exotic Italian bike, the GSX650F has clean sporty lines in a design that is a big improvement over the Katana models.

The GSX650F features an attractive and easy-to-read instrument cluster with tachometer, dual tripmeters, reserve tripmeter, clock, fuel gauge, and a useful gear-position indicator. Moving around on the Suzuki is easy with a roomy cockpit, comfortable one-piece seat with a low seat height and a well-positioned, rubber-mounted, tubular handlebar.

The Suzuki's full fairing design wrapped around a double cradle steel frame will have you thinking GSX-R thanks to the sport-oriented design. Geometry numbers are 26 degrees of rake and 4.25 inches of trail, with a 57.9-inch wheelbase. The fork is a 41mm Kayaba unit with adjustment for preload only. The rear shock comes equipped with adjustment for both rebound and preload. Heading out on the open road? The 5.0 gallon gas tank should allow you enough capacity to bust a few bugs before having to refill.

Taking the Suzuki out for its first excursion I was really looking forward to a day in the saddle that wasn't going to have me walking like a cripple when I returned with knees and back aching. The layout of the GSX650F suited me nicely with an easy reach to the bars and a relaxing bend at the knees. The riding position was well suited to both cruising and aggressive riding when the road gets a little twisted. Wind protection was decent and there was a good deal of room to tuck in if needed.

'The GSX650F motor has all the necessary ingredients to deliver an entertaining ride...'

The GSX650F fires up easily and runs smooth without unnecessary vibration. Spin the flexible motor up and it does a great job of putting the power down where you will likely be spending most of your time, in the low- and mid-range. Chasing through traffic full of stop signs and motorists, I really came to enjoy the motor which was well-suited to this type of riding. The short first gear on the GSX650F was a nice change from the supersport bikes which come equipped with gearing more suited for the track than stop-and-go traffic. Just dump the clutch and start clicking through the 6-speed transmission without worry, the GSX650F surges forward without a hiccup. An effortless clutch pull and smooth-shifting transmission made city traffic a breeze. With no under-tail exhaust or excessive engine heat pouring out at the legs, the Suzuki was quite bearable if traffic came to a stop for any amount of time.

There is no berserk rush to the power delivery but it won't put you to sleep either. Redline is at 12,500 rpm but it likes to be run in the 4,000-8,000 rpm range where it sings nicely in the power curve. The GSX650F motor has all the necessary ingredients to deliver an entertaining ride to anyone in the market for an inexpensive sporty ride in the middleweight class. If you are in the mood for utter madness, however, this motor will probably not suit your primal likings as the Suzuki pumps out the ponies in a pretty civilized manner.

Overall handling on the Suzuki was quite balanced and agile. It turns in well, sticks to a line, and can be gassed hard out of a turn. While not being the most sophisticated chassis, the GSX650F isn't going to do anything to get you in trouble. That is, of course, if you don't push it far beyond its limits.

I tried to do just that to see where its breaking point was. I saw my opportunity in the form of two rapidly approaching GSX-R1000s in my mirror with some young aggressive riders at the controls. What better way to see how the GSX650F would fare against some much more advanced hardware. As I let the young bucks come by, they took a quick glance, surely with fear in their eyes as they observed my proper upright riding position and the very intimidating backpack carrying my camera. I decided to tag along the rear as we hit a twisty section of road. As it turned out, the little Suzuki didn't fair too bad, staying right with my two test subjects quite easily until we hit some open road where the bigger bikes could flex their muscle. Soon I was a mere speck in the mirror as Suzuki's natural pecking order took over and the GSX650F was shuffled to the back.

Overall handling on the Suzuki was quite balanced and agile. It turns in well, sticks to a line, and can be gassed hard out of a turn.'

The GSX650F is quite composed, and its 475-pound claimed dry weight transitioned nicely at a moderate pace. The wide handlebar does a good job of giving you the proper leverage to position the bike into the apex. While it is quite balanced and agile, it might not be your favorite track-day weapon. At more serious speeds while pushing the bike, the front end seemed to have a touch more trouble staying composed, becoming quite uneasy and a little on the springy side. The rear seemed to be doing a good job keeping the back end in line, but I was easily able to find the limits of the front fork with a good amount of flex and some quivering at the bars. You could tie the GSX650F into a bit of a knot if you really wanted to get aggressive with transitions, throwing the bike hard on it's side or really doing some late braking.

Speaking of brakes, while not the strongest I've ever put my hands on, they do have good feel and more than capable stopping power. The GSX650F comes equipped with Tokico 4-piston front brake calipers and 310mm brake rotors combined with a lightweight single-piston rear caliper and a 240mm rear brake disc.

Keeping the rubber side down were Bridgestone Battlax BT-011s up front and BT-020s in the rear, with a 120/70 ZR17 and 160/60 ZR17 front/rear tire combo. These tires worked excellent in many different conditions. My two weeks with the bike were filled with a generous amount of wet-weather riding on the GSX650F, and the Bridgestones gave me good confidence in the rain, enough to ride a few wheelies in a slight drizzle for some photo opportunities. In the dry conditions they were equally up to par, providing good traction both front and rear.

I have found that some people tend to think that because I race motorcycles I am a total speed-crazed adrenaline junkie always looking to run off with the neighbor's daughter. While the latter may be true and it may not be a bad idea to keep the daughters locked up, I actually do enjoy a restrained leisurely ride on a motorcycle that is composed at street speeds and not excruciating on the body. In fact I found that the GSX650F was really starting to grow on me over the two weeks. Constant commuting in the rain had me quite happy that I was riding a motorcycle with a mild temperament and a chassis I could trust.

While the limits of the GSX650F's capabilities can be reached quite easily by an experienced rider, I was not turned off by the Suzuki. Instead, I grew to appreciate the many qualities the GSX650F possesses. This is no one-trick pony. In fact it's an extremely versatile motorcycle. Whether you are into sport riding, touring or everyday commuting, the GSX650F has the ability to do it all. At an MSRP of $6.999 this will surely be an attractive option for the budget-conscious rider or someone looking for that first bike that gets it all started. Source