Suzuki OR50 Rebel, the little custom styled motorcycle made by Suzuki with the mechanics from the ZR50/X1, was exported from Japan from 1979 to 1980. The model came to the market already 1977 for its home market, as a 1978 year's model.

In Japan the model was called Mame-Tan 50 Custom (some sources call it OR50 Custom). The first model had wire wheels, drum brakes and fiberglass fenders. As an option you could choose a paintjob with flames painted on the fuel tank. I believe the tachometer and the the front disc brake were options. I haven't managed to find any sales brochures of the first year's model to confirm this. 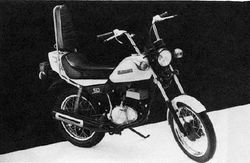 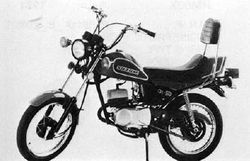