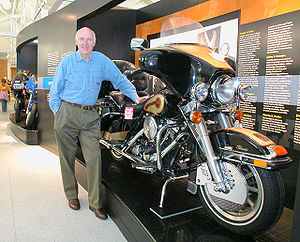 A key figure in Harley-Davidson's turnaround in the 1980s, and manager in Milwaukee for AMF from 1975. Beals knew nothing about motorcycles (at least at first) but was a highly experienced and competent manager. One of his first actions was the so-called Pinehurst Meeting. Until then, Harley-Davidson had no long-term strategic plan, so Beals took all the senior managers up to Pinehurst, North Carolina for a week. At the intensive brain-storming session, it was agreed that Harley-Davidson urgently needed more modern, better-quality hikes to compete with the Japanese. and a ten-year product plan was drawn up. First, the existing V-twin was to be updated (which eventually saw light of day as the Evolution V-twin in 1983). Second. a whole range of all-new water-cooled engines would be developed, the NOVA program. Far from being an AMF placeman, it was Beals who originally proposed that Harley-Davidson senior management buy the company back from AMF, and it was he who negotiated the deal. As chairman of the newly-independent Harley-Davidson, he oversaw the huge changes in production through the 1980s which enabled the company to survive, putting quality first, with employee involvement and just-in-time methods.