The engine was a liquid cooled in-line four, four-stroke. A 72.0mm bore x 46.0mm stroke result in a displacement of just 749.0 cubic centimeters. Fuel was supplied via a double overhead cams/twin cam (dohc). The engine featured a 11.2:1 compression ratio. 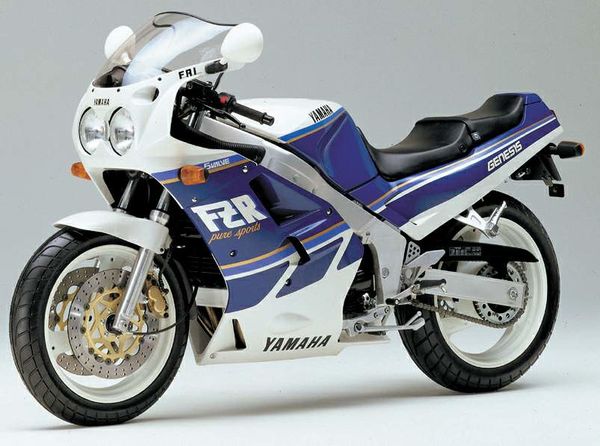 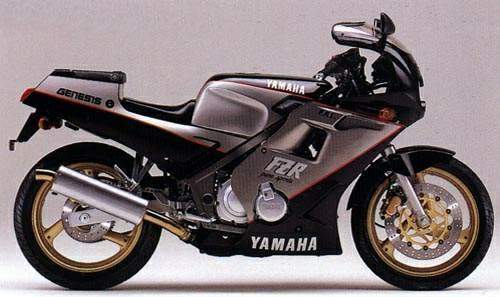 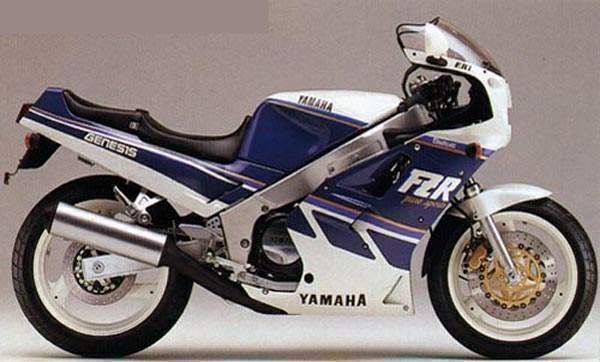 With the introduction of the 1987 models, though, particularly the new FZR Yamahas, we're beginning to see two elemental yet heretofore disparate motorcycling structureschassis and enginescome together in a technical harmony and balance the sport hasn't seen since the Norton featherbed.

Not that Yamaha has a corner on the technological market by any means. Honda with its CBR fours, however, appears to be exploring the aerodynamic route to speed while the bikes make do with steel perimeter chassis. Suzuki's and Kawasaki's aluminum street chassis don't yet reflect the current spar-design thinking which is winning on the Grand Prix circuit, and while the oil-cooled Suzuki engines push the light bikes to respectable speeds, the engines themselves aren't powerhouses. No, out of the few 1987 models the Japanese let the press peek at, our vote for the most homogenized mixture of current-think parts goes to Yamaha. A collection of high-tech bits does not guarantee a great bike, yet this assemblage seems to represent the future, now. What are we looking at?

Clearly, two performance innovations combined: Yamaha's use of a five-valve-per-cylinder head on the FZR bikes, set for the first time in the company's race-bred Deltabox aluminum chassis. Because the sum of these innovations has such import, it's helpful to evaluate the parts separately, winnowing the misconceptions from the truth. First, the cylinder head Yamaha developed its novel five-valve technology for specific gains. First on the list was a compact, nearly flat combustion chamber of minimum surface area. In a two-valve design, adequate valve area comes only by tilting the valves away from each other and making the head somewhat hemispherical, but with five valves the poppets can set into an almost flat chamber. The Yamaha's head is only slightly domed, its piston slightly concave. The resulting lens-shaped chamber concentrates the charge tightly around the central spark plug, and this means most of the charge is quickly inflamed shortly after the spark. The resulting short total combustion time cuts energy loss through heat to the cooler metal of the piston and head, and that saved energy is applied to the job of pushing the pistons down. Being nearly flat, both piston and head offer minimum surface area, and this further cuts combustion heat loss, again translated into power gains. Detonationengine knocksets the upper limit on compression ratio, but the five-valve's rapid combustion can consume the charge before detonation has time to occur, permitting an unusually high compression ratio of 11.2:1 (Honda's VFR750 is good for 10.5:1, Suzuki's GSX-R750 10.6:1). This not only gives the Yamaha 750 and 1000 more punch across the powerband, it also increases fuel economy.

The following year the upper rails grew again, the lower members shrinking correspondingly. Yamaha repeated the process each succeeding year: the current Yamaha YZR500 road racer's chassis is a delta-shaped twin boxbeam, made as deep as the steering head and as wide as it must be to clear the engine. It extends almost straight from head to swing-arm pivot, and is made largely from special weldable aluminum sheet about two millimeters thick. Almost without exception, previous designs have carried steering-head bearings in the ends of a piece of tubingthe steering head properand have joined the rest of the structure not to the bearing area, but to the head tube, relatively far from the bearings. This sacrifices strength by cantilevering the bearings out in space above and below the points at which chassis loads are fed in. Yamaha put top and bottom bearings into pieces of plate which extend rearward into the box structure, directly carrying head-bearing loads into the frame. A tube separates the bearing pair, but it is no longer loaded in bending. At the rear, plates at the side pick up the rear fork pivot pin and the footpeg carriers. Between the steering head and swing-arm pivot, the twin beams are gracefully shaped, cross-members blended into them in organic-looking fashion. Although the original OW61 used extruded frame tubes, Yamaha's present racing chassis are fabricated from machined shapes and from special-purpose pressings in sheet aluminum. Why do they last when frames before them cracked? Using the longest possible welds cuts down the load per inch of bead. In the Deltabox, the welds have the same dimensions as the frame itself, and because the frame is largely continuous pressings, there is a bare minimum of welds in the first place. The resulting structure probably has about five times the torsional and bending stiffness of previous multi-tube designs. In the new FZR Yamahas, we now have a Deltabox design for the street, significant because this signifies the Deltabox design has passed rigorous vibration, drop, and longevity testing. As in the competitors' aluminum chassis, Yamaha uses high-quality castings for the steering-head and swing-arm structures, a cost-cutting move. Castings have poor fatigue properties as compared with wrought materials (rolled or extruded mill forms) because traditionally most castings are full of voids or impurities, both of which invite crack growth under stress cycling. On the other hand, castings lend themselves to high-volume production where machining from solid stock does not. There is an answer, though. Traditional die-casting fills the die by gravity flow, and dissolved gases in the metal pass out of solution during solidification to form voids. Vacuum casting fills the die by drawing the metal up from below: as the liquid emerges into the mold, the low pressure there causes evolution of the gases in much the same manner as uncapping a bottle of soda. The result is a casting with greatly improved fatigue properties. Another approach is Hot Isostatic Pressing (HIP), which submerges castings in a hot, high-pressure (15,000 - 30,000 psi) bath, in effect forging the part from all directions, closing the voids, and therefore reducing the population of crack nucleation sites. The formed-aluminum sections of a Deltabox chassis, pressed in the same fashion as auto body parts, already lend themselves well to quantity production with no sacrifice in strength. Welding aluminum is tricky. Any welding process is really a continuous casting in which the molten weld puddle freezes behind the moving torch arc. Just as the freezing of sea water yields fresh-water ice and a slush of concentrated salt water, the freezing of the weld puddle has some tendency to produce a weld area of purified aluminum with a zone of concentrated impurities and alloying elements down its centerline. Aluminum expands far faster than steel; after welding its cooling contractions may tear the bead apart, particularly in that sensitive, impurity-rich centerline zone. Welds made with "high restraint"on parts jigged so firmly they cannot move easily during coolingare especially subject to cracking in this fashion. Taking care in the design not only of the chassis but of how its welds are sequenced can make the difference between cracking and not cracking. Yamaha uses robots to weld their aluminum frames, and began using robot welders in 1974. The trend in robotics in the U.S. is toward many-jointed arms that mimic human function; in Japan robots now tend to be specialized for particular jobs. Yamaha builds its own robots for about half the cost of commercially available machines, and in a typical operation, several machines work with one or more human "stagers." The stager picks up frame elements and locates them accurately into a fixture on .a rotary tablesuch fixturing is very difficult for robots, but easy for humans. The table indexes 180 degrees, carrying the fixtured part into the operating envelope of the robots. A glare curtain sweeps across, protecting the worker's eyes from the ultraviolet light as the welding begins, often performed by more than one robot simultaneously. The worker removes the just-completed part and fixtures another. He may also complete welds in areas difficult for the machines to reach. Why robots? Can you repeatedly place an arc source to within 0.004 inch anywhere in space, eight hours a day, Monday-morning hangover or no? What can Yamahaor any other manufacturer for that matterdo for an encore? The latest FZRs still look a step behind in the aerodynamic fight: maybe slicker bodywork for '88. Or how about a reliable, responsive fuel-injection system? And aluminum isn't the only stuff to make frames from: a carbon-fiber chassis? A ceramic cylinder block? When will center-hub steering come of two-wheeled age? Yamaha's five-valve engines and Deltabox chassis are but a momentary stay against the unending rush of technology, but together they represent a canny balance between performance and handling, between technology and rider ability. The featherbed Nortons did the same, and we remember and revere such machines even today. Will these new Yamahas be worthy of such immortality? We'll all soon know Source Cycle Magazine