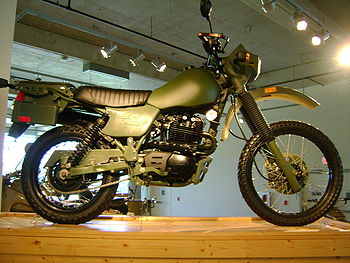 Originally designed and produced by the British manufacturer CCM Armstrong for military use world wide, Harley-Davidson also built these motorcycles in York, PA. under license. Harley-Davidson bought the design and manufacturing rights to it in October 1987, in an attempt to broaden its product base. The power unit is a single cylinder Rotax engine from Austria, the same motor commonly used in dirt-track racing in the U.S. With the insistence that all military vehicles must use diesel fuel, gasoline powered motorcycles were now obsolete. The U.S. Marines now use Kawasaki KLR650s that are converted to run on diesel fuel.