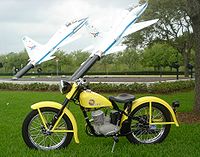 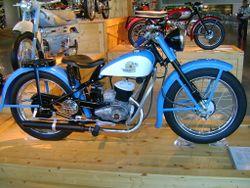 The ST165 was a lightweight two-stroke Harley-Davidson produced from 1948 to 1966. The design was a copy of the DKW RT125, acquired at the end of World War II from the occupied German DKW plant. With the introduction of these lightweights it was hoped they would bring younger buyers into a Harley dealership, hopefully moving up to one of the full size models at a later date. The ST165 was priced at a reasonable $445.00

Sometime in 1955 after earning a regular income as a performing artist Elvis purchased his first Harley-Davidson. It was a small 1956 Harley-Davidson ST 165 (#56ST1603), basically an entry level motorcycle which he likely used to learn to ride. It was a 165cc motorcycle sometimes incorrectly referred to as a Harley Hummer. Technically speaking , the true "Harley Hummer" was only produced from 1955 until 1959, and it was a very basic, stripped down, no frills, 125cc motorcycle. By January of 1956 he had outgrown it and was ready to move up to the Harley-Davidson KH.