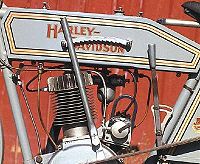 First introduced in 1912 the Harley-Davidson X8A was a huge improvement over Harley's previous motorcycles which were little more than bicycles with engines.

The X8A was powered by a 30-cubic inch single producing 4.3 horsepower. It had a hand-operated oil pump that served to augment the existing gravity-feed system. A magneto ignition was used for easier starting. This model also featured a sort of clutch, one of the industries first, called the "Free Wheel Control". The feature was supposed to allow smooth takeoffs from a standing start.

Harley also worked on improving the bike's comfort. The traditional leading-link front fork was joined with a new "Full Floating" saddle in which a set of coil springs supported the seat. This was as good as Harley's rear "suspension" would get for another 45 years.