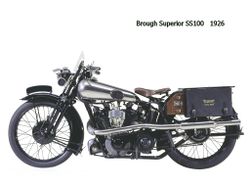 George Brough named his bikes Brough Superior to the displeasure of his motorcycle engineer father William Brough, thereby relegating William's bikes to be henceforth known as Inferior. George used his own frames and bought engines and various other parts to produce exciting, exclusive, and expensive bikes.

The source of the Father-Son disagree was concerning cylinder angles. W.E. Brough had become an advocate of the flat twin, adopting ABC engines for his motorcycles before moving on to the production of his own engines retaining the configuration with capacities of 496cc to 810cc, a move that George did not support and which prompted the production of some of the most iconic motorcycles ever produced.

George's bikes did prove to be superior and not just against his father's bikes. In the 1920s and 1930s George racked wins and records. Located in Nottingham, England the firm was thought to produce some of the best bikes in the world. The Motor Cycle claimed they were essentially "the Rolls Royce of motorcycles", and Brough used this quote as a slogan in advertising - Rolls didn't object.

George was well known as a competitor in motorcycle racing, highly regarded as a technician and understood the value of marketing. He successfully utilized all of these talents in elevating his machines to being objects of desire, items that did more than simply provide transport.

His flair for marketing, permission was sought and secured from the illustrious carmaker to describe his machines as "The Rolls Royce of Motorcycles", combined with his insistence that only the best components were used in the creation of the motorcycles bearing the Brough Superior script and that they were then assembled with a level of care and precision beyond that of other manufacturers ensured that the motorcycles leaving his premises were more than the sum of their parts. His competition background resulted in machines that handled and went as well as they looked, whilst the "bespoke" nature of the machines ( although a catalogue was published the machines therein represented a starting point for the would be owner, in 1930 the range consisted of the 680, SS80 and SS100, which would then be tailored to your specific requirements) attracted a clientele that included the "a" list celebrities of the day.

For the 1930 season, when the example offered was built, the SS80 represented the middle machine in the range, for those with deep enough pockets there was the overhead valve SS100, whilst the more impecunious would look to the pretty, but slightly small (in George Brough's eyes) 670. Those seeking a machine that balanced performance and stamina would opt for the SS80. All three machines utilised JAP powerplants, however, the SS80 (so named because 80 mph was guaranteed to be attained by the machine by the manufacturer) employed a side valve engine instead of the over head valve units fitted to its larger and smaller siblings. The 981cc vee twin transmitted the power to the rear wheel via a three speed gearbox, in the case of the machine offered a Sturmey unit , fitted with high gears and a chain final drive.