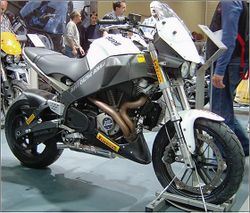 A racing version of the Buell Ulysses XB12X

Buell's XB12X Ulysses debuted in July 2005. It offers seating, ergonomics, and long-travel suspension that are well-suited for use on unpaved and rough (fire)roads. Buell advertised the Ulysses as "the world's first adventure sportbike." For 2008, among other changes, XBRR oil pump and ignition timing systems have been changed tapping into the XBRR race bike as well as the addition of heated grips and increased turning fork swing from 54° to 74°. The Ulysses XB12XT differs from the XB12X Ulysses in several areas. It has a different front fender, unlike the Enduro-front fender that comes on the X and lower fork protection is not as pronounced as on the X, due to the intended purpose of the XT which is more street than dirt oriented. Other major differences include the suspension which is completely different between the two bikes, being about an inch lower on the XT and tuned more for street riding, vs. the X's slightly taller and softer suspension better tuned for dirt use. Along with factory Hepco and Becker hard saddlebags and top box, tall windshield and a 30.9" seat height, the XT also has wheels that are approximately 1lb lighter than those found on the X, which have added mass to make them stronger for off paved road use.[2] The XB12XP is a police model that was available for the 2009 model year. 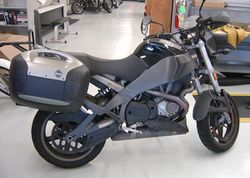 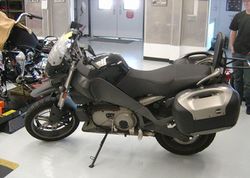