The engine was a liquid cooled single cylinder, two-stroke. A 52.5mm bore x 45.8mm stroke result in a displacement of just 99.0 cubic centimeters.

The bike has a 6-speed transmission. Power was moderated via the Wet Multi-disc.

It came with a 70/100-19 front tire and a 90/100-16 rear tire. Stopping was achieved via single disc in the front and a single disc in the rear. The front suspension was a 36mm inverted telescopic cartridge fork with 18-way compression damping while the rear was equipped with a uni-trak single shock system with 4-way compression and 18-way rebound damping plus adjustable spring preload. The KX100 was fitted with a 1.32 Gallon (5.00 Liters) fuel tank. The bike weighed just 149.91 pounds (68.0 Kg). The wheelbase was 51.61 inches (1311 mm) long. 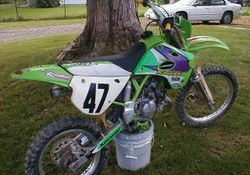 It has a responsive air-cooled 100cc four-stroke single, so the KX 100 pumps out plenty of power for off-road fun. The engine is specially tuned for low and mid-range power.

If one is ready to advance from the smaller KX85 to the full-size Lites competition, the 2012 MY Kawasaki KX100 is a good option to fill in the gap between these categories.

Featuring a liquid-cooled, 99cc, two-stroke engine, it offers just enough muscle for one to make the transition between classes. And with its six-speed transmission, one may be confident that there is a gear for any situation that might occur.

And last but not least, the Uni-Trak rear suspension plus the 36 mm inverted cartridge fork ensure that no matter how steep the gradient, or how difficult the obstacle may be, the KX100 will always get the rider to the finish line. 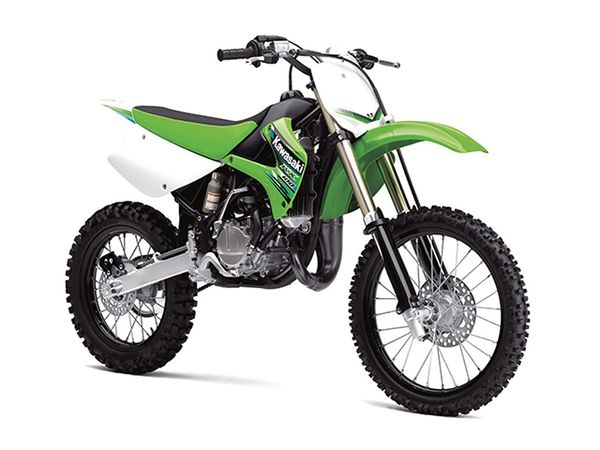 The new 2013 MY Kawasaki KX100 helps young racers make the transition from the mini categories to the full-sized ones, combining elements from the smaller KX85 and the much bigger and harder to handle KX250.

The liquid-cooled 99cc two-stroke engine, helped by the Kawasaki Integrated Power Valve System (KIPS) makes sure that enough torque and horsepower are delivered at all rpm, ensuring effortless passage over coarser sectors of the track or trail.

The high-tensile steel perimeter frame has been designed with wide footpegs for increased rider control and foot support. Even the fuel tank has been mounted low in the frame, lowering the center of gravity and thus enhancing the stability of this small two-wheeler.

The 2014 MY Kawasaki KX100 comes with a brand new two-stroke 99cc engine. Redesigned parts of it, like the cylinder head gasket, the piston, the Nikasil-coated cylinder, the larger outer diameter crankshaft and the resin block added to the crankshaft mean a 17% increase in high-rev power.

Independent valves for each port of the KIPS system replace the older three-piece design, leading to a more reliable valve system that requires less maintenance.

Comfort has also been improved by redesigning the fuel tank with a flatter top area and moving the tank cap 20mm lower.

The 2015 MY Kawasaki KX100 sports the same two-stroke 99cc engine found in its predecessors. Some of the most interesting features found on the KX100 are the Kawasaki Integrated Power-valve system that increases the mid-range torque and top-end power.

The 28mm Keihin PWK carburetor provides ideal fuel atomization, which leads to quicker throttle response and an overall smoother power delivery. The Uni-Trak rear suspension system ensures smooth response over a wide variety of scenarios one may encounter on the dirt

The Kawasaki KX100 model is equipped with the Kawasaki Integrated Power-valve System (KIPS) delivers instant power with the aid of the 99cc two stroke supermini. The adjustable rear and front suspension allow you to choose the setting in the 20 way compression damping and travel among other settings.