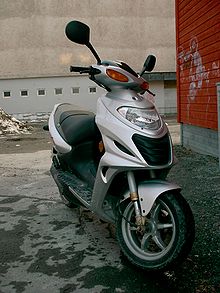 This article is about the scooter, for the 1980s motorcycle, see Suzuki Katana

The Suzuki Katana AY50 is a 50 cm3 scooter produced by Suzuki and sold primarily in Europe starting in 1997. It is named for the katana samurai sword, as well as the early 1980s motorcycle of the same name.

The designation "AY" indicates that it has a two-stroke engine (A) and that it is intended for use in urban areas (Y), see Suzuki motorcycle naming conventions.

Some of the parts used on the Katana are clearly inspired by racing, like the carbon-look Magneti-Marelli instruments and the Showa upside-down front suspension. A helmet can be stored in a space below the seat.

The powerplant of the Katana is a two-stroke engine with a displacement of 49 cubic centimetres producing 2.43 kW. Being just below 50 cm3, it is regarded as a moped in most countries. In addition to the air-cooled AY50, a liquid-cooled version designated the AY50R is produced.

The engine of the AY50 is also used in the Suzuki Estilete UF50 and Zillion UX50.

As with most popular scooters and mopeds, many aftermarket modifications and replacement parts to increase acceleration and top speed exist. However, tuning of 50 cm3 vehicles is illegal in most countries.