The bike has a Wide-ratio 5-speed transmission. Power was moderated via the Wet multi-disc, manual, hydraulic. 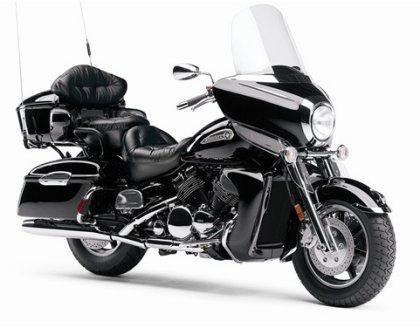 The Midnight version of the 2002 Yamaha Royal Star Venture takes touring and cross-country luxury one step further, with studded seat and backrest, liberal use of chrome. Add in the cast wheels shod with beefy tires, wrapped by deeply valanced fenders, all bearing the shiny mark of the classic chrome, and the onyx luster of the paintwork, matching the black accented engine for an even more powerful look.

The 1294cc V4 sits at the heart of the bike, and the proven platform of the base Venture ensures an exhilarating ride, be it solo or with a passenger, fully-loaded trunks and speeding across the state line. 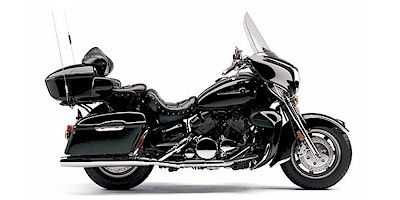 The 2003 Royal Star Midnight Venture brings luxurious Onyx black lacquer in combination with liberal use of shiny chromed out parts and accents. To make things look even more spectacular, the beefy V4 engine also got a coat of sober black paint, beautifully contrasting with the shiny covers. Studded leather seats, a generous windshield, passenger and rider floorboards, plenty of other touring accessories usually supplied as optional items are bolted to the 2003 Royal Star Midnight Venture as standard equipment. This bike packs the traditional Royal Star class and adds extra, rich touches for an even stronger head-turning factor. 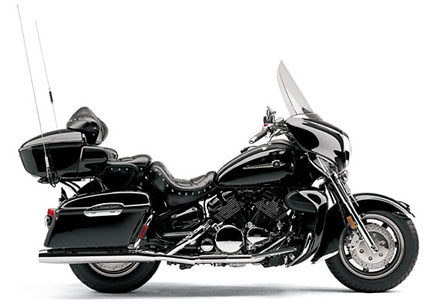 The 2005 Royal Star Midnight Venture shows that even one of Yamaha coolest bikes can indeed become even neater when presented in the mighty Midnight livery. Sober black glossy paint covers almost the entire bike, from the tank to minute details such as bolts and nuts, with only several parts being allowed to show off the chrome luster.

The ultimate classic touring machine in Star's line-up, the Royal Star Midnight Venture packs all the nifty features you could ever desire in such a machine and then some more, with even more optional items readily available.

The 2006 Royal Star Midnight Venture maintains the darkened, glossy black livery of the previous model year, but Star decided to drop the studs on the seats and passenger backrest, for a more sober attire for this bike.

On the tech side, the Midnight is identical to the stock Venture, with the same beastly V4 engine with power and torque on tap, smooth 5-speed transmission and premium comfort in terms of both occupant comfort and weather protection. Add in the generous on-board storage and prepare to hit the road, wherever it may lead.