A touring motorcycle is a type of motorcycle designed for long-distance touring and heavy commuting. Although any motorcycle can be used to tour with, manufacturers have brought specific models designed to address the particular needs of these riders. Common to the touring motorcycle models is usually large displacement fairings and windshields (to offer a high degree of weather and wind protection), large capacity fuel tanks (for long ranges between fill-ups), engines offering lots of low-end horsepower, and a more relaxed, more upright seating position than sport bikes. These motorcycles can be further subdivided into multiple sub-categories, which are commonly used terms within the motorcycle industry. 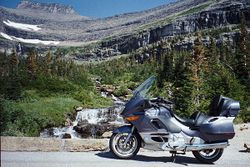 Full-Dress touring motorcycles are generally characterized by extremely large fairings and ample bodywork compared to other forms of tourers, the integration of hard luggage into the design of the motorcycle (often including both saddlebags and a top-mounted box), very large displacement, torque-rich engines, and a very upright, comfortable riding position. Additionally, standard and optional amenities on full-dress tourers often include equipment not normally offered on other motorcycles, such as complete stereos (AM/FM radios with CD players or MP3 connections are standard, and now satellite radio is becoming increasingly common), heated seats and hand-grips, GPS navigation systems, selective venting, power windshields, and, for certain models in certain model-years, such oddities as integrated air compressors, and air bags. Full-dress tourers are designed specifically for riding on pavement, although they may be taken onto hard, compacted dirt roads; they are specifically not designed for off-road duties. Common current examples of full-dress tourers include the Yamaha Royal Star Venture, the Honda Goldwing, the BMW K 1200 LT, and the Harley-Davidson Electra Glide, all of which have become quite popular. Also, Victory Motorcycles recently introduced its new, controversially styled model, the Vision Tour.

This category encompasses motorcycles designed specifically to provide global touring capabilities on both pavement and off-road with the intent of making virtually any destination reachable. Motorcycles in this category share a unique combination of traits that provide them very high ground clearance (for off-road purposes); particularly large fuel reserves; large displacement understressed engines for high reliability and heavy torque output; large size; and good high-speed highway behavior and handling. This combination of traits (along with their weight) is also what separates them from traditional off-road, Enduro, and MX class motorcycles. 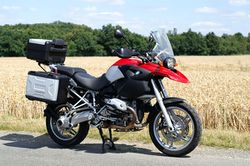 It is common for a large selection of purpose-driven options to be available for global tourers, including skid plates (to protect the engine and transmission during off-road use), larger and additional fuel tanks than stock, metal-formed hard luggage for extreme condition use, hardened GPS navigation systems designed to handle off-road abuse, etc. These bikes do not necessarily ship with hard luggage, but usually offer them as optional extras either from the manufacturer or via third-party suppliers. These motorcycles are often used as the basis for competitions in extreme rally events, including the grueling Dakar Rally.

Noteworthy current examples include the BMW F650GS, F800GS and R1200GS; the KTM 950 and 990 Adventure series; the Suzuki DL1000 and DL650 V-Strom; and the Kawasaki KLR650. In recent years, other manufacturers have also introduced models with some off-road ability like the Buell Ulysses and the Triumph Tiger, although from 2007 the Tiger is much more road oriented.

Sport tourers are a hybrid form between sport bikes and tourers, allowing long-distance riding at higher speeds but with more emphasis on sport-like performance (in both handling and speed) than standard tourers. These bikes offer a middle ground between both segments. The paradigm arguably originated with the 1976 BMW R 100 RS, which combined BMW's traditional strengths in touring with a full-coverage racing fairing that surrounded clip on-like handlebars, and featured a semi-crouched riding position. The sport touring category includes such motorcycles as the Honda VFR (Interceptor) and ST series; the Yamaha FJR1300; the Triumph Sprint and Sprint ST; Ducati ST series; the Moto Guzzi Norge; the Suzuki Katana; the Kawasaki Concours 14 (1400GTR); as well as many BMW GT, ST, and RT models. These bikes sometimes ship with hard luggage, but or manufacturers offer them as optional extras either from the manufacturer or via third-party suppliers.