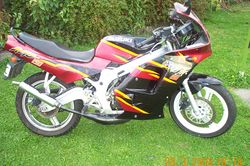 The Suzuki RG150 was a 148 cc two-stroke road motorbike produced by Suzuki in Thailand.

The bike was produced from 1998 until 2000. In 1998, it was selected as the 2nd best new motorcycle of 1998 by Motor Trend. magazine. It was produced almost exclusively for Thailand although around 100 were exported to New Zealand. The frame was made of box cut steel and had a banana-shaped rear swingarm. It had a single mono shock on the rear with a single disk brake. The front suspension was a traditional telescopic fork also with a single disk brake. The wheels were tri-spoke eniki mag type wheels. The engine was a single cylinder water-cooled two-stroke engine. It had a six-speed close ratio gearbox with a kickstart. The engine featured AETC (Automatic Exhaust Timing Control), basically a valve in the exhaust port of the engine. At low RPM it restricted the exhaust gases so the engine produced more torque, at high RPM (approx 7800 RPM) it opened up to increase top RPM power. The engine also had an expansion chamber to give better top-end power. Maximum power was 36 hp (27 kW) and top speed was 180 km/h, top speed was limited to 180 km/h due to the gearing allowing the motor to hit the rev limiter in top gear. The bike featured a full fairing which was unusual for such a small bike. Also available at the time the RG150 was produced was the RGV150 which was a cheaper version with an air-cooled engine and spoke wheels which only had a disk brake on the front. Suzuki FXR150 replaced the RG150 and RGV150.

The European market received the RG125 which is almost identical to the RG150, but with a 123 cc engine of the same design as the RG150. The UK RG125 also had indicators mounted on stalks and the front forks were upside down telescopic.