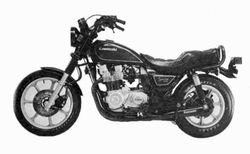 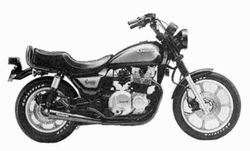 Don't think of it as the After Midnight Special. The Spectre is a pure cheaterbike all on its own.

Despite the obvious pavement-ripping qualities endemic to the mating of a monster motor and a 130/90x16 Dunlop Qualifier rear tire, the Spectre proves its street worth when the engine isn't revving hard. Then, firmly in Main Street mode, you learn to appreciate not only how 1090cc can ma|ie the scenery stretch breathtakingly away when you yank on the go-stick, but how easily it can make the world slide by when a gentler hand is applied. And the Spectre makes it embarrassingly easy to cruise. The engine pulls strongly from 1500 rpm on up, so five easy clicks of the slick gearbox can leave you anywhere from urban trawling speed all the way up to abject foolishness, depending on how hard you twist the throttle. Even sustained riding in high gear at sub-2000-rpm engine speeds won't coax a stumble from the Mikunis, so all you're left with is minding the impet-uousness of your right hand and unobtrusively checking out the reflection in store-front windows. That, and honing your y routine for when you're asked how you ever got the idea for gold engine cases. Besides having its cruise-speed act down pat, the Spectre also is armed for the free-fire zone that on-street parking has become. In addition to the usual fork lock at the ignition switch, the Spectre thwarts unauthorized rapid changes in possession with Kawasaki's exclusive centerstand lock, also conveniently operated by the ignition key. With the centerstand locked in the down position, rollaway thefts are out of the question, and the Spectre's own 553-pound avoirdupois actively discourages carryoffs. If you require still more in the line of anti-theft insurance, Kawasaki offers an additional rider policy in the form of an optional cable lock, which nestles out of the way in a left-side frame member when not in use. So, prowling urban streets or passing time in parking lots the Spectre does handily, but they aren't necessarily what it does best, especially when you consider that beneath the custom livery lies most of the running gear of the 1100A tourer. All of which means that the Spectre is one street cruiser that won't fall on its knees when you reach the city limits. Much of the reason the Spectre doesn't give up the ghost at the prospect of out-of-town riding lies in its suspension adjustability. Like the KZ1100A, the Spectre relies on air-assisted suspension, front and rear, to take the sting out of road jolts. A leading-axle air-spring fork with 38mm stanchion-tube diameter and a balance tube handles the front-end tasks, while nitrogen-filled Kayaba air shocks cushion the rear. The shocks are adjustable to four damping settings, and the air pressure can be changed for both shocks at the equalizer line under the seat. With the suspension bits adjusted to touring-soft, the Spectre does a fair approximation of a full-time luxotourer. Sliding friction at the bearing surfaces in the fork allows some of the jolt of sharp-edged expansion joints to work back to the rider, but it usually reads out as a minor jar, not a relief map of the road surface. And the Spectre's rear end, assisted in part by the flexing of the multi-grade foam in the well-shaped saddle, offers up a comfortable ride. What little vibration there is at highway speeds and faster is a slight tingle through the handlebar, but it isn't even enough to blur the images in the Spectre's tinted mirrors. The handling is twitch-free and suited to low-effort riding for long distances. The only sour note in the Spectre's highway performance comes from its abbreviated exhausts, which churn out a substantial rumble that tires the rider long before the rest of the bike will. All in all, the Spectre offers a fairly convincing argument that street cruising can be state-to-state as well as stoplight-to-stoplight. That same argument can be applied to more spirited riding as well. Heavy inputs aren't required to get the Spectre heeled over to respectable lean angles. And good braking afforded by the triple discs, as welr^P as the engine's ability to pull the Spectre out of turns at high exit speeds, makes^a eight-tenths riding part of the bike's pro-^" gram. Flat-out backroads hauling will point out the Spectre's street-cruiser predilectionsand weightas a slow . wobble in hard cornering, but to label the bike as somehow flawed for any sport riding is to miss the point entirely. All that high-speed roadwork proves is that there are other more-specialized machines more adept atand more adapted tostraightening curves. And the prospective Spectre buyer knows that there are other, faster bikes out there for pure sport ridingat least he should. But what he should also know from the outset that the Spectre forces a decision: You either have to affect a shucks-gosh-darn attitude about accepting misdirected praise for all the well-thought-out custom licks you applied to make your bike ... or you might as well keep on riding. 