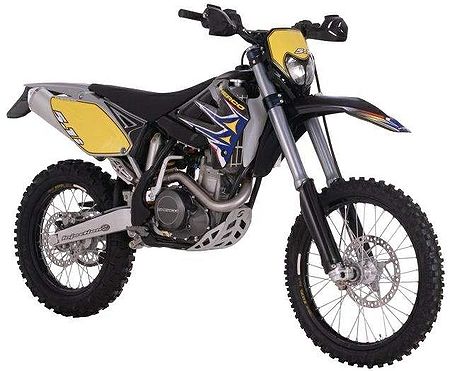 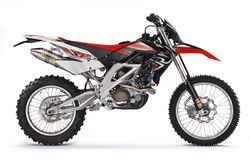 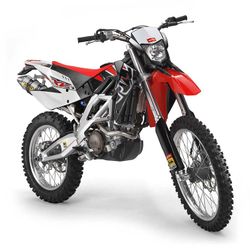 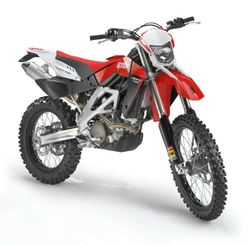 Evolution continues on the most revolutionary off road motorcycle of recent years. The 2007 RXV incorporates a series of improvements destined to confirm its place as an unrivalled competition machine. 2006 was a great year for Aprilia in off-road racing, with the rider’s and manufacturer’s titles in the S2 class of the Supermotard World Championship as well as excellent results in the Enduro World Championship. From computer timings to dirt tracks, from the drawing board to the motard circuit, Aprilia’s off-road teams and their development staff have not only won races in the field, but have invented, developed and tested new solutions to further improve on a machine that was already acknowledged as the perfect ‘rider’s enduro’.

The RXV is back again as living proof of Aprilia’s dedication to transferring competition technology directly to production motorcycles. The RXV (and the SXV) are to all intents and purposes road-going competition bikes. Totally uncompromising, these machines are designed with just one thing in mind. Winning.

Style: It’s the details that count

As with all Aprilia motorcycles, the RXV has been designed with an almost obsessive attention to detail. Its unique design distinguishes it from all other enduros, and also makes it fantastically functional when performance is pushed to the limit, just a winning off-road racer should be.

The 2007 RXV also features new graphics for a more exclusive, racing look. Clinical, decisive lines transmit a sensation of lightness and unbeatable build quality. The design team has worked hard to create a distinctive Aprilia look and feel, and has launched a whole new look in enduro and supermotard motorcycles. Your gaze is inevitably attracted to the superb technology of the RXV in the form of its V twin engine, mixed trellis and aluminum frame, and mighty swingarm. The design of the tail and rear side panels abandons traditional enduro styling and is totally innovative, just like the centrally mounted exhaust system with twin tail pipes under the rear mudguard. In fact, innovative design solutions catch your eye whichever way you look at the RXV. And Aprilia Racing colors confirm that this is a bike that is born to compete. As always with Aprilia, goods looks are just the outward shell of ingenious design solutions. The fixed air guides for example, allow the fuel tank to pivot upwards, giving easy access to the filter box. Everything about the RXV is designed for victory in off-road racing. The quest for perfection has driven the design team to pay close attention to even the smallest details, following input from the champions who have ridden the bike in top level racing. The seat is now lower and more rounded at the edges to enable riders of all statures to get a better grip on the ground, and the brake pedal has been reinforced to resist damage in the event of a fall or a collision with stones or branches. These are just some examples of how race development can cover all possible aspects of a motorcycle.

The amazing V2 engine is the natural centrepiece of the RXV and its sister bike, the SXV. Aprilia was the first manufacturer in the world to believe in the potential of V twin engines in a market segment where nobody has ever had the courage to try. Impressive results in top level racing in 2005 and 2006 have shown that Aprilia was right. This exceptional engine (made entirely by Aprilia) has now been transferred to Aprilia production motorcycles. Totally reliable on the racetrack, the V2 engine has not been deprived of any of its technology or performance by homologation for road use. Engine development also proceeded hand in hand with chassis development from the word go, to ensure that these bikes handle and perform as totally integrated machines. The 77° V angle between the cylinders is the result of innumerable tests aimed at maximising performance and minimising vibrations. The new engine vibrates far less than any single without even requiring a balancer shaft.

The cylinders are integrated in the crankcase and are lined by replaceable wet sleeves. The intelligent design of the V2 has also permitted engine accessories to be arranged in an extremely rational way, keeping the powerplant as compact as possible. The results are amazing: Aprilia’s V twin is one of the most compact in the world, smaller than many singles of similar displacement. Design solutions were specially selected for maximum power and a wide power band. The sophisticated electronic engine management, developed by Aprilia Racing, introduces a number of innovations for this type of motorcycle. The fuel injection system features 38 mm throttle bodies (40 mm on the 550) and is controlled by a programmable ECU. For 2007, the ECU has been given a new, race-developed mapping that improves throttle control and makes power delivery more progressive. The control cams for the throttle butterflies have been given a new profile for the same reason. As a result, the 2007 bike is easier to handle under all conditions, especially on difficult terrain and mud.

Reduced displacement per cylinder has permitted use of an extremely compact and lightweight single-piece crankshaft. The gyroscopic effect of the crank is therefore dramatically reduced. The engine responds instantly to throttle input, making the whole bike faster and more agile.

The same sort of effort has gone into weight reduction. The engine sets a new record for a V twin, even with its starter motor fitted! This has been achieved by an abundant use of super-lightweight prestige materials. The central crankcase sections, for example, are made from aluminum silicon alloy. All covers are in magnesium; the valves are in titanium; and the entire gear train has been made lighter than ever before.

The engine is specially tuned to suit the use of motorcycle. The gear ratios are also precisely calculated for supermotard use in the case of the SXV or enduro use on the RXV. Even the injection and ignition mapping have been modified to give the two engines the right character and performance for the bike; higher revving on the supermotard, smoother and torquier at low to medium revs on the enduro.

Chassis: lighter than ever

An uncompromising machine like the RXV demands a unique and effective chassis. The perimeter frame was developed in conjunction with the engine and features a tubular steel trellis structure, interference fitted to pressed aluminum side plates to form an extremely rigid assembly. The engine also forms an integral part of the chassis, acting as a load-bearing element and contributing to exceptional overall rigidity. For 2007, this frame has lost a further 500 grams in weight to become one of the lightest enduro frames around. The variable section aluminum swingarm is another example of brilliant industrial design. Far more than just an element of style, this is the most rigid swingarm on any motorcycle of this type. Rising rate linkages operate a Sachs multi-adjustable monoshock with piggy-back cylinder and double high/low speed settings. The 2007 RXV has a new suspension setup to improve stability and control over rough ground. A new linkage has also been fitted to make suspension action more progressive and give increased traction and control.

The 45 mm upside down fork is specially calibrated for enduro use. The fork is also fully adjustable, so that you can set up your own suspension action exactly as you want it. The 2007 bike has improved fork calibration designed with the help of Aprilia’s official enduro racing team to improve high speed stability and damping action over stony ground.

The unrivalled technology and performance of the chassis are supported by a fantastic braking system. The RXV boasts Nissin calipers with lightweight wavy discs (270 mm at the front) for unrivalled braking control in even the most challenging conditions. The 240 mm rear disc and single piston caliper provide the perfect balance between stopping power and ease of control Components: ready to race Every single component on the Aprilia RXV is selected for functionality and prestige. To list just a few, the RXV is equipped with:

Compact and ultra-lightweight digital instrumentation for all the information you could possibly need. Variable section aluminum handlebars with no cross bar for perfect elasticity and control. High luminosity LED tail light.

There can be no doubt that the 2007 RXV is more race oriented than ever, thanks to a new racing kit that comes with the bike and that allows you to transform it into a virtually race-ready machine. The kit includes a lightweight front light with simplified wiring to eliminate the ignition switch and instruments, number holders, a LED tail light and rear mini-number holder, lightweight throttle control with no starter and with a more gradual cam. Installation of this racing component kit takes another 2 kg off the overall weight of the bike.

Even the accessories are the best you could wish for. Though the RXV already gives you the best enduro performance you can get, Aprilia’s engineers, working closely with Akrapovic technicians, have boosted exhaust performance even further. The Akrapovic side exhaust kit is available in either steel or titanium, and comes with dedicated ECU mapping. This race-only exhaust reduces weight and boosts power over the entire rev range, especially at low revs. The kit has been developed primarily for use in Extreme racing, the most challenging of all enduro specialities though Aprilia’s official riders have already used it in conventional enduro competitions too. Now the kit is available for all those enduro fans out there who really want to get the most out of their RXV.