The bike has a Spur gears transmission. Power was moderated via the multi-plate wet clutch. 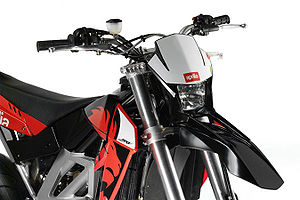 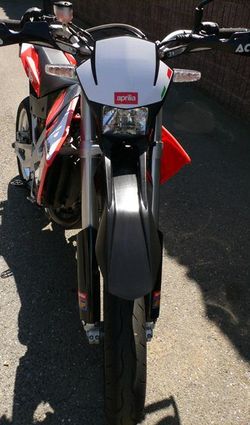 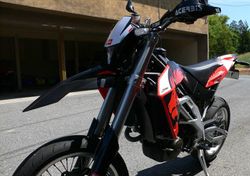 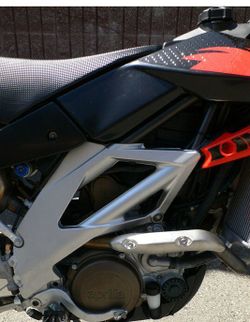 The 2006 MY Aprilia SXV 550 is, arguably, one of the most powerful supermotards available on the market, thanks to its liquid-cooled, four-stroke, 549cc, V-Twin powerplant mated to a five-speed manual transmission, and produces a claimed 70 horsepower.

It boasts standard features such as a 48mm upside-down fork, an adjustable monoshock as a rear suspension, front and rear disc brakes, laced wheels, a modern and aggressive-styled livery, a digital instrumentation panel, and an electronic fuel injection (EFI) system.

The 2007 MY Aprilia SXV 550 sports a liquid-cooled, four-stroke, 549cc, V-Twin powerhouse paired to a five-speed manual transmission, and produces a claimed 70 horsepower. Standard features include a 48mm upside-down fork, an adjustable monoshock as a rear suspension, front and rear disc brakes, laced wheels, a modern and aggressive-styled livery, a digital instrumentation panel, and an electronic fuel injection (EFI) system.

In case you felt like the 2007 SXV 450 was not delivering enough evil, Aprilia has prepared the SXV 550 version, a supermoto machine which is ready to take on both urban traffic and the race track. A beastly racer in a street-legal guise, the 2007 Aprilia SXV 550 is hard to beat in most occasions, especially when ridden with a daring hand.

The chassis and brakes have been upgraded, and many of the bikes parts are indeed ready to race, from the bars to the brakes and digital instruments. All they need is a bold rider to show the rest who's the boss.

The 2008 Aprilia SXV 550 is a half-liter supermoto machine created for the riders who dare. Powerful and with surprising amounts of torque already available from the lower rpm range, this bike was engineered to be ridden hard. It is one of the best machines if street supremacy is what you're after and it is probably the best city slicer out there.

And with a race-derived mill at he heart, the 2008 Aprilia SXV 550 is ready to take on almost anything, from filtering ahead stuck urban traffic to blazing highway hauls, weekends at the track and even outings on unsealed roads. Needless to say that shoeing it with dual-sport tires means you've got a nifty off-road bike...

And if you're in for some high-adrenaline track fun, load in some slicks and prove your skills at the track racing your friends during weekends. Street-legal and evil, the 2009 Aprilia SXV 550 is probably one of the top urban predators.

A 550cc supermoto beast such as the 2010 Aprilia SXV 550 is a force to be reckoned with, both on the street an on the race track. Derived from Aprilia's racing program and sharing many of the components and technologies used in the pro-class bikes, the 2010 SXV 550 is not eactly a toy for inexperienced riders. It is easy to ride and intuitive, but can instantaneously become a savage beast for smoking rolling drifts.

With premium suspensions and multiple setup possibilities, this bike will perform brilliantly both as a city slicer and as a track-fun machine. All it needs is a bold rider.