The bike has a Spur gears transmission. Power was moderated via the multi-plate wet clutch.

It came with a 120/70-17 front tire and a 180/55-17 rear tire. Stopping was achieved via 320 mm stainless steel disc with radial caliper in the front and a 240 mm stainless steel disc with floating caliper in the rear. The front suspension was a 48 mm upside down fork with two adjustments while the rear was equipped with a Hydraulic monoshock with compression and rebound adjustment. The wheelbase was 58.9 inches (1496 mm) long. 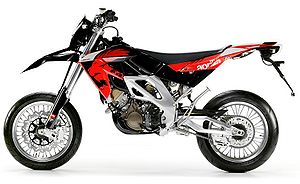 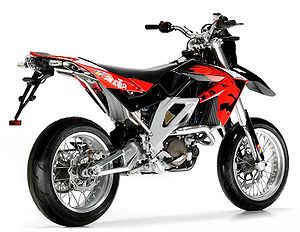 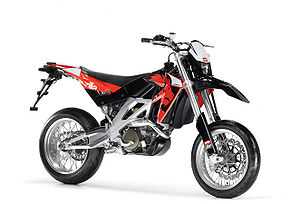 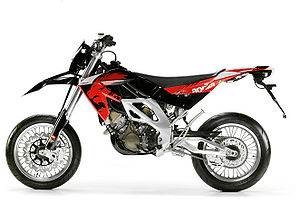 Aprilia is re-inventing itself. Renowned at the end of last century as a purveyor of championship-winning sportbikes (some kid named Valentino Rossi won 125cc and 250cc world titles on them), the Italian company is, in the wake of its recent purchase by Piaggio, returning to its off-road roots. The 2007 model line will include no fewer than four off-road models featuring 450cc and 550cc engines in RXV enduro and SXV supermoto versions.

Dirtbikes or not, these latest Aprilias glisten with Italian style. The achingly gorgeous frame consists of a tubular-steel trellis interference-fitted to pressed aluminum side plates that wrap down to support the braced, box-section aluminum swingarm. Even the exhaust is stylized, the muffler pulling double duty as the rear subfender before terminating in dual outlets under the seat. The most unusual facet of the design, however, is the engine--it's not the typical carbureted single, but a fuel-injected, 77-degree V-twin.

I had a chance to ride an SXV 450 in conjunction with a West Coast Supermoto School at Northern California's Stockton Motorplex. While both the RXV and SXV are street-legal overseas, they have yet to be homologated for the U.S. market so will initially be labeled For Competition Use Only. Furthering that intent, the bike I sampled had been race-prepped by WCSS principal Darrick Lucchesi, stripped of its lights and fitted with 16.5-inch rims shod with Dunlop slicks in lieu of the stock 17-inch street tires. Everything else, however, remained stock.

Plop down in the narrow saddle and the SXV feels tiny, and it doesn't get any bigger after you push the starter button. It's so quiet you almost can't tell it's running. Even at speed, students said all they could hear was the Aprilia's footpegs tinkling on the pavement behind them.

That quietness is deceptive because the SXV 450 is surprisingly powerful. Aprilia claims 60 bhp (70 for the 550), which is 10 or so more than a comparably sized single. The thing is, it doesn't feel that strong. Roll on the throttle at a corner exit and the power comes in small traction-producing pulses, as opposed to the big traction-disrupting bangs of a single. It doesn't tend to wheelie like a single, either, it just drives, drives, drives. Hold the throttle to the stop, let the revs rise to the 13,000-rpm redline (titanium valves, dontcha know) and there's very little vibration despite the lack of a counterbalancer. Statements about speed are largely irrelevant at a go-kart track, but the SXV was able to reel in all but the fastest 450s and 525s on the straights.

That said, the V-twin's real advantage lies not in power, but in handling. With its small crankshaft located close to the front wheel it has mega front-end grip, which, combined with its stout 48mm inverted fork, means zero chatter. Further, the reduced inertia of that lightweight crank makes it easy to flop the bike from side to side, which is what you spend most of your time doing on a supermoto track.

It should be a lot of fun on the street, too. Traditional supermoto singles are fun but slow, while the new generation of twins such as the KTM 950 SM and forthcoming Ducati Hypermotard are fast but heavy. The SXV--particularly in 550cc guise--may just strike that perfect balance. The competition won't even hear it coming.

The 2006 MY Aprilia SXV 450 sports a liquid-cooled, four-stroke, 449cc, V-Twin powerplant paired to a five-speed manual transmission, and can produce a claimed 60 horsepower at 13000 rpm. It comes standard with front and rear disc brakes, a 48mm upside-down telescopic fork, an adjustable monoshock as a rear suspension, laced wheels, a digital instrument cluster and a race-derived livery. 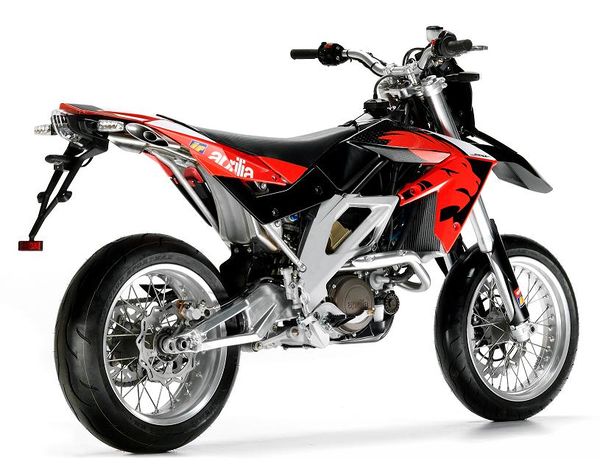 The 2007 MY Aprilia SXV 450 is a gritty supermoto, suitable for the more adventurous among Aprilia fans. It comes standard with front and rear disc brakes, a 48mm upside-down telescopic fork, an adjustable monoshock as a rear suspension, laced wheels, a digital instrument cluster and a race-derived livery. At its heart lies a liquid-cooled, four-stroke, 449cc, V-Twin powerhouse mated to a five-speed manual transmission, and can produce a claimed 60 horsepower at 13000 rpm. 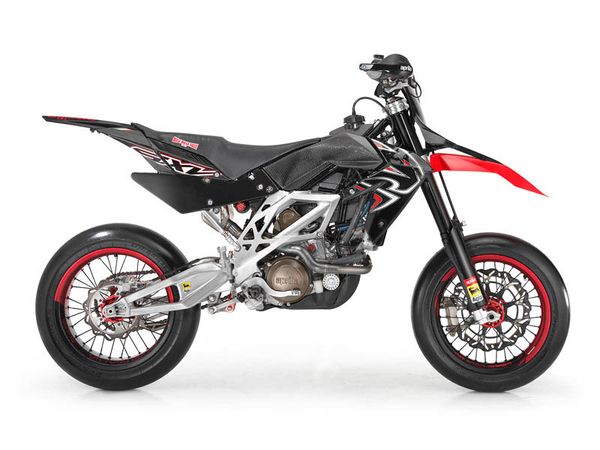 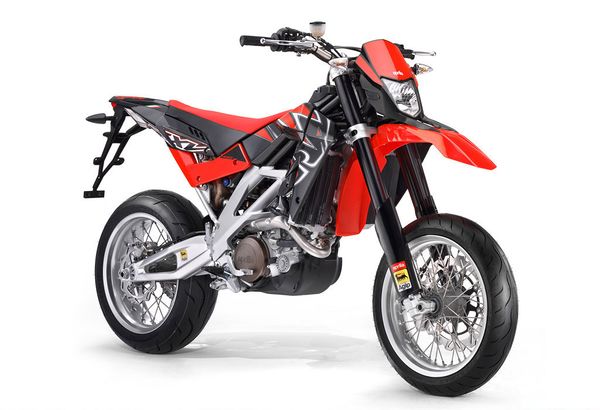 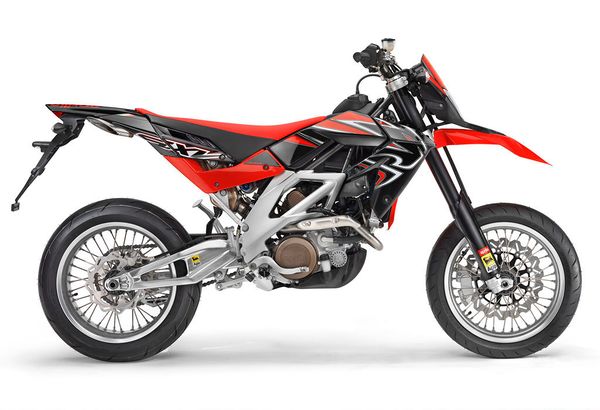 It's no use racing a guy on the 2007 Aprilia SXV 450: the only grounds where he will accept defeat are either a superbike race or an enduro one. For the rest of the places, this bike is a fierce opponent, because it represents the embodiment of Aprilia's racing expertise and the top-level engineering, resulting in a motorcycle which spells road supremacy.

Powerful and exceptionally maneuverable, this supermoto beast is extreme fun in the hands of the skilled rider. Hard to beat in the urban traffic, the Aprilia SXV 450 is not shy to step on the race track or off the asphalt for some rougher time. 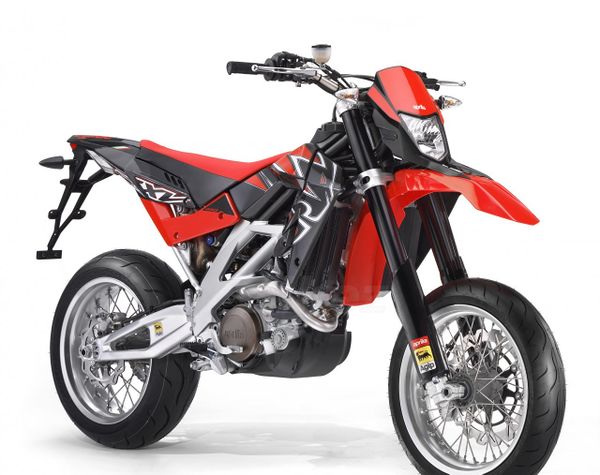 Save for muddy roads and rocky trails, the 2008 Aprilia SXV 450 can go anywhere, and ride in style. A supermotard is of course one of the most thrilling bikes ever made, and this one is not making an exception: robust, compliant 48mm front suspensions are matched by a pro-grade rear shock, while the sporty laced rims are show with grippy tires.

With sporty ergonomics, the SXV 450 can be ridden hard and can be ridden fast, in and around the city, as a daily commuter or as an evil track machine for the weekends. If anything, this is a well-educated hooligan bike engineered to deliver massive fun. 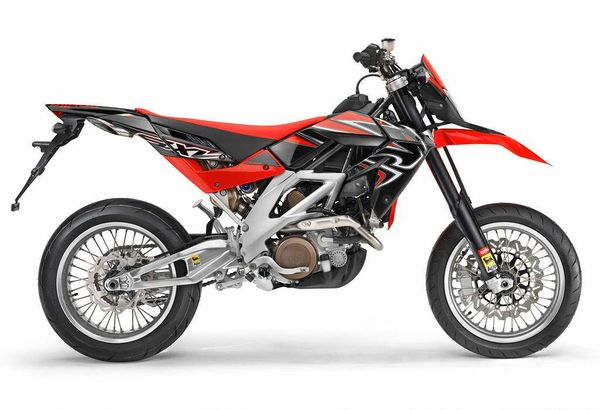 The 2009 SXV 450 is a supermoto machine which will deliver immense fun for the daring rider. Street-legal and suitable for the track, too, this machine blends in the sport bike power delivery and savage character with the elite suspensions and maneuverability of off-road motorcycles.

The result is a machine which will dominate the urban traffic with ease. Powerful and nimble, this bike can serve as a nifty daily commuter and a weekend fun machine, as well. If you're into high-adrenaline biking, then a supermoto beast could be your thing.

The 2010 SXV 450 is a light, aggressive and incredibly fun machine engineered to deliver solid fun for the daring rider not afraid to push the limits a little further. The 2010 model brings comprehensive digital instruments, a new race-grade electrical system, and multiple other elements which are derived straight from the Noale manufacturer's racing programs.

Slender and compact, the 2010 SXV 450 exhibits the grippy tires and massive forks, eliminating any possibility of mistaking this machine for anything else. Equally evil on the track and one the street, the SXV 450 is an exceptional, hard-to-beat commuter.